Anyone else using the Daiwa vega .4g spoons offered by Chris? These are amazing fish catching spoons for tenkara rods. I have been using the gold and nightmare spoons recently. They flat out catch fish!! Highly recommended.

I’ve not yet fished with any of TBum’s Daiwa spoons. But I do have a few of them.

A couple of months back I ordered 4 of the Daiwa Crusader 4 g spoons. 3 color GR (red/gold) and 1 color S (silver). However, these are spoons for use with a spin rod rig.

I didn’t buy them to use with a rod. I ordered them with the plan to see how they would work when hand line fishing while at the N.C. outer banks. Top Sail Beach.

But, unfortunately at TCB I couldn’t find any suitable place to try them on the sound side. And clearly I couldn’t cast them far enough out into the surf to be effective. I am more familiar with the area at Atlantic Beach, Morehead City, where places to fish on the sound are not as restricted as at TCB. Hand line fishing is not something I do in fresh water. At least not often. Mostly it’s just something I do in salt water. It’s something I started as a way to kayak fish. But I did not take my kayak this trip.

I’ve used larger heavier spoons before and they will cast farther than you think they would. Not yet sure if I can cast a 4g very far with a hand line. It is a challenging way to fish. Just don’t get a line loop over a finger or hand in case you hook something bigger than expected. Underhand the line to avoid a line burn.

Thanks for the recommendation of the Daiwa spoons. Though my spoons are different model from yours. Maybe they will work as well when hand line fishing.

i’m gonna try some for sure… You know i do a lot of warmwater fishing, and some of the places i go are SUPER pressured. Willing to try whatever lol.

Going by how fast they sold out, I was not the only one who liked them! LOL! I’m hoping he gets more color options on the next order. We all know spoons catch fish. What is so unique with the .4g Vega spoons is that they work so well as a “fly spoon” on a Tenkara rod. Using the Tenkara rod allows for the same adavatages you get over western setup when it comes to drifts, precision, and even jigging the spoon. The control over the lure is much better than a spinning setup IMO. I have used the spoon on both spinning and Tenkara. The spoon is so light I would recommend no greater than 2lb line for the best casting and presentation on your UL setup. However, I prefer the spoon on a fixed line setup after trying it. I would fish it with any Tenkara style rod you throw a streamer or nymph setup. Big credit to Chris Stewart for always giving me new tools for the fish box!

it is a threat to fish

I’m hoping he gets more color options on the next order.

However, Daiwa seems to own the market for < 1g spoons.

Tenkara Fishing with a spoon lure is not as new an idea as I assumed it to be.

In this May 2009 blog post, about how to make your own spoons, 自作スプーンの作り方 。
He writes that he also tenkara fishes with flies, but frequency fishing with spoons is over 50%.
テンカラとフライもやるけど頻度でいえば50％を超えている。
https://blogs.yahoo.co.jp/tsudakin2001/1344119.html

He also states that he orders his spoons from America. Apparently ordering split rings and hooks of his choice. Assembling the spoons after painting them. This following link was in the comments to the blog.
http://www.jannsnetcraft.com/casting-spoons/

Spoons are back in stock…three new varieties as well. I bought a few to try…I’m glad I’m not a fly fishing purist!

I bought some new colors myself! If you have used them , then you know it’s like cheating! Love them !!

I haven’t yet but I’m excited to try. Do you jig/pulse them? Dead drift? Pull across current?

Yes, all of the above. I have found no wrong way to work them! The fish will tell you what they want.

I am not a tenkara purist, but I am still on the fence on pulling the trigger on these.

When I spin fished, I found that small spoons where absolutely deadly. You could get all the fish in a pool in a frenzy fighting over them. Usually holding them in a seam or in the middle of a quiet pool and jigging them in place was the ticket. I suspect, it starts by just annoying them to strike, then it turns into a competition for food as the other fish in the pool start swiping at it.

It became so easy, that I found trout fishing sort of boring. Yes, there were times where the fish would not take the spoons or just swipe once…but most of the time it was the fastest way to connect the dots.

I cannot put my finger on why I am resisting trying them. I do use non-tradtional tenkara flies and worm patterns that would furrow more than a few brows. I guess I am not ready to revert yet, or it may be linked to using flies and lures made by my own hands. Perhaps I will try to make my own spoon. Still circling on this.

It will be interesting to see how I feel about these after trying them out. At present, I have never (yet) complained about easy days on the water…including days where I have been able to catch fish on a dry fly on every second or third cast. At present, I have also not had any impulse to tie my own flies though, so I can see how that would be a major differentiating factor.

Fortunately for me, I’m making this all up as I go along. If I find out that I enjoy fishing the spoons, I’ll fish them. I won’t stop using dries though (too fun to watch the takes on the surface).

Not sure if it is a local thing or superstition. I found gold spoons would out fish other colors. If I had to pick gold and nightmare would be the ones I would buy. Gold as a goto…nightmare possibly having an edge in lower light or stained water.

I totally get the point that we are out there to hook and land fish. One would say it would be foolish not to use a method that works. That is my internal debate. I have friends who scoff at my use of worm patterns. I cannot say the peer pressure doesn’t effect me. In a way that philosophy is just nonsense. In the same breath, I believe that skill and technique in fly presentation can convert fish. There is no way to develop that technique if I am slinging worm patterns and spoons. This is where I need to have more discipline. I totally understand how it may not be for everyone…and there are days where it definitely is not for me either. Sometimes I just want to hear the rod hum…loaded up with a nice fish.

Do these come with a split ring on the front, or do you need to install one yourself?

If they don’t come with one, what should i search for when looking for one? What’s the best way to tie one on, obviously not a Davy like I do all my flies… Some kind of loop? Double surgeon?

holy shit, there are .3g spoons out there:

Great performing lure. Similar to casting a fly tied with a Wapsi jig head or a heavy beadhead nymph. I caught fish when using them with a tenkara rod and while using a western fly rod. I prefer to use them with the western rig. The spoons worked well in the slack water areas. 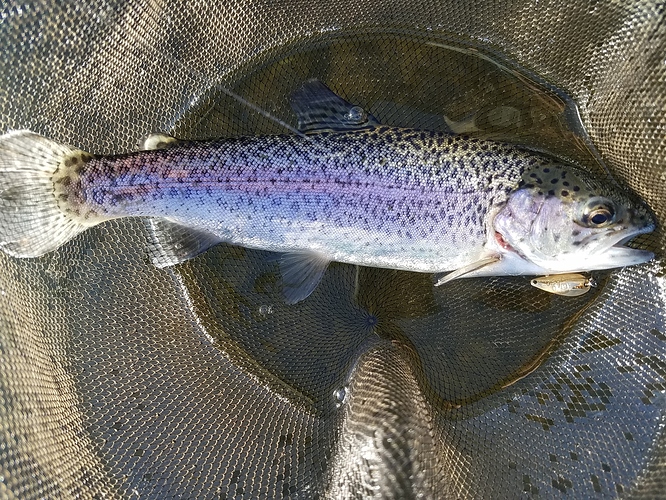 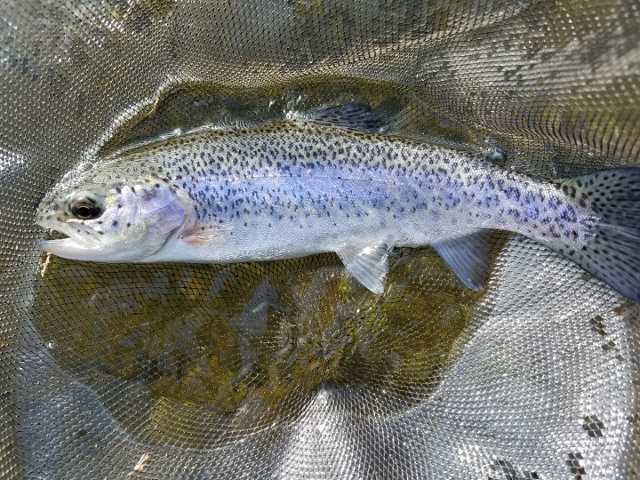 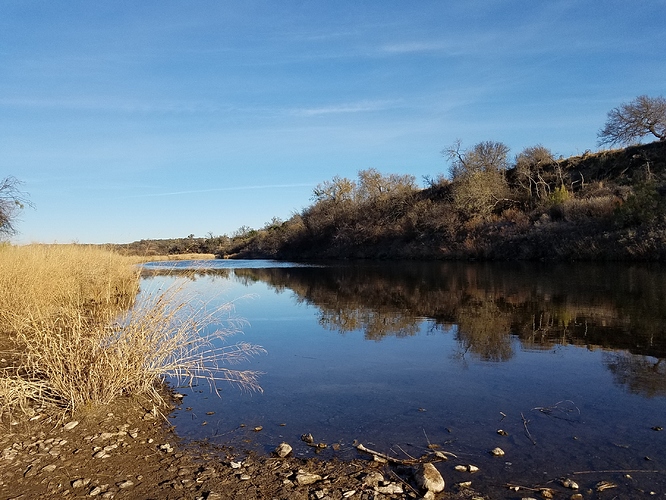 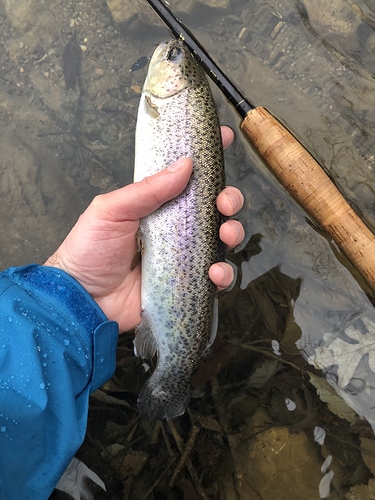 Slow day today but the spoon worked for this one.