As mentioned earlier in another forum thread. I recently went to a Quilt Festival in Tenn. There were many types of threads shown by vendors that I thought - Hey, some of these might make interesting flies. YLI = Yarn Loft International.

Here are a few of them, (sorry for the unsharp pictures, couldn’t find my camera tripod to hold the camera steady. ) 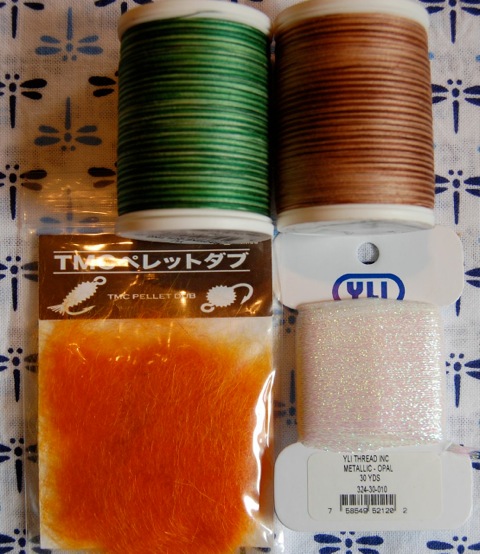 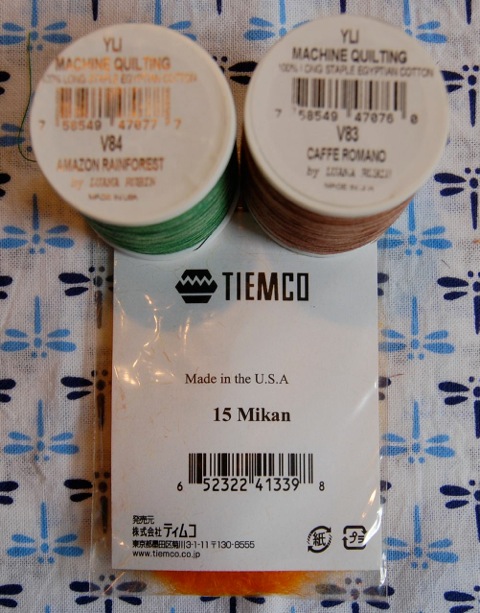 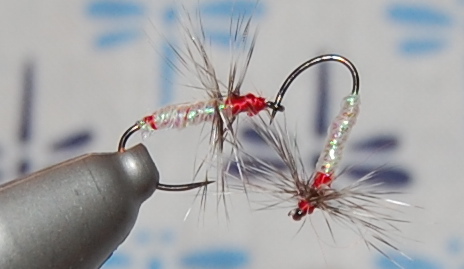 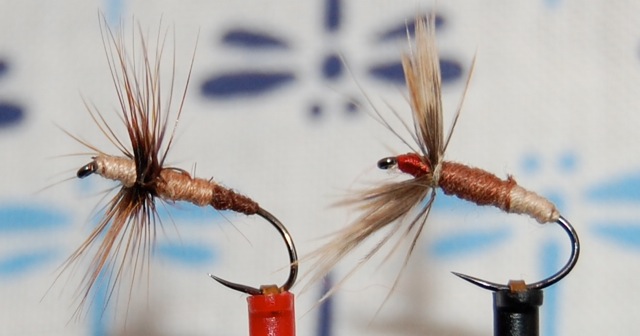 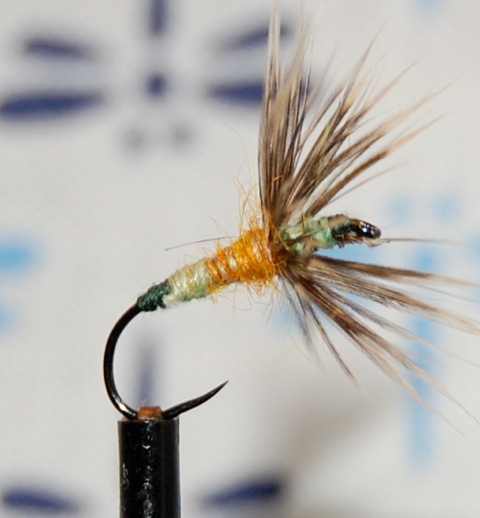 I thought the Metallic Opal Floss looked rather scaly and the variegated thread (that changes color every few inches) might allow interesting contrast, without having to use two bobbins with different color thread on them.

The TMC Pellet Dub is made in the USA, but oddly I only find it for sale in Japan.
https://www.tiemco.co.jp/eng/groups/view/132

I am not a particularly neat fly tier. I don’t think the fish care, they may even prefer messy flies.
If they actually are attractive to fish. Great. I have materials to tie many more.

If not, well, the thread will be useful other things. And a sharp knife turns a useless fly into a hook awaiting a second chance.

My wife is off to another quilting class today. Following three quilting or embroidery classes last week.

I have several spools of variegated threads in different color combinations. They are fun to tie with because you never quite know what the final product will look like. You choose your color pallet and see where it takes you. I have produced some interesting looking flies. Mine are a different brand than yours but my favorite color is a lot like the green one you have pictured. Of course, that just means I would eat it, don’t know if it makes any difference to the fish.

I have caught a good number of fish with greenish flies. Probably most were tied with Ultra-thread chartreuse shade of green.

With the variegated thread just make the starting color of the winding to end up with the shade you want to cover most of the body or head of the fly. After a few tries I find I can get pretty close to what I wanted. But it’s also a bit like Forest Gump’s box of chocolates.

I visit quilting shops and shows with Mrs Brian when we are travelling to look for materials and tools. After reading @dwalker’s posts about YLI ribbon floss I’ve been looking for it! Apparently not very common out here.

Last week I gave a Tenkara presentation at a Fly Fishers International club and prior to the formal meeting’s start they had a member tying chironomids using some Sulky Holoshimmer and Variegated threads he’d picked up at Joann Fabrics on a two-for-one sale. He used it in different ties as the primary body color or ribbing.
https://www.joann.com/sulky-holoshimmer-250-yd/xprd74017.html

Dazzleaire yarn is not being produced any more and my wife’s friends who knit tell me it was terrible to work with because it tends to stick to-bind up on itself. When Mrs Brian and I are in a fabric-quilt shop that carries yarn I always ask if they have any. Several years ago I picked up a box of skeins at one small town quilt-fabric store from the owner who had it in her attic at home and just wanted to get rid of it. She even had her husband bring it into the shop for me.

The acrylic-nylon blend yarn doesn’t absorb water and has a lot of clear reflective filaments spun into it along with the primary color. I pull apart the braid and was using two strands that created a rather bulky body but lately I think I prefer using one strand for building up a trimmer tapered body. After finishing the fly I usually pick out the yarn with a very narrow strip of Velcro hooks. Many-many fish have taken dry flies, wet flies, and nymphs tied with Dazzleaire bodies.

I also am “not a particularly neat fly tier”. 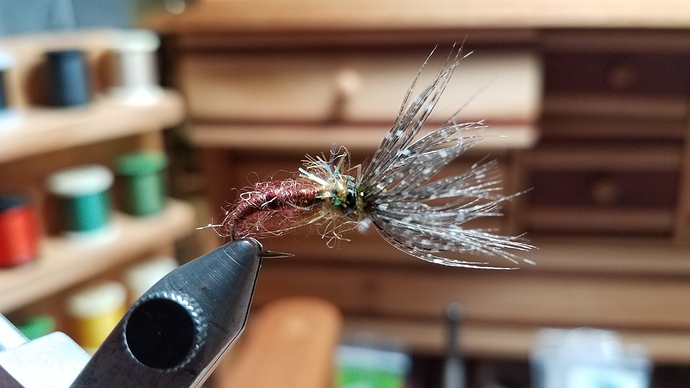 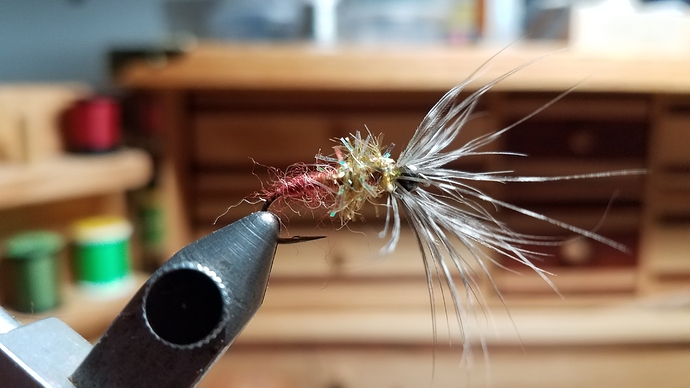 By chance I stumbled upon Justin Bruce YTC, tying what he calls his Houdini Fly. On which he weaves dark and light color wire on the fly body. The idea is to have one color dominate on the top, and the other color to dominate on the bottom side of the body of the fly. Dark on top, lighter color on the bottom.

I thought, why not try doing something similar with dark and light sections of my variegated thread.
The first try was a redo as I got some of the over-under, under-over steps out of sequence. But the experiment was partly successful. The cotton thread just lays flatter than Justin’s wire thus a less segmented look. I made a mess of the peacock collar, but I was rushing the tying. My tying table is the kitchen table, and meal time was quickly approaching. Anyway, the under-over, over-under steps are easy after doing it once or twice. 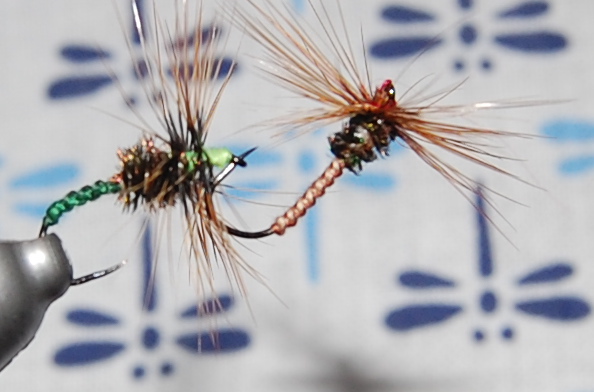 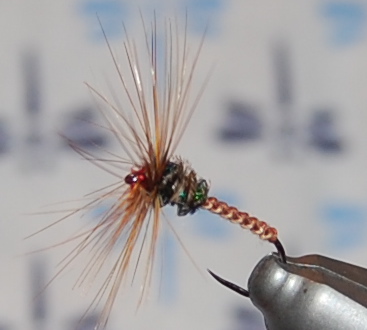 In one video he methods Polish Weave, used in tying nymphs. I had never heard of it, but an internet search finds many examples.

I kind of doubt the two color weave is any more attractive to fish than just wrapping thread or wire round the hook shank. It probably catches more fly tiers than fly eaters.

But tying a fly this way is kind of fun, and something different to do when tying a fly. And who wants to do production work - repeating the same thing over and over the same way. I never did. That’s why I avoided production type work. Opting for something closer to Forest Gump’s Box of Chocolates.

I kind of doubt the two color weave is any more attractive to fish than just wrapping thread or wire round the hook shank. It probably catches more fly tiers than fly eaters.

This! Woven body flies were popular among FFI conclave tiers several years back. I won some woven Prince Nymphs in a club raffle. Never fooled - hooked any fish with them. I did hook some trees

"… I have to always remember to use my go-to line with my first time fishing friends: “Just have fun.”

That is why I love this Houdini Fly. I’ve sent samples across the country and have received reports back informing me how anglers had Euro nymphed the fly; others mentioned they had dropped, dead drifted, swung and stripped it. The darn bug seemed to catch hold of fish everywhere. Do I think I cracked the formula? No. I think these anglers fished a fly that had a buggy profile, movement, and was the right size for the water they were fishing. …"