I do most of my fly tying during the winter, when it’s cold and dark. It’s something I enjoy for it’s own sake; probably owing to the fact that I learned to tie flies before I learned to fly fish.

I recently purchased the Discover Tenkara video that focused on Takahashi Shin and his tenkara nymphing (very well done, by the way). It got me thinking. I’m not a “one fly” kind of guy. No offense to those who are, that’s just not me. But, I did decide to do a “study” of the same fly tied for efficiently fishing different depths and conditions and doing so quickly. Using tails on my flies/kebari is something I rarely do, but felt it fitting for this series. I tied them in sizes 8, 10, 12, and 16. 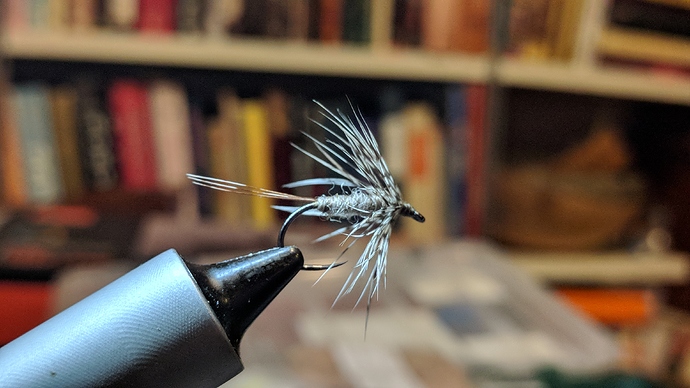 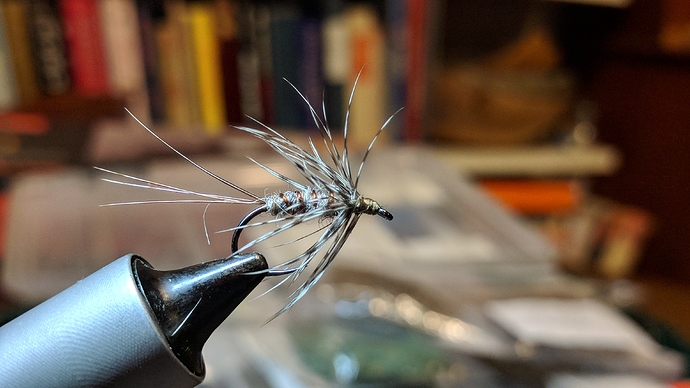 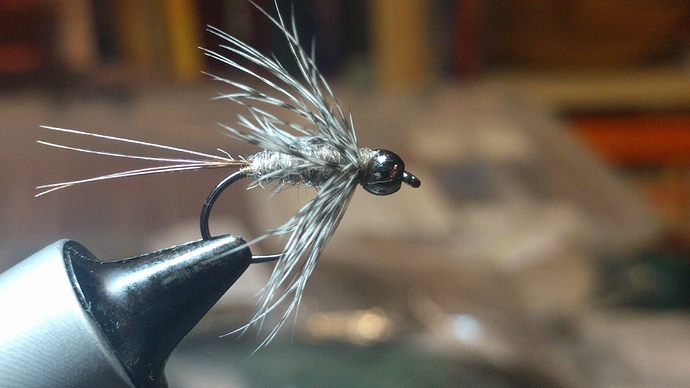 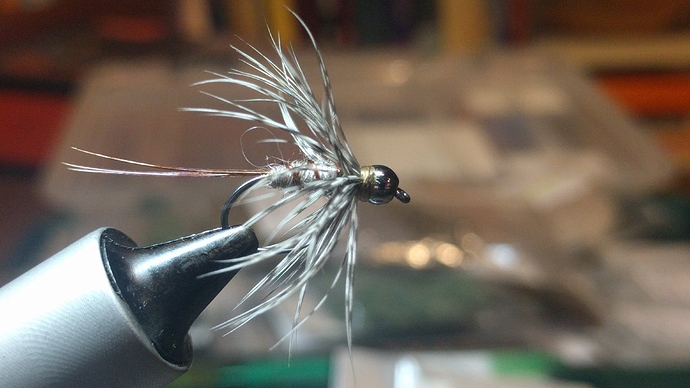 Very nice!
I do the same, tying in winter time. The time spent by the vice is as much tying as it is planning and dreaming I guess.

Sometimes I make a trip down south to open rivers.
Today I sure could have used some bead heads in the extremely cold water.

I feel your illustration is a critical concept, especially for tenkara, where there is a limit to sink depth…as our drifts are very short. Matching the weight to the presentation depth and water speed can make the difference between catching and not. I often cycle through different weights until I find the perfect balanced fly for the conditions. A fly that is delivered where I want it and one that I can maintain contact with but not too much. The line where there is equal lost and found. Getting this balance is more important than pattern to me.

Also consider sparser profiles and limiting or removing hackle on your deep divers. The less surface area, the quicker it will find bottom.

Yes, @Gressak that is exactly what I was thinking about with this. Specific patterns are something I rarely do and finding the right color, size, and weight that for the conditions and my manipulation are a few of the things that originally appealed to me with tenkara. The hackle on these is Brahma hen, not something I’m super worried about causing too big of an impediment to sinking.

Ahhh, so true Joakim. Especially when the weather has been below zero for the past three weeks. Yet I have three months from yesterday before trout season opens again.

I also figured I’d have fun and tie a few others as well. 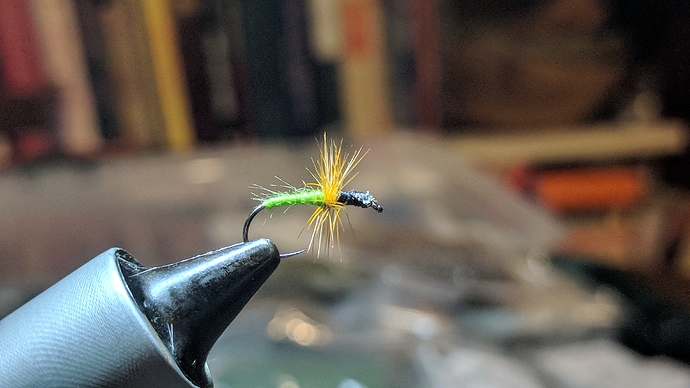 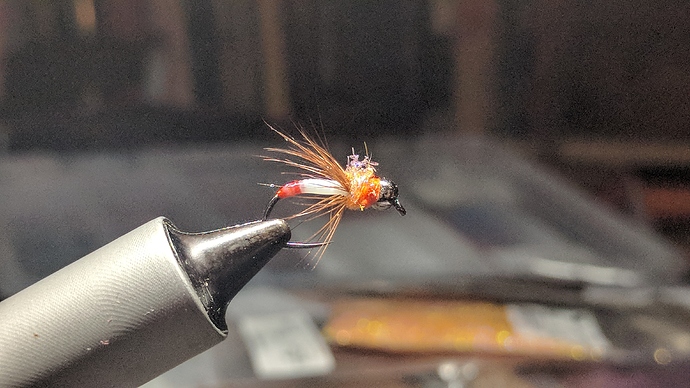 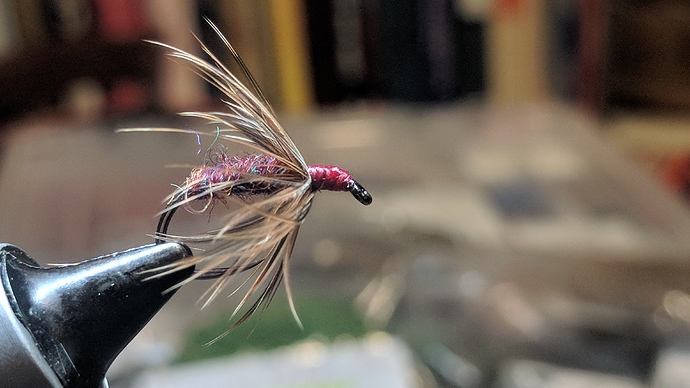 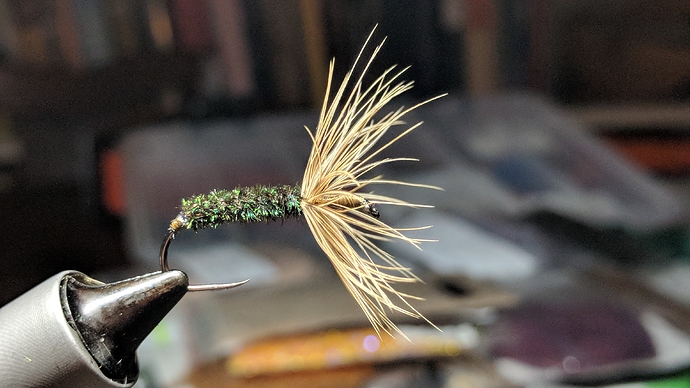 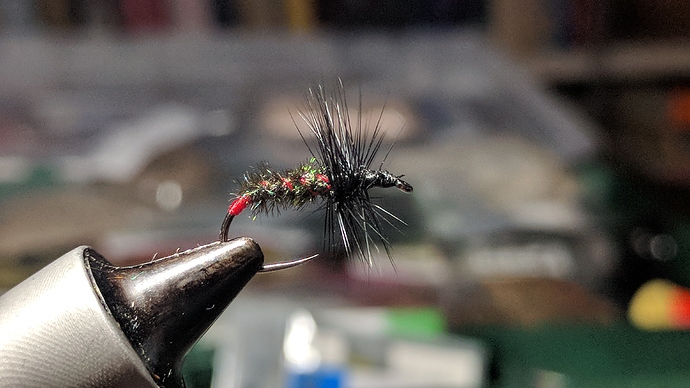 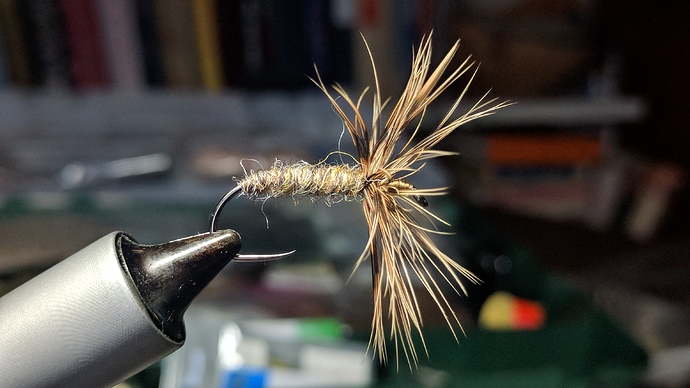 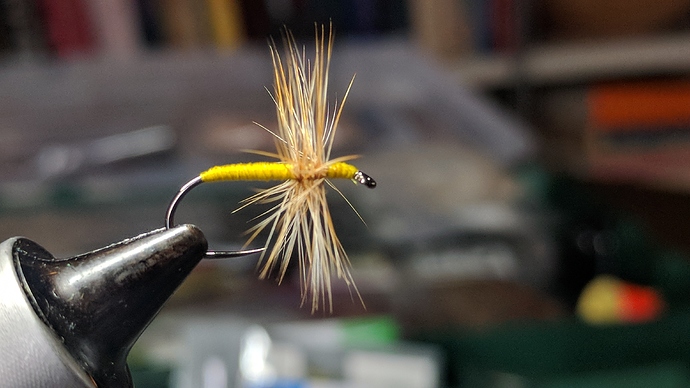 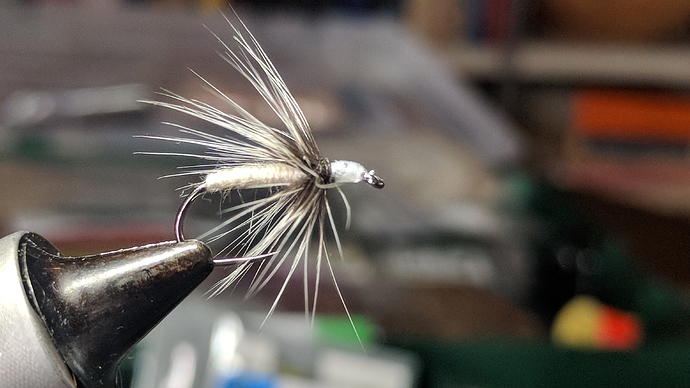 I too tie when I can’t fish and have been experimenting with some ‘Glitter thread’ which I came across just before Christmas. Costing Sterling £1 for 8 spools in different colours. I had to buy it.

Here is my first effort, simulating a ‘modern’ soft hackle or spider fly 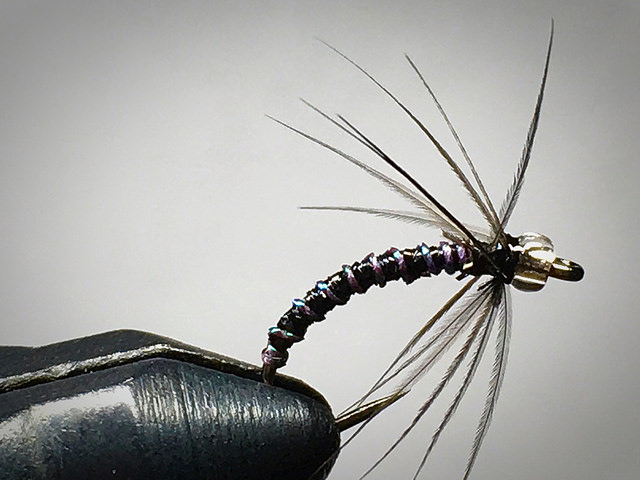 Very nice looking spider @davidsr! Interestingly enough, I was just reading about glitter thread this week end and wasn’t sure what to think about it. Very nicely done.

The photo below shows you the 8 spools and hopefully an idea of the thread. I have included a shot of a spool of Uni-thread 6/0 Black as comparison. The Glitter thread appears (to me) to be a very fine thread wrapped with the relevant colour of a very fine polyester, which gives a nice ‘flash’ to it.
I have great hopes with the stuff. 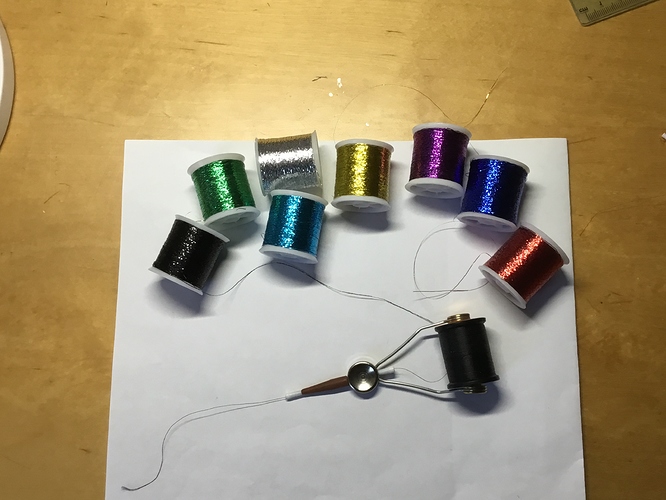 I have taken a chance and ordered some. It arrives on Wednesday. At less than Sterling £1 for a spool I couldn’t resist!

From what I read, it seems to be very popular amongst competition fly anglers. For that price, how could one pass on it?

There is also such an attempt 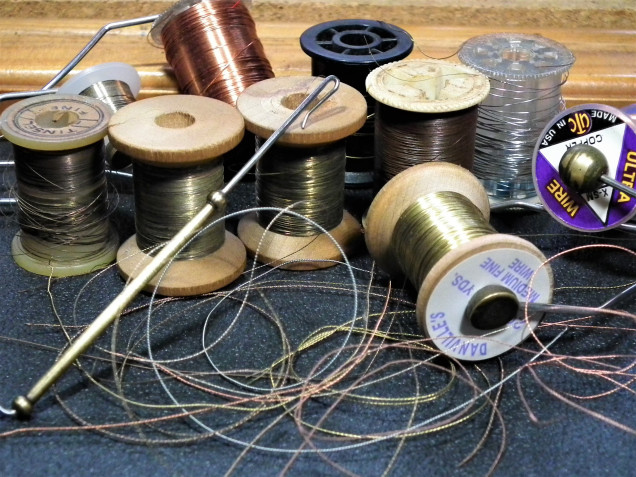 Twist ultra fine wires and twist Tinsel in between 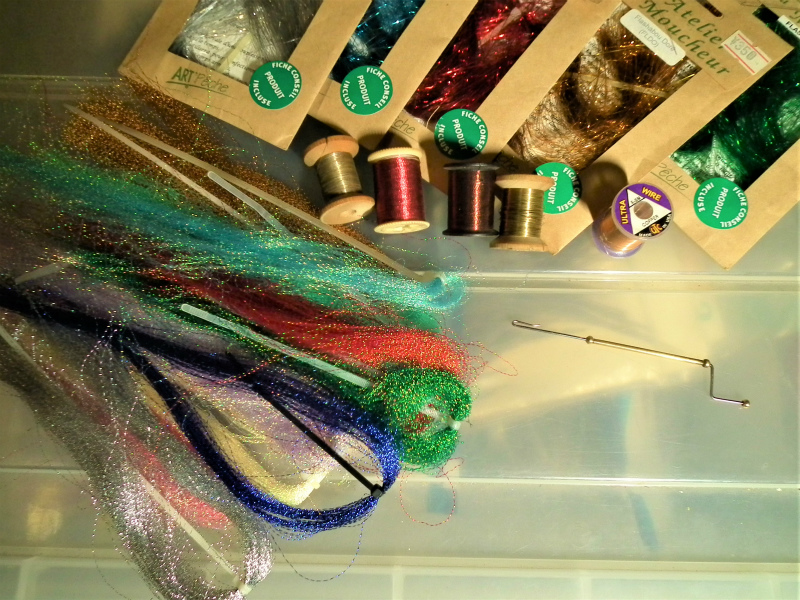 I can enjoy my favorite color combination and it’s tough 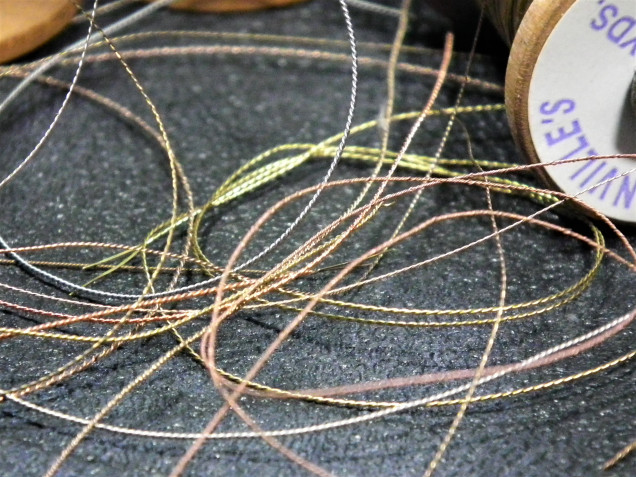 It is such an image 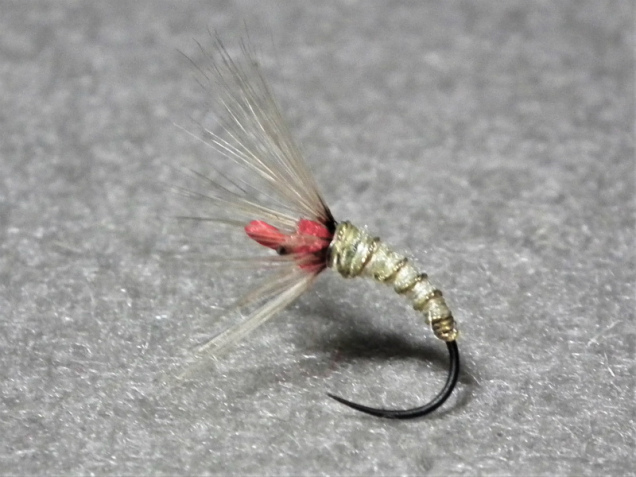 Cocoon of wild silkworm is body

It shines in the water

This is a great idea.

I have tried using it but regardless of how one ties with it the metallic bit comes unravelled from the thread. Basically it is no good for tying.

However the Glitter thread (photo in an earlier post) is quite different and is very useful.
David

Thanks for the update. That’s good to know.