Way down yonder in the Chattahoochee (Nat'l Forest)

Any time I’m about to take a trip somewhere, I investigate the opportunities for outdoor recreation. When a family trip to the Atlanta area was planned, I immediately identified the chance to not only hike the southernmost miles of the Appalachian Trail but also try and catch some wild/native trout. I camped in a beautiful spot where two very small and one small/medium stream converged to make a larger stream. My goals (in order of priority) were:

** - As someone whose formative years were spent playing baseball, I bristle when the term “slam” is used to denote a group numbering anything other than 4. A grand slam is 4…period. Three species of fish should be called something like a Turkey or three-bagger…not a slam. 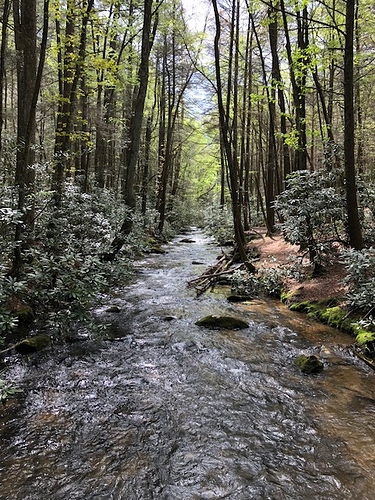 My camp near this stream, the largest of the three coming together at the confluence. I had no fishing luck in this stream at all. I decided to walk South on the AT which ran along one of the smaller streams. This stream was, in many places, very difficult to access and even harder to find room to cast. However, I managed to find this nice little run,… 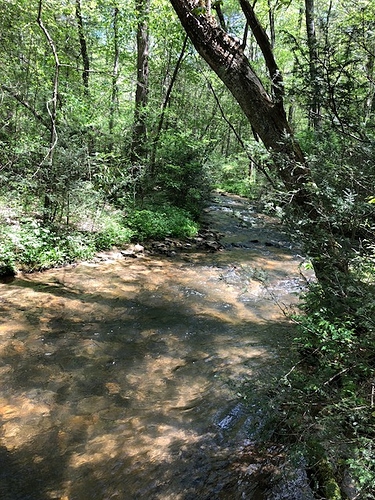 …which produced fish on back-to-back casts… 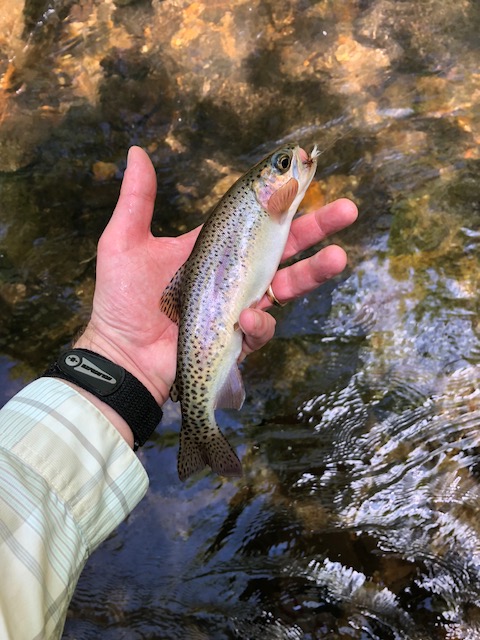 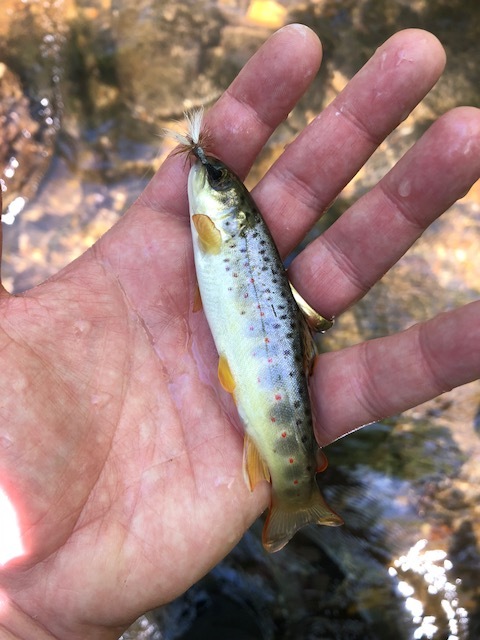 2/3 of the way to the three-bagger already and it’s barely noon on day 1. I wouldn’t catch anymore browns on the trip, but I caught several more glittering, spunky rainbows. None were bigger than the first, pictured above, but it was really a fine day of fishing.

Later in the afternoon, I went the other direction and fished another, even smaller and more overgrown stream. In many places, the mountain laurel and rhododendron grew together from each bank, forming an impenetrable arch above the water. I did manage to complete goal 1 and finish off goal 3 though (one of two brookies caught…the other was camera shy). 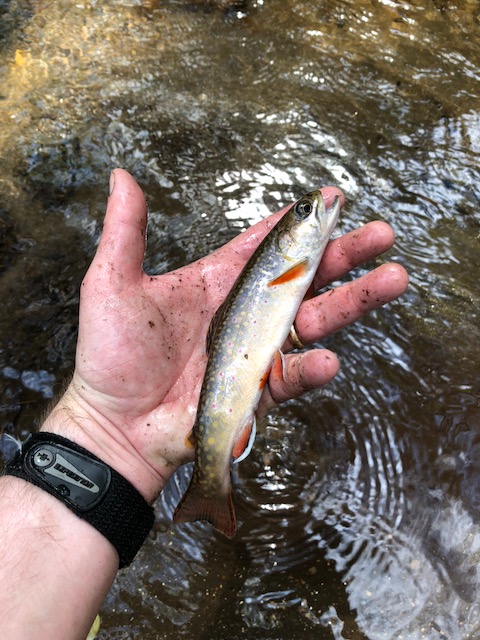 After a beautiful night in the woods, the next day brought a hike up to the summit of Springer Mountain and the first white blaze that northbound thru hikers pass. 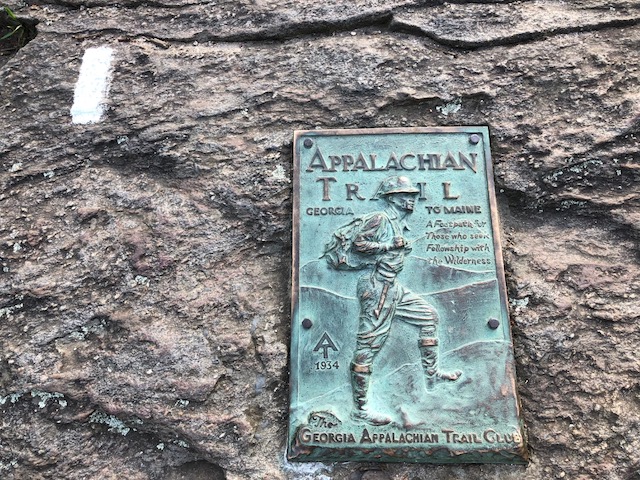 That afternoon, I slowly made my way out of the forest, pausing at every pull off to fish the largest of the streams…I caught a number of pretty rainbows, mainly on dry flies.

From a gear standpoint, I fished my Rhodo on the smaller streams and my Nissin Royal Stage 400 on the largest stream. All dry fly fishing on the small streams, dry/dropper on the largest (only one fish on the nymph though, so probably just a waste of effort fishing that rig).

All in all, it was a great 36 hours or so of hiking, camping and fishing.

Awesome report, Mike!
I haven’t been there yet, but i know EXACTLY where you were, and which streams you are referring to in each part, because i’ve scouted it online and talked to a lot of ATL area buddies about it so much hahaha.
This is one of the spots I so badly want to fish before leaving the South in 7 months.

Dry fly action is where it’s at right now on our Southern Appalachian streams.

That’s awesome. I’m jealous, I’ve tried for my “slam” in that general area, but still haven’t gotten my brookie on the same trip. (BTW, I agree with your assessment that a slam should be 4).

Not sure if it’s the same place, the area I like fish is near a spot named after ______. I was never really on the AT though, just in the water!

Yep we’re talking about the same place. It’s not exactly a secret but I still don’t like to hot spot.

Brook trout opportunities were definitely tough to find. I fished above some fairly substantial waterfalls on one of the streams and thought it would be only brookies but still caught rainbows. And the smallest stream is really tough to fish, even using my Rhodo at its shortest length.

Sweet, and understood about the hot-spotting.
I edited my post to remove even the vague reference I made.

I need to get back up there sooner than later.

The most obvious and well-known falls in that spot, which are still reasonable to get above for fishing, used to be brookie water but you can (likely) thank bucket biologists for bringing the bows above.

The little bitty flow is a well-published TU-restored/project stream for southern strain brookies.

I didn’t fish much (and caught nothing) above the big falls. 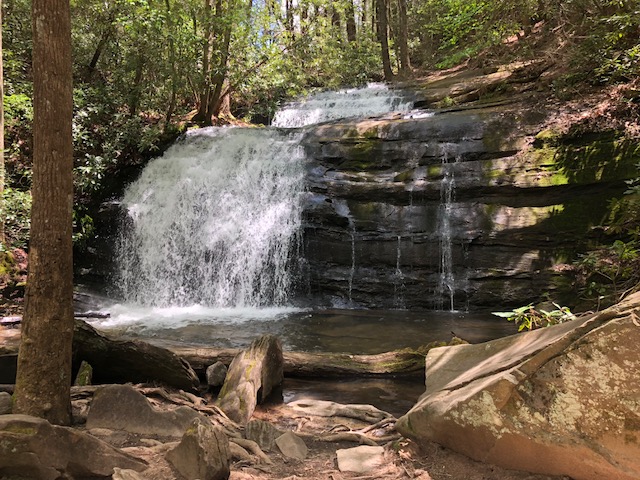 Downstream of that, though, there are at least two sets of minor falls (but still 10+ feet tall). I was surprised to find rainbows above those.

yup that’s the one. Everybody I know who’s fished that system was surprised to find little or no fish above that falls.
There are some surprisingly large rainbows (prob browns too) in one of the tribs. Two of my friends have caught 14-16" wild bows