Tenkara in the dark

I’ve seen a few posts here and there about fishing in the dark, but scattered throughout other topics. I was hoping to get people’s thoughts and tips on tenkara fishing in the dark (when do you go? gear you find valuable? any changes in tactics ? etc…). Thanks!

Most of my angling is in the dark. I have not fished tenkara in the dark, but I have friends that have.

My night fishing is in the surf and I mostly fish without a light, this includes landing and releasing fish. If there is a safety issue in landing or general transport I will use a red light or white depending on the situation. Preference is red as it keeps eyes adjusted to darkness(night vision) better than white. It is also said that fish are less likely to spook with a red lamp. I like lamps that have a separated red LED setting that you do not have to cycle through white light modes arrive at. I use the black diamond Storm.

Scaredy Cats
Most anglers are afraid of the dark and being in the dark, but to be productive fishing at night it is 100% necessary to fish without light, as trout and striped bass will react to moving shadow and light. It also affects our ablility to read the water. It takes a while to get used to it, and after a while you will be walking around in the dark. Once you do it really is fantastic and really a totally different way to experience nature. What happens at night is often magical and so many folk miss it all. The things I have seen. Once you get acclimated, a full moon is sometimes feels like daylight.

Tenkara for me is such a visual experience. Visual cues from my line, or a flash of a take is where I convert most of my fish. I would say only 30% fish commit with abandon and I feel them. Also much of the water I fish would be impossible at night because of the foliage density. Fishing tenkara at night is not a drive for me for this reason.

If I were to fish tenkara at night, I would fish patterns with a lot of feedback. I do this anyway, but stiff hackle patterns that anchor in the water and and can track progress by feel. My buddy targeted large browns at night and typically night time is opportunity for LARGE…and most often the presentations are large and often topwater.

My friend Mat designed a light weight mouse fly to cast using a tenkara rod. He and a friend targeted a pool he knew held large browns. He converted several 18" rainbows then finally hooked into a fish and lost several mouse flies to the same fish on the same structure. He finally gave up but instructed his buddy to cast his flyrod/reel to engage with the fish. This was the result: 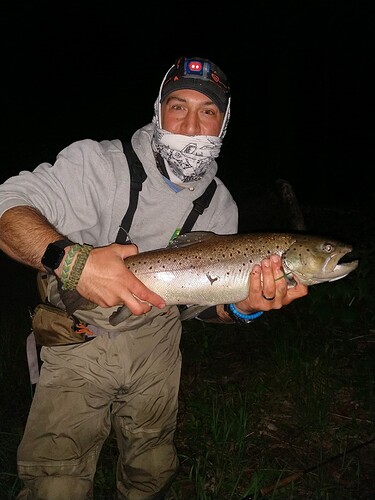 there is plenty of info online…just google. Trout fishing at night or lunar affect on trout at night. In general most fish will be more active at night because they are less likely to fall to predators and because they are largely nocturnal.

Trout Fishing and the Full Moon

The days can be slow, but the nights can be epic. I got an email from a reader the other day asking me to solve a fly fishing dilemma. He and a friend had fished hard the day before and caught very few trout. It was a perfect day, perfect water...

One thing to try too if you are bored. Try a night fishing session. I fish the ocean almost strictly in pitch black dark, I do occasionally fish the ocean in the day time…but the biggest of fish come in closer to feed at night. I have reflected on fishing tenkara at night, but most of my locations have too much foliage. If I suspected there were big browns around an area that looked like that, I would be temped to drag some offerings at night. Kebari, streamers, and a small mouse fly. with f…

I’ve stumbled upon one particularly fun hatch of sorts on a local freestone that gets very little credit as a fishery --and the feeding frenzy seems to peak as it gets dark and sometimes doesn’t last more than an hour total, with much of it in very low light. There are enormous numbers of craneflies and some caddis – I’m not sure if there’s anything else but when there is light you can see them dancing and bouncing with their egg dropping motions or whatever it is. On the way out a flashlight will show rocks covered with craneflies and everything from noseeums to bigger bugs in the air.

What I’ve found particularly nice about fixed-line fishing for it is that between the muscle memory of casting and the fixed length of line – with a little staging and pre-planning, you’re uniquely setup for success with very little light.

I’ll fish this one with jun & futsu wet flies and with dries. The main thing I’ve tried to do is be in position when it happens and get some practice casting done into the best locations (there are a few spots where this happens, some more open than others, and there are some branches to avoid).

The first couple of times I found myself very frustrated when I had a tangle or lost a fly, so I will sometimes go with two rods rigged and extended.

It was this event that was the partial inspiration for rigging a loop on the end of my line. I have largely moved away from this since I change flies/tactics very little in a given outing, but the idea was that at the end of my level line, I would tie a small perfection loop. I would then use 6-8" of level line with a perfection loop on one end and a stopper knot or tippet ring on the other. This way, I could use foam or small spools to have pre-rigged fly and tippet (whether nylon or fluoro, long or short, nymph/wet/dry, etc). The idea was I could probably swap the loop-loop connection quickly enough that it would be faster than trying to tie knots in the dark and I could deal with tangles later. A firm loop-loop connection with stiff FC level line is really not as bad as most people probably think it is…

While I’m not a big numbers angler or feel like stressing out about it – this spot is public but not so public, pretty much in somebody’s back yard (very angling friendly) and getting the most out of an event that has peak activity for 20-30 minutes seems like a worthwhile reason to plan ahead for things that will make a 5 minute task into a 2 minute one.

I’m back to stopper knots and/or tippet rings (what a rabbit hole I’ve been into lately on this topic) – so if I really wanted to maximize the time fishing, I would probably just rig up lengths of tippet and flies, possibly even with the tippet to line knot tied and ready to slip on for quick changes.

For strike detection, it is often an educated guess with visual clues (maybe) when fishing dries or wet flies held on the surface, or a feel when swinging/dragging/skating flies on the surface – this can work amazingly well. Even if the relative success rate is low for the fish activity, the relative catch rate might be the highest on a given day in this short window. The places I’ve had the most success in finding these good-at-sunset opportunities are often riffle fed runs – the “bug factories” as we’re told. I’ve seen foot long fish lunging their length out of the water (during the warmer months, that’s a respectable fish).

As for other advice – I think the usual night fishing advice is to know your locations well during high/low water when the light is plentiful and be careful – definitely have light and backup light for the walk out and in an emergency.

Thanks so much for the tips! I might try out the micro mouse patterns and doing some night fishing a larger, more still pool. I’ve got a nice headlamp with different lighting options.

Definitely share your findings. It will be fun to hear what you experience.