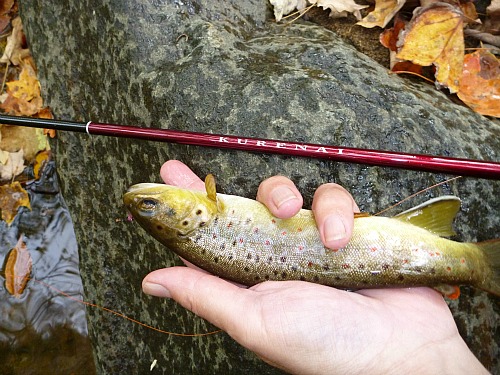 The Suntech Kurenai rods are the closest I've found to being the perfect rods for little wild trout in little wild streams.

I bought it because I have the brook trout bug and needed something specific to target 2-8" trout. I had been using my rhodo, which works fine, but is overkill for some of the smallest of these brookies.

I was wondering if any of you own one of these and have any insight you would like to share. I have not fished mine yet, but look forward to playing with this new toy. It is so light and delicate. The handle diameter is really small. I may need to beef it up a little. Considering the weight is under and ounce, adding a little is not gonna be the end of the world.

A couple of recent trips, I was catching 2-4" brookies. A couple, I accidentally sling-shotted into the bushes and had to rescue them. I figured it was time for a rod sized to the fish. I am hoping this rod is delicate enough to keep them leased and heads in the water vs the troutbuchet effect of the sato/rhodo. I figure a softer rod might also improve my hook to land ratio on these spastic little critters as well.

I caught some pretty big trout on the 33 I used to have. Didn’t seem to have any problems as long as I paid attention when the fish tried to run.

I would urge you to fish with the rod a few times before adding anything to the grip. I suspect you will notice that if you hold the rod with your fingertips you may find that the grip is more than adequate. A scalpel and an ax are both meant to cut, but a surgeon’s grip is different than a lumberjack’s.

Chris,
I was intending to employ a wait and see.
Its just weird and foreign to be fishing with a such a small diameter rod handle.

Do you fish this rod or series often?

It’s actually pretty intuitive the first time you hold the rod. You really can’t grasp the handle with your hand like a normal tenkara cork handle. The butt of the rod will naturally rest in the heel of your palm and then you can hold the rest of the grip with just your fingertips.

No. Way too many new rods that need to be fished, or for which I need fishing photos, and not nearly enough weekends.

I fished this rod for the first time this weekend.

I am used to my other heavier rods tb36 and rhodo.

I wonder if the rod is too soft. Had difficulties on hookset and strike detection. It really requires a different touch, that I was not able to dial in on the first outing. When I went back to the tb36 and I was back in business. Kurenai, is the first rod I have purchase that is dramatically different to the point where I feel I need a lot more adjustment time.

I like its size and how it casts. Gotta work on the catching part.

Stick with it. You’ll get the hang of using the Kurenai and once you do, I think you’ll really enjoy it. Hook sets take a bit more finesse for sure. It took me a few outings to adjust to my HM30, but I use it as frequently as possible these days.

I’m thinking of selling mine. It just doesn’t mesh well with me so far.

Which model are you fishing?

Can you share the details of you findings and what you dislike about the rod?

It mostly comes down to me liking slower, full flex rods more than ones with a tip flex. I also feel like people overhyped the whole “fish feel huge on this rod” thing. I bought the rod to maximize enjoyment out of 6-10 inch fish and honestly, I enjoy that size range just as much on my Oni Type 3 or Watershed 300z.

The HM30 works well with a light line, but I just don’t enjoy casting that rod as much as the others I mentioned. The reality is I cast more than I hook fish, so a big part of what I look for in a rod is how it feels when casting.

Thanks. I think all information sort of helps round out a review of the rod.

I still need to give it more time.

My intention was to use the HM30 as a small stream 2-6" brook trout rod. I really do not feel its the right rod for 6-10 inch fish. I am sure it can handle them, but a regular tenkara rod is probably a better tool. I still need to figure out if a regular tenkara rod is a better tool for the 2-6" fish or the HM30. As I noted, I was having trouble with feeling hits. I think the soft tip was absorbing all the feedback. I only seemed to hook the most aggressive commits. The fish I did land were pretty small and I think the rod’s softness helped keeping them on the hook…and in the water. Compare that to the rhodo…that I was using as a troutbuchet …and sending them into the bushes.

As for strike detection, I never rely on feel alone. I often see movement from the line before I feel anything.

I liked that it was soft, I just didn’t enjoy the flex profile.

I was just noting that I did not buy it for that size fish. I have plenty of other rods I am happy with for targeting normal and larger sized trout.

I wanted a lighter rod to try to match the target better.

Most of us use sight as part of our strike detection, but I do equally rely on feel. Especially as a fly drifts through whitewater or through a shadowed pool. We miss more fish than we realize. I have seen plenty of fish sample and spit a fly at such rapid speed that the line does not move and the strike can be hard to detect. Sometimes it is impossible to visually detect the line moving an eighth of an inch, but you can feel it.

I definitely feel that the lightness of this rod’s flex is robbing me from feedback.

I have found as the trout get smaller they are often lightning fast. I swear, some of these fish strike so fast, I cannot see them. I was tracking my fly on one outing in a very shallow slow moving pool and it appeared that my fly disappeared…hahahhaha. When I lifted the rod, I noticed it got sucked under a rock. A trout had come out of its cave, grabbed the fly and darted back under its rock, spat the fly and lodged it into a group of sticks under the rock. I was laughing like hell as I was reaching under the rock trying to retrieve my fly. Pretty sneaky!!! First the fly is about 4 inches from the rock slowly passing it…then a fraction of a second later it got sucked up current under the rock…hahahahhaa. Foiled!!!

I use mine rarely on small water but in my opinion the rod casts wonderfully.
The grip is fine for me, I thought different at first but one just has to hold it lightly. It is a great rod for short cast but can belt out some line if necessary.
I use mine with a #3 line.
It is a specialized stick.

As Tenbum would say, I fell for the curse. I LOVE my HM30R. Every time I use it, I get more comfortable with it and it is definitely more capable than I gave it credit for initially. I just make sure I keep the rod angle down a little so I don’t overflex the soft tip. There is more backbone in the lower half than I originally expected. For me, it does require a little more focus to during the cast so I don’t overpower it and get recoil or tip bounce…lightening my grip at the end of the forward cast tends to help for me. It didn’t come as naturally for me as with the traveler 27, but that’s considerably stiffer with a firmer tip.

The HM33R is on my list to buy in 2021. After all the favourable reports I have read I think it would be rude no too.

I’ve mentioned it before in this discussion thread, but, I had one and it was a nice rod. I unintentionally caught and landed fish which I thought were too big for it but it held its own.

I ended up selling mine about a year ago.

Most of the water i fish has heavy cover and i found that hookset required too much rod arc for the enviroments.

Other notes. Even the smallest of fish could load the rod to the point that if they won their freedom the fly would surely cast perectly into the trees and bushes. This does not happen with slighly heavier rods.

I also think the tip was so soft that i could not feel bottom contact of the fly or fish strikes. It pretty much absorbs so much subtle feedback.

I use a royal stage 30 6:4 for small brookies. It too is an exellent casting rod but beefierand provides the feedback I felt missing from the kurenai.

Most of the water i fish has heavy cover and i found that hookset required too much rod arc for the enviroments.

+1. I haven’t fished a HM33 but I have kept my shorter TT WS330, and picked up a longer DT Mutant that have similar penny and RFI numbers to use on streams that as a result of heavy winter rains and spring runoff have less brush encroachment and overhead cover where I know a rod like a Mizuchi isn’t required. On most streams on the “wet side” of the Cascade Range a native 14" Cutt is a Big Fish and 15" or larger fish are rare. Those softer rods are more pleasant to cast, don’t readily launch dinks into the brush, yet can manage virtually all of the fish I encounter, and are generally more fun to use than a stiffer rod.