This year NY updated its fishing regulations: A Catch and Release season for inland trout streams has been established. This season runs from Oct 16–Mar 31 and is limited to use of artifcial lures only. To honor this I went out to Putnam County with some egg patterns and Utah Killer Bugs. 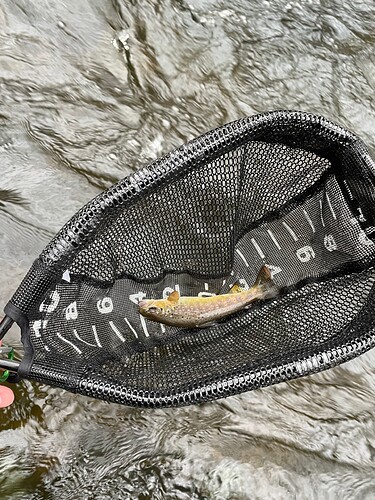 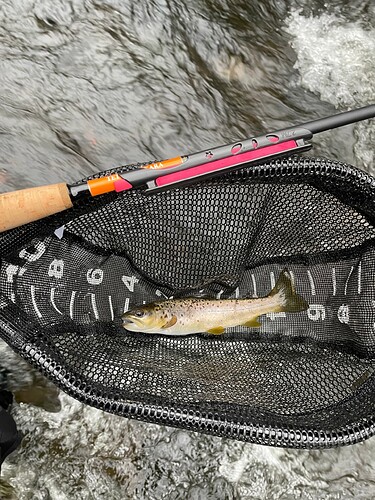 The rules in NY are very hard to decode at times, but this effort to simplify them seems like a good move. I hope it sticks (it is being pitched on a trial basis, I imagine it would take a lot to reverse it, however).

Some of the tributary rules in the finger lakes do still have closed seasons (some close Dec 31), but they are pretty short. I’m not completely sure about ponds, not that we have any with trout near me. Luckily, the great lakes tributaries are open year-round (with seasonal tackle/time of day restrictions that are seasonal)

For me, I am most encouraged by the potential opportunity to chase brook trout in skinny water – with such warm summers and low water, the seasons have been very limited under the older rules.

I also hope that the build the waterway-dependent rules into the DEC maps online so that it is a little easier to follow. Definitely steps in the right direction (hopefully fewer exceptions and more consistent rules moving forward).

Some pretty brownies @IHeartTenkara - a very admirable way to “honor” this new season.

Wish I lived closer, the only times I ever fished in New York was twice in and around Cortland. Some really pretty water.

@IHeartTenkara @Lance_Lascari Vermont has done the same thing this year. Well, it starts Saturday. The state spent a year and a half reviewing our fishing regs and found them to be too complex for the average angler to interpret. There was an extensive overhaul to simplify the regs.

I think it’s a little overdue, but am very happy they’ve finally changed things and at least gotten into the twentieth century. Maybe they’ll get into the twenty-first century in the next 75 years.

The background chatter we’ve heard is that it’s more due to a dramatic decline in fishing license sales over the past 20 years.

@Peder That is very good to hear.

I’m no expert on this but I’ve been absorbing a lot through reading and more through listening to podcasts with experts who talk about fisheries management and this seems to be a positive change.

Utopian management in my view would be to try and keep wild (capable) and certainly native/wild fisheries self-sustaining where possible with harvest only as a management tool with no stocking over wild fish.

I find that our great lakes tributaries that hold resident wild fish (and holdover stocked fish) only hold the interest of anglers when lake run fish are in or right after stocking – I think inland creeks can be the same way. So for those that want to take fish, ponds or marginal water that is heavily stocked seems like a much better option than stocking over wild fish (a pet peeve of mine is the folks sitting on buckets that harvest fish from a skinny end of a great creek around here with an exclusively wild population during most of the season). Kind of like being able to go back in time, I would love to see what would happen to these creeks if the humans disappeared for ten years or so.

I think those inland streams where catch and release should be the norm will attract mostly those that respect the resource, and with the right kind of education (identifying spawning gravel, areas, etc) I think the risks of doing harm are quite low. The fact is that it would probably be hard to put enough money into it to make all the decisions based on evidence, but you would think we could continue to do better than we have in the past.

I’m guessing that many anglers share this view, but it is not easy to change things. Perhaps the license sales are a good justification (though covid may have turned things around on that front if Vermont is like everywhere else).

@Lance_Lascari I agree, I too think it is a positive change. I’m certainly with you on your “utopian management” view. Here in VT, the locations for “put & take” angling are very well established and well known. Although, in recent years the state has been reducing the number of stocked fish, which is good in my personal opinion. The anglers who favor “put & take” blame it on budget cuts. Yet, the VT Fish & Wildlife Department has been increasing their budget in many areas. So, I suspect it’s more of a management decision than anything else.

I think your point about the impact on fish with humans disappearing holds true for all of our natural resources on the planet, let alone just New England and the Great Lakes areas.

It’s interesting, I’ve had many conversations with some guys from work that are big on the “put & take” type of angling. However, I would also argue that they respect the resources as well. In fact a conversation a couple of weeks ago, we were talking about this area in the Green Mountain National Forest that we were all familiar with. My coworkers said that they would never take the wild fish from this stream as they are too precious. If they want fish to eat (which they all appreciate), they go to the major river in the next town over where the state regularly stocks over 4000 rainbows and browns every year.

The idea of conserving our natural resources is a conversation a friend and I have quite regularly. It takes education (as you noted) but it also takes time and an investment in these outdoor places. If we don’t get people outside to hike, bird watch, fish (for food or C&R), and hunt, our natural world will be lost beyond repair. I personally think we need to work harder across political divides to see that most of us want the same end result. Whether people are liberal or conservative we all want to see our natural world protected. Yes, it is for different reasons; but I think we need to put the reasons aside and work together for the betterment of all of us. If we don’t act now and pass on the passions we have, these resources won’t be here for the next generation; let alone future ones. In the end, I think the actions to simplify regulations by both NY and VT is to the benefit of these resources and us as humans. Now if we can only put our differences aside and focus on our shared ideals, we’d get a lot further.

@Peder Yes, I think the point you make about those supporting put and take fisheries often being good stewards of the resource is well taken – I have noticed this as well. I think some locals (some of the only locals who regularly harvest fish) may not realize the impact they might be having. I suppose what I meant was more that we as C/R fly anglers often appreciate tiny fish and the fact that they’re wild, and for that reason, we would not only avoid harvesting (many), we would also have some ideas about how to impact the areas we fished the least.

But 100% – as I sometimes say in my debates about “spot burning”, I echo what I once heard “if you don’t recruit the kind of people you want to be fishing your spots, they will recruit themselves”. I think that’s similar to your point about enjoying the resources – they will either go underutilized/underappreciated or they might be mistreated – but I tend to be optimistic in the thought that we’ll recruit more stewards by sharing than by trying to keep anything like this to ourselves. There’s a parallel in the world of my other “first big hobby” amateur (ham) radio where people get upset when radio spectrum is “taken away” for other uses – but if the hobbyists and experimenters aren’t using it or furthering the public good through that resource, we shouldn’t be able to hoard it. The bottom line is that we shouldn’t take anything for granted and hope that it is always there for us to enjoy. In the interest of wildlife, I think a bunch of passionate anglers in an area are probably more proactive than we would ever expect agencies to be.

I think that much like discoveries of wild populations of brook trout in the Adirondacks (rebounding with environmental improvements like the reduction of acid rain), wild fish in some streams are not as widely acknowledged. Environmental improvements have made things possible that were written off decades ago and I am not sure that is factored in as much as it could be… people seem to be in disbelief around here when you talk about wild fish in some of the creeks.

I listen to some of the hunting-centric podcasts (I don’t hunt) – this is definitely a case where the political divide finds some common ground – and it is encouraging. In both cases you can hear the signs of people talking about a subject and being frustrated with their own political party (on both sides, some more for what they’re doing, some for what they’re not doing)… but at least it is a bit of a small land bridge that spans the huge divide there.

I completely agree with that! I used to be very secretive about my fishing spots. However, I’ve since learned that the fewer people enjoying our wild places, the fewer there are that want it protected. As long as I get the impression that someone is/will be respectful, I will happily share the locations where I’ve had success and enjoyment. I want people using our public lands, if they aren’t used, they’re abused and even worse, taken away. I’d rather hike further in to avoid other anglers and know someone else is enjoying the outdoors and is another voice to protect it, than not see anyone.

Okay, I do like going out and not seeing anyone. But, I no longer get annoyed when I do. These are not my places, these are our places.

My thinking on this topic has changed a little, but it is essentially consistent with this point.

I don’t like to share in broadcast format (open facebook group, open posts on social media, other than generalities) – but with some layer of protection (personal conversation, etc), I’m pretty open.

I think realizing that it was never really ours to begin with is important.

A friend locally told me about one small spot that is good for lake run fish … he said that the day after somebody posted on fishbrain the parking lot went from four cars to twenty – and many of them from out of state. I’m more than willing to share, but believable scenarios like this (especially in “high stakes” migratory fish seasons when people are traveling) are the downside of being too open.

I don’t like to share in broadcast format (open facebook group, open posts on social media, other than generalities) – but with some layer of protection (personal conversation, etc), I’m pretty open.

I think realizing that it was never really ours to begin with is important.