There are several interesting points made on the above website.
The statements that stood out to me are the ones that very much are the same as for tenkara fishing and traditional tenkara kebari & how they developed on similar high gradient streams:

" … The streams in the north of England have stony bottoms and fall comparatively steeply out of the hills and into lowland areas.

… The interesting thing about the North Country spiders is that they seem to have little in common with the Scottish “spider” patterns beyond the name and indeed they represent a quite separate line of development.

North country spiders are very sparsely dressed, with as little as a single turn of soft hackle and they are designed to be fished upstream, with as much of the line held out of the water as possible, hence the long rod. …

It is far more difficult to imitate a perfect insect and to afterwards impart to it a semblance of life in or on the water, than it is to produce something which is sufficiently near a resemblance of an imperfectly developed insect, struggling to attain the surface of the stream.

Trout undoubtedly take a hackled fly for the insect just rising from the pupa in a half-drowned state; and the opening and closing of the fibres of the feathers give it an appearance of vitality, which even the most dextrous fly-fisher will fail to impart to the winged imitation. … "

The rest is also interesting reading. Maybe you will enjoy reading it.

.… watch Andrew Herd tying a couple of flies which were popular in the early 1800s.

When Adam asked, “Do you know about Fujioka’san and his reference website?"
Todoroki-san responded with - 藤岡美和さん, which Google translates as Fujioka Miwa-san.

I thought there must be some miscommunication about another Fujioka’san.
But no there was not. Google just translates 藤岡美和さん incorrectly.

This was confirmed on the Fishing Cafe website, about Vol 57.
https://fishingcafe.shimano.co.jp/post_editersnote/vol57_03/

Where Fujioka Yoshikazu’s name is listed this way
藤岡美和（ふじおか よしかず）- The Hiragana provides the proper translation as Fuji o ka Yo shikazu.

To avoid confusion the blogger wrote his name as 藤岡よしかず氏…

Keiichi-san just mailed Fishing Cafe Vol 57 to me. I look forward to receiving it.
Check out the other 4 previews of the issue on the above website.

For years I fished ‘North Country style’ in the streams of Lancashire and North Wales in the UK. My weapon of choice was a 10’ 6” rod with occasionally three flies, but mostly two. I always had a sparsely tied Snipe & Purple on the point and either a Waterhen Bloa or, a Partridge & Orange on the dropper. If there was any ‘colour’ in the water I would fish a hackled Coachman (wet version) on the dropper. The Snipe & Purple may occasionally get substituted with a Williams Favourite.

Because I was fishing a long rod, one tended to fish a relatively short line and do a roll cast each time upstream, raising the rod, as the team of 2/3 flies came back towards you. It was a very efficient method. The length of line fished never varied. I would gently wade upstream as I went. It was the norm to ‘fish the water’ although if I saw a fish move within range I would place the flies over the fish.

It was very successful and most unusual for me not to catch.

PS - all fish were returned.

It is a wonderful Stillwater pattern

Very valid pattern even with the tenkara fishing

Todoroki,
I have fished wet flies since the early 80’s with great results in fly fishing. I have used traditional
wet flies from England, Ireland, Scotland, as well as Flymphs, and soft hackle flies (Sly Nemes design).
All of them work extremely well on trout streams in Virginia. I now use these same flies for tenkara fishing
with equally good results. The Clyde Style and North Country Style are brilliantly designed flies so you should do well with the flies.

Further to my earlier post on the ‘North Country style’, quite often when the situation presented itself, I liked to fish my team of 2 or 3 spiders across and downstream too.

I suppose it is not strictly ‘North Country style’ but it is very effective. Remember I always fished with a long rod (10’ 6”) using a short line, so it was possible to hold a fair amount of line off the water to allow the flies to drift across and down without too much drag. At least once in the process I would manipulate the rod so the flies stopped drifting downstream and start to rise in the water just below the surface. This induced a take if any fish were in the area. However simply leaving the flies, until they had completed their drift and and were right into your bank, they would automatically rise and attract any fish. A word of caution here about actually hooking those fish! If you just struck in the normal way you would miss more fish than you hooked because you pulled the hook away from the fish. When I felt the fish hit the fly I PAUSED slightly and then tightened GENTLY into the fish. My catch rate was much better.

David,
I’m glad that someone else loves these flies as much as I do. Their beauty is in their simplicity. These
flies (spiders, soft hackle,flymphs,etc. ) are so elegant, this is why I enjoy the Kebari flies so much. Merry Christmas and Happy New Year to you all. 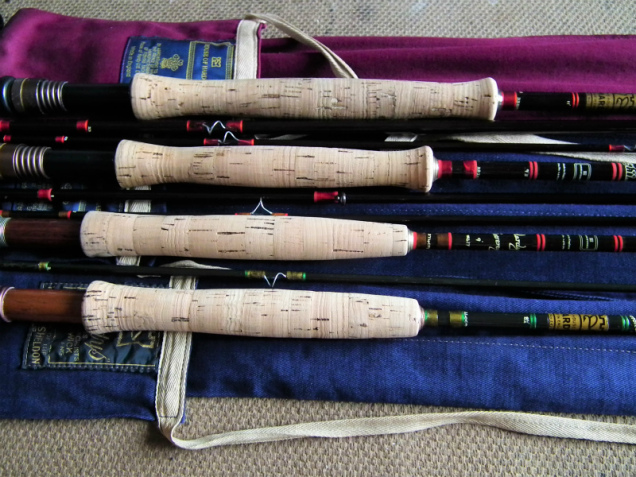 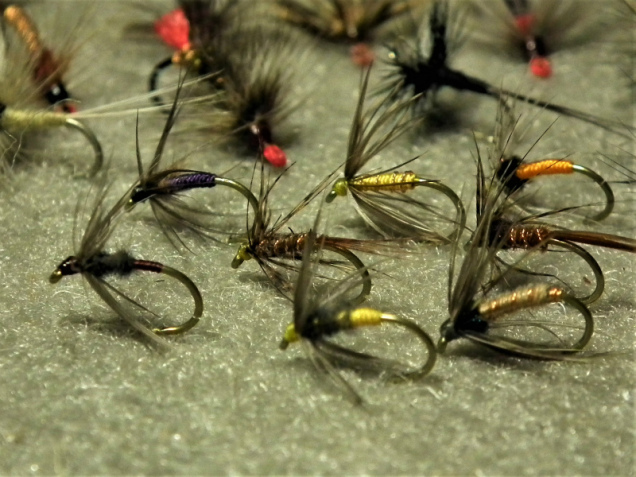 My interpretation of the more ancient times 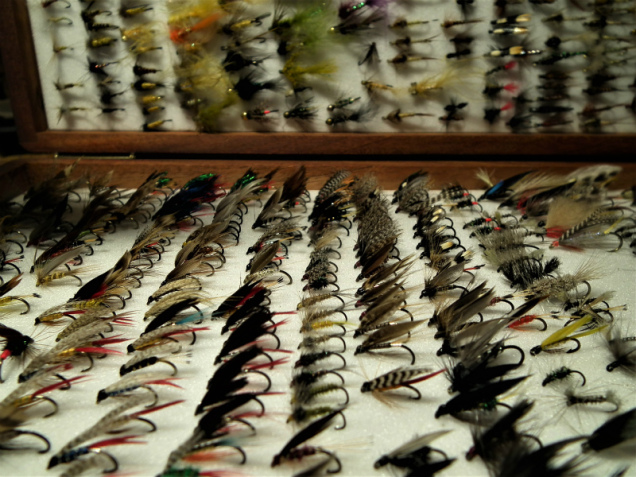 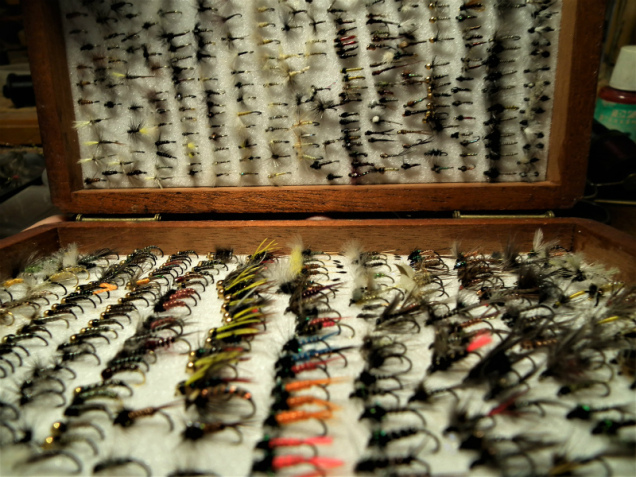 I enjoy the Kebari and flies

We do not often hear of people fishing with flies (or kebari) using keiryu rods in in Japan. Is it common but not written about because it is not traditional, or is it uncommon?

Originally kebari was used in a mountain stream rod

The current Tenkara rods were generally sold in the 1970s

After that, light rod and light lines were released so today’s style has become generalized

That tenkara-rod and light line were rare in the 19760s 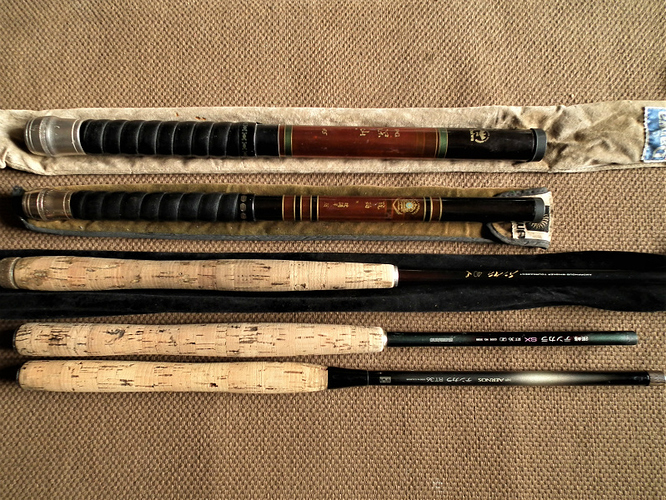 For rods exceeding 5 m, both hands were “double hands”

In Japan, only a few mountain people did a mountain stream fishing the Before 1950s
(especially iwana fishing)

iwana is treated as cash coupons with the villagers

I’ve seen several Japanese tenkara blogs where they would buy a keiryu rod off an auction website & modify them into a tenkara rod that satisfied them. Often this took the form of buying maybe a 5m or longer rod, discarding one or 2 segments above the gripe, so that it was a shorter rod. More often than not making a headwaters rod of about 3.2m. Balance the rod by cord wrapping the gripe section before applying a gripe over wrap . A couple of the more active sites have gone dormant over the last year or so. More often I’d see people modify hae rods ( ハエ竿 ) for tenkara.

Here is a site where he modifies a hae rod.
テンカラ竿の自作方法 Method to make your own tenkara pole.
http://kamihusa.biz/category/dougu/jisaku

Note: jisaku, in the above URL = 自作 = self made or home brew.

Here is an old site where they modified a keiryu rod for tenkara. Not sure if I recall seeing this one before or not.

Again note jisaku at the end of the URL, tenkara sao (pole) jisaku.
But here he started with a 3.6m keiryu rod.

3.6mの渓流竿で硬すぎず柔らかすぎないモノ、中硬くらいが適当か。
Is a 3.6 m mountain stream pole, too hard not too soft, medium hard is suitable?

For anybody interested in North Country spider flies, especially if you tie your own, then I can recommend the book ‘The North Country Fly’ by Robert L Smith.

a very well known angling book seller and publisher in the UK.

You will learn everything you need to know, as well as get some excellent dressings for all the flies.

I purchased a used book from them (via Amazon) just before the holidays and it arrived very quickly. Great selection of books. Some of their out-of- print books can get quite expensive.

Love these flies, which I use interchangeably with more Japanese-style flies. Don’t really see much difference in terms of strikes and hookups in my waters.

I’ve spent my nights this winter tying up a bunch of partridge & orange and peacock & partridge, sometimes with a red-black Hends krystal flash rib over the peacock herl, mostly in size 16. Fun times, as long as my eyes hold up. 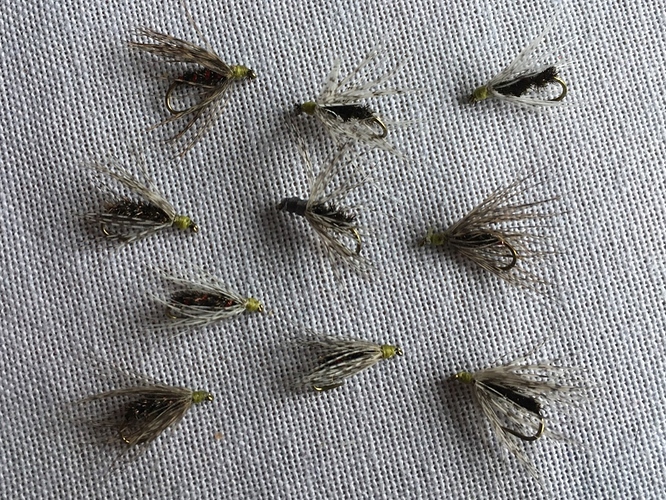 I still need to tie my snipe & purples for next year, but everyone seems to be out of snipe feathers and snipe wings at the moment.

Try Jackdaw scalp or Starling hackles. I doubt whether any self respecting trout is going to take a look and refuse because you haven’t used the correct hackle! I think it more important to ensure that any hackle is tied SPARINGLY and you have the slim purple body. I tend to strip off the side of the hackle that is tied on the ‘winding’ side to help minimise the hackle on the fly. I sometimes go further and remove a few fibres with tweezers so it barely has hackles at all!
If you think about it a well used Fly is often almost bare yet still catches.

May I suggest this UK company - Cookshill Fly Tying - https://www.cookshill-flytying.co.uk

They are highly regarded and I doubt if you will buy better quality elsewhere. They attend one or two fly fishing fairs in UK so I tend to buy from them then.

I agree with @davidsr. In fact, starling is one of my favorite feathers to both tie and fish with and are generally inexpensive and easy to find. It is one type of feather that I always keep at hand.

I just recently purchased some Cookshill products and they are excellent.

How to use wing different from North Country Style 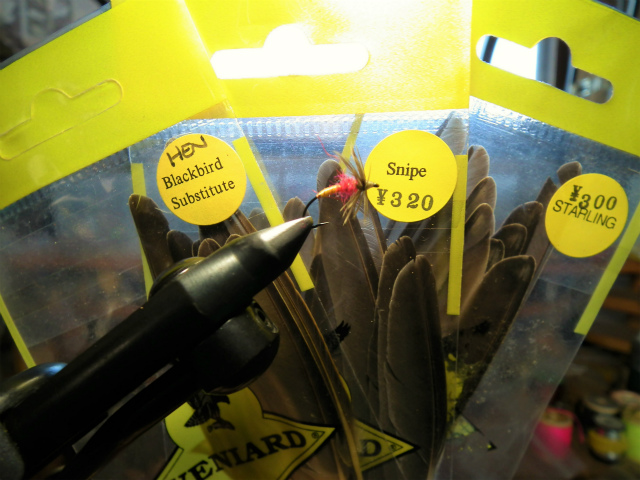 It is the same as using kenbane in kebari 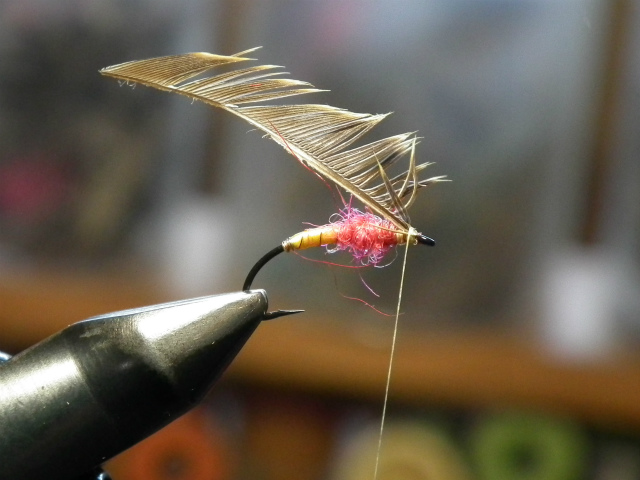 One side not used in the wing of dry fly 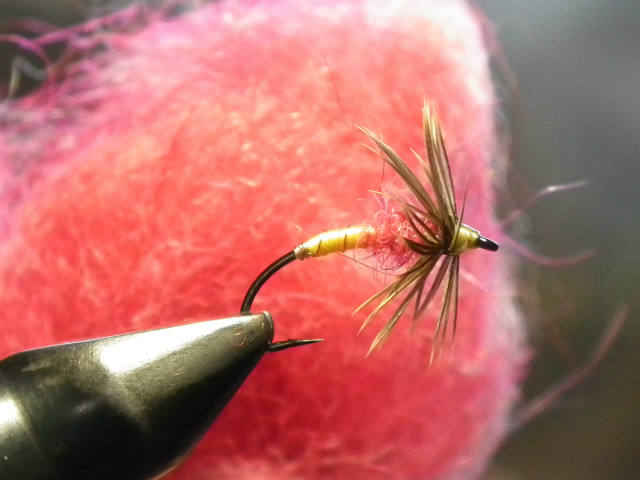 Although formally know as amber
but
Pink has the effect (山女魚）

I agree with @Peder concerning starling. I use the hackles a lot.

I have just taken some photos of the hackles I use. 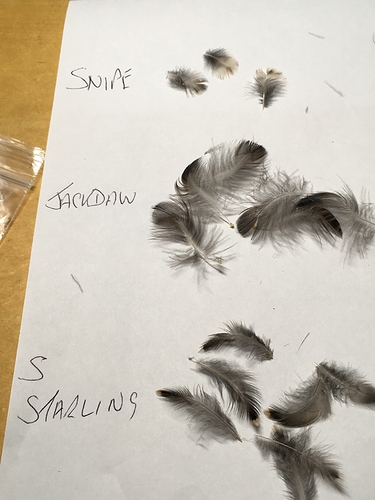 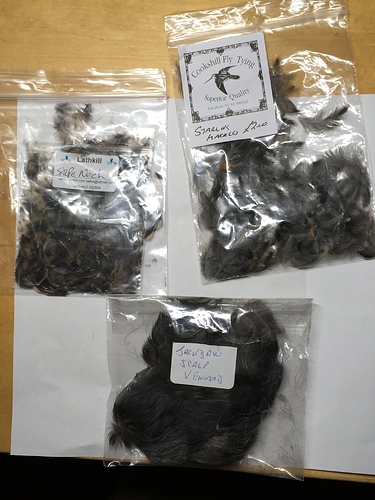 I, too, just received a copy of Robert Smith’s book and have been very impressed. In a sense, this is full circle for me because it was a photo of a North Country style fly that eventually led to my discovery of tenkara (by way of loop rods and then horsehair lines).

The similarity between a long “loop” rod with horsehair line tied to the rod tip and a tenkara rod made me think that tenkara would be the easiest way to fish the North Country spiders the way they were originally fished. Before long, though, I was captivated by tenkara itself and had set the North Country flies aside.

Smith’s book has an extensive bibliography of early books. I plan to go through them to learn what I can about traditional European fly fishing with an eye more to methods than to flies - which would just duplicate his efforts. With all the recent discord in the tenkara community over the “real” tenkara anglers and when one can and cannot even use the term “tenkara” I think looking into traditional European fly fishing may present some welcome relief. Other than our friends in the Sesia River valley in Italy, no one is doing it now, so there is no one to loudly complain that we’re doing it wrong or that we’re using the wrong terminology.