The full title is 現代テンカラ―だれでも振れる釣れるアマゴ・ヤマメ (Modern Tenkara - anyone can swing catch Amago-Yamame). Sorry, but I don’t know what English word would be a better translation for 振れ (fure). Swing or Shake seem to be the only choices.

Many of you may already have the book or heard of it. Even though it is written in Japanese, it’s still a fun book to own. Currently 9 of them are listed on Amazon for about $14.

The Modern Tenkara videos:
For maybe three years I had aware that this 60 minute video existed. Last summer I finally found a source where the video could be ordered. Cool stuff if you like seeing 27 year old tenkara videos. In Japan it’s a bargain, 400 yen. < $4. I had Keiichi-san at TenkaraYa order it for me. By the time he added $9 s/h charges within Japan and $14 s/h to me it cost me just under $28. Probably a little less now because today $1 buys you more Yen than it did a few months ago. You can see my order in the custom order section on TenkaraYa.

Video Modern Tenkara part 2 ビデオ 現代テンカラ パ-ト2
I was also aware that a second video existed Modern Tenkara part 2, but I could not find out much about it. I was only aware that it had been made. That changed this evening. I found out that it was made four years later in 1994. And it’s listed on Amazon JP. But it’s higher priced at 1935 yen, 3.8x the price of the first video.

Now here is the cool part. I was expecting the video Modern Tenkara 2 to cost about $35 + a little bit because credit cards never provide the best exchange rate. 50 minutes after I asked Keiichi-san to order it for me my order was completed. You can’t beat that. Sure maybe I could save a few bucks if I set up an account with AmazonJP. But I don’t mind paying a few bucks extra to encourage Keiichi-san to continue being available to assist with the purchase of other items from Japan that may be more difficult or impossible to order myself.

The rest of the story.

The book is available on Amazon.US

The first Modern Tenkara video, is listed on Pulsebit. 10th video up from the bottom. #V306. 400 Yen. If you would want to order it via TenkaraYa. It might be helpful to supply one or both of these links to avoid any confusion:

For those not familiar with Fuji Hiromichi, 冨士弘道. Christophe Laurent has 2 good posts about the book and him on his blog:

Hope this was of interest to the Tenkara old hands here, and newbies too that we hope find their way here. I’m kind of excited to have located a source for the Modern Tenkara part 2 video.

As always, great find David. I’m excited to hear how this video is as the other one was great for understanding some new things.

Well doggies, doing a google search with the isbn number for the part 2 video, 現代テンカラパート2 I discovered there are two of them on AmazonUS. I recognize the supplier, Samurai_media, I’ve order Keiryu magazines or Mooks from them before & they delivered good products. However, the price is $5 more than ordering from Keiichi-san.

A Great & wonderful Tenkara-master 富士弘道
Very easy to understand tenkara
Ｔhis is a great introduction
I will advance the lightweight taper line (fuji-line ) from the level line
Best line length is 3.6 m ～ 4.5 m & Rod length 3.6m ~ 4.0m
It is easy to use Mountains stream
but 十人十色！

Speaking of Fuji Taper Lines. On U-Nissin home page, dated 16 January is a new line:
冨士流テンカラPⅣライン Fuji Style Tenkara PIV Line.
I could not determine what the PIV stands for. Maybe Pink 4.

Only that the line is 4 to1 taper, 100% Fluorocarbon line, that promotes soft splash down & sharp kebari jump / hop.

Also on same date was announced for release in February - Fuji Style barb-less kebari. But there was no link to a product page.

I forgot about that video David. I think you had shared that over on T-F at one point in time too.

I watched this video for the first time

楽しいビデオですね。
It is a fun video. 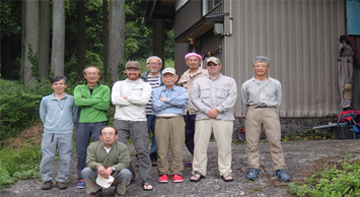 After playing musical chairs to find out which post office had the 現代テンカラ パート2 Modern Tenkara Part 2 video. The delivery has to be signed for. I finally retrieved it yesterday. It might be my 2nd favorite WSF, Weekly Sunday Fishing video. Only second to Dr. Ishigaki’s Introduction to Tenkara video. I like this one a little more than the first one.

That being said, I am upset with myself. After 23 years this video was in pristine condition. It looked brand new. I watched it through twice from beginning to end. During the 3d viewing I screwed up. I rewound it several seconds to see if I could figure out some of the Japanese subtext. I should have hit rewind, stop, play, instead of rewind, play. The vcr decided to eat the tape. I feared it would get broken trying to release it. I got it out, but now there is a 5 second segment that has lines running through the image. Very unhappy with myself letting this happen. Leave it to me to take something that survived in perfect condition for 23 years and inside of 2.3 hours I damage it.

Anyway, during most of the video he is giving on stream instruction to a young woman and a young man. There are numerous “check points” and “case studies” examples of different fishing methods. Diagrams of rod and line used. A mysterious, パーフェクトライン, perfect line. Maybe a trade name or brand name of a line made 23 years ago.

Half way through he ties one kebari, using an interesting technique for making a sakasa kebari using duck feather barbs. Which I have always found to long to use. And I have free access to lots of duck feathers. Until recently we had a dozen or so ducks that stayed in the creek in front of my house or laid eggs in the flower garden in the spring. Now down to about 5. I think raccoons, coyotes or foxes are wiping them out.

Anyway, he starts winding on a white or off white thread onto a TMC 102Y １３号 hook. Then over wraps that with red thread back about 5mm, over wraps the trailing end with the white thread, then cuts off the red thread. From there he builds up the thickness of the white thread portion behind the red head at the eye of the hook. Then he holds scissors next to the hook that are opened mid way, only a little or opened fully. My guess is his instructions are about how the thickness of the thread winding will control how open the hackle is after it is wrapped down tight.

From there he cuts off a pinch of feather barbs, wraps them with thread about 3x, mostly pushing the feather barbs to the front side of the hook. Then takes a second pinch of feather barbs and ties them on mostly on the near side of the hook. The barbs of course pulled back toward the bend of the hook such that the hackle has the correct length for the size of the hook. Cuts off the excess length and finishes the body with a few wraps of peacock herl behind the hackle, again using a method I don’t remember seeing before. Then finishes the thread wraps, ties off the thread with the same method he used in the first video.

He covers sutebari 捨て針釣り, and sasoi 誘い釣り, demonstrated a little differently than in the first video. And after showing a diagram of casting distance with a 3.6m rod with 3.6m line. There are a series of instructions wherein he stands in what I would call a martial arts t-stance. And either leans forward or backwards with weight on his rear leg as he makes several cast, I assume to illustrate that is the best way to control the point where the fly splashes down. I would say his casting stroke looks different from what I have seen in more recent videos, but whose casting stroke wouldn’t change over 23 years? A fun video to watch. he must have been about 55 y.o. when it was made, and about 78 y.o. now. Worth the price. I’m just disappointed I managed to damage the tape. 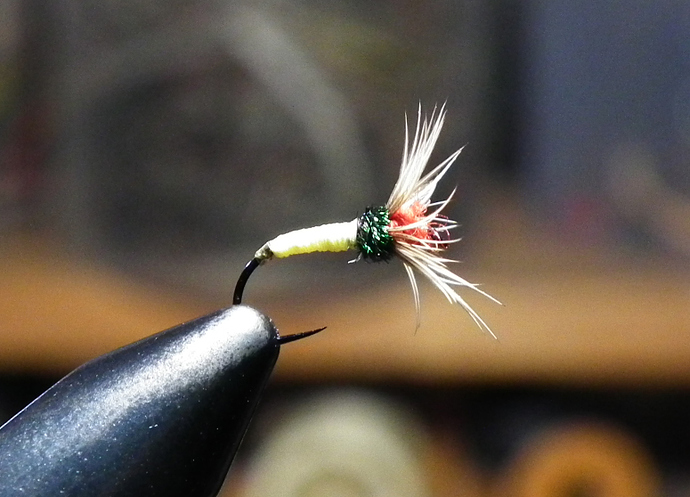 I think that this tying method

That’s certainly a bummer David, sorry to hear that. Despite that thanks for sharing so much detail from the video.

David, sorry to hear that.

Well, you know. It’s not the end of the world. 98% of the tape still plays perfectly. But it is like letting some nutjob with a Sharpie into the art museum, and when all seemed normal he suddenly slashed four broad strokes across the van Gogh.

His completed kebari looked a lot like that one.

But, he used a different tying method, and it was a different color feather.
He cut barbs from the feather that looked like this one: 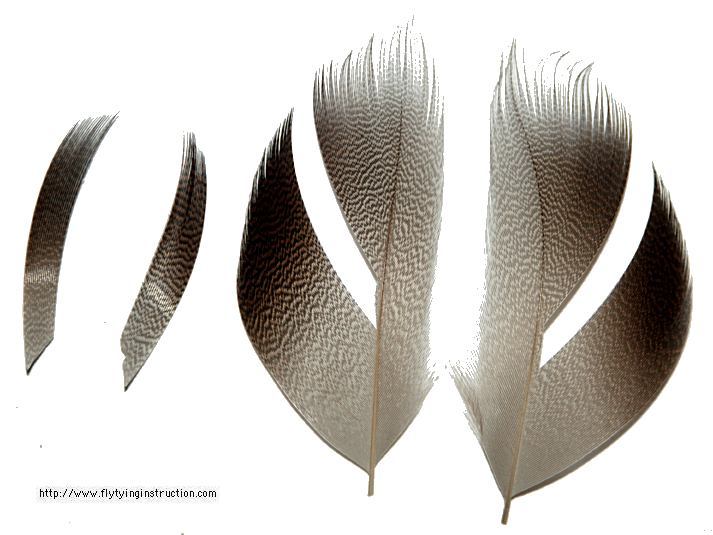 And tied in the two pinches of barbs like the two on the left.
Use only 左側・2羽毛

Of course the 13 page document is written in Japanese, and a bit difficult to translate, and a little dated being written in 2007. But still even without knowing much Japanese it is a fun document to look through.

Except for the Gamakatsu website this is the only place where I have seen anything written online about rod moment. (page 2) [but Eddie Yamakawa is the first person I recall to write about rod moment on the TUSA forum]. He doesn’t make any recommendations about Moment values, only stating that generally rod Moment (torque) will be proportional to rod length, but there are exceptions.

Worth a look in my opinion for those reasons alone. Unfortunately lately I have started noticing broken links on the orange.zero…tenkarakai website. Therefore is you like this pdf document you might want to save it just in case the link to it also becomes broken in the future.

Therefore is you like this pdf document you might want to save it just in case the link to it also becomes broken in the future.

Thank you dwalker
I saved pdf

I took the knife to my first attempts at tying a kebari using duck feathers for the hackle, applying them to the kebari using the same method Fuji-san demonstrated in Modern Tenkara part 2 video. I think I am finally getting the hang of the method. After learning to keep the barbs aligned so that both pinches of feather barbs extend the evenly. The other tricks are : don’t wrap on a base layer of thread beyond the steeply tapered head, and don’t trim the waster off in the middle of the hook shank. Leave it long enough to reach the bend of the hook to help fill in the body thickness. 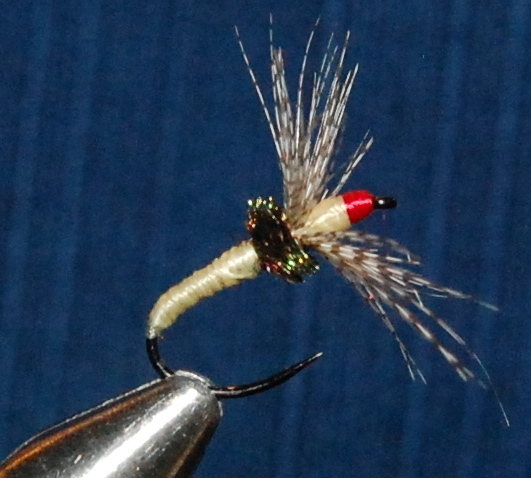 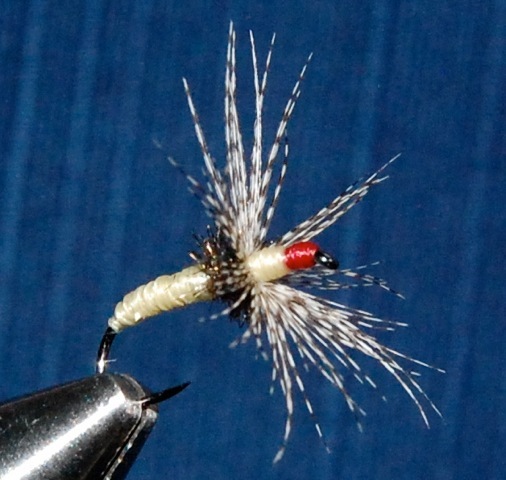 AWESOME, is all I can say.