This season I have migrated mostly to level lines.
Specifically some nylons that someone was nice enough to send a guy.

I like both flouro but the nylons are more visible.

I have been using a leader stretcher to straighten out my line. I have seen footage of Go Ishi stretching line by fixing it to a tree or post. Sometimes this is not feasible and think the friction of this rubber pad might reduce actual stretching by using heat to iron out the memory. 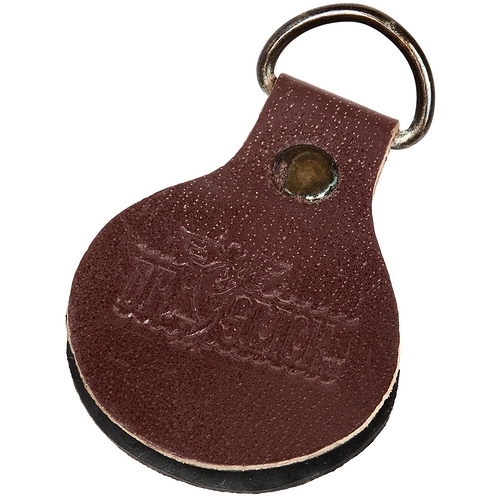 It does a decent job but is not perfect.
I do like the lightness of these level lines, but the arc and waves that always remain reduce some feedback I used to have with furled leaders. Most often furled are always straight. No memory at all. The benefit less pull transmits to the rod tip immediately…where all those waves in level line need to be straightened before any feedback reaches the rod.

Has anyone found a better way of removing memory?

yes I know sight is a good way to track strikes…but the way I fish I find often I cannot see the fly, the tippet, or the end of the level line due to glare, shadow, or visual obstruction.

Fishing mainly flurocarbon level lines around #3 I find that if they’re wound onto the spool nicely when stored, e.g. a few turns, flip it round and then a few more turns, then when it comes to fishing I usually pull 80% of my armspan off the spool, tension it and then pull another 80% off and tension it and so on and so on until I’m down to the tippet.

This usually leaves me with a quite remarkably straight level line from the get-go.

Same approach for me…I stretch the line as I unwind it when I first get to the water.

Interesting. I have not run into that yet. Perhaps the composition of the leader material is different. Tapered leader I assume.

Yes, tapered fluorocarbon. Just seeing that happen was enough for me to not try it on my level lines. I just stretch them like everyone else.

I do pretty much the same as others have mentioned here. When possible, I’ll attach it to a tree or something else and give it a gentle tug and hold it stretched for a few seconds. That’s my preferred method and usually works well.

The only thing I’ve noticed is that as my level line gets older (or more abused) it starts getting a little stretched out. At that point, I’ll just cut a new line and start over.

If I don’t have room to stretch it like I mentioned, I do it exactly the way @duncanp described.

I will have to test some stuff here at home…but it seems like the best i can get is a wavy line.

If you consider at best a simple sine wave over a whole length where the peaks are an inch or two then a trout needs to remove that slack even before any vibration can be felt on the rod. So many folks speak of rod sensitivity but i feel a lot of it is moot fishing a level line.

Furled is heavier and may affect drift but is straighter with perhaps a bit more response to a strike.

What got me thinking about all this is that i missed a couple of violent strikes on my last outing that i did not feel at all but saw the tail end of. Both were quick takes and drops. There was no way i could respond.

Then i dialed my memory back to my last outing with a furled leader and actually felt and set the hook on 3" brookies.

I know level line is the goto for most. I guess i am trying to see if i am missing something.

Before the leader straightener i used the stretch by hand method. It seemed to take longer compared to using the leader tool. The tool also seems to give better results. I still have quite a bit of waviness. I cannot help but think is the best its gonna get.

Just out of curiosity, is there any chance you may be winding your line too tightly on your spools or other type of line winder? Maybe not, I don’t know.

I only ask because I’ve never had problems similar to what you describe with either fluorocarbon or nylon.

Could be…not sure. I do not think i am putting extra tension on it.

It would not be thevfirst time i missed something a simple as that.

I partially asked because I did that the first year or year and half (I know you’ve been doing tenkara longer than that now) when I first started tenkara.

I was using the smallest blue Meiho spools with the yellow foam and the foam kept getting these grooves or creases in it from the line. Then later, I learned about stretching the line and noticed that it took a lot more work to stretch the line and get the memory out when I wound my line tightly.

Anyhow, you may not be doing it at all. It was just an idea.

I … think the friction of this rubber pad might reduce actual stretching by using heat to iron out the memory…Has anyone found a better way of removing memory?

It often seems to me that a little heat from friction helps remove the coil memory from FCLL. Maybe it does or doesn’t, and I’ve just convinced myself that it does.

I usually stretch and arm’s span length till I’ve stretched the whole line. Repeat it a couple of times, then finish by pulling the line through my pinched fingers to add a little heat into the line. Pulling not to fast as it it gets quite warm. Don’t be shy about stretching pretty hard.

However, my question is - what brand of LL are you using?
You might have less problem with coil memory using a different brand of tenkara LL.

But having asked. Most of the brands sold today as tenkara LL don’t seem to have as much coil memory as the tenkara LL available 8 years ago when I first started tenkara fishing. [ or maybe I’ve just gotten better at removing the coil memory by the way I stretch the line] And usually any that is left is gone after landing a fish or two.

When I use a level line I use the Yamatoyo Brand which I find has a low memory and easily stretches out. It is also in 50metre spools and is in hi-
Viz yellow. I have tried various other brands and colours but find this the best.
https://www.tungsten-beads-plus.com/collections/tanago-tenkara/products/yamatoyo-hi-vis-tenkara-fluorocarbon-level-line

I use this same line

I used that same line for the first three years that I fished tenkara. Both last year and the year prior, I purchased several other brands. While I still have about 15m of the Yamatoyo remaining, I don’t use it very often. I find it very stiff compared to other brands, which may well relate to the fact that it does not have a lot of coil memory and stretches out easily.

In my experience thus far, I think that softer lines do have more memory, but the other benefits out weigh that inconvenience for me. Although, this is only my anecdotal experience and nothing scientific.

I’ve had good results with the Sunline Buttobi and the Yamatoyo yellow. I have TUSA line in the “heavy” 4.5 that stays nice and straight once it’s been stretched.

I have a number of brands. Yamatoyo, Nissin, etc…

Tonight. I will see if I can get more detailed in my notes. What I consider straight might be different than someone else finds acceptable.

On reflection, I can see how Go Ishi’s method of stretching the whole line evenly may make a consistently more even line. If one were to over stretch one region of a line more than another, It could make it more difficult to compensate for that thin spot. Variation in thickness can impose a curl or arc.

Perhaps the leader tool is causing this for me. Not sure. I will have to goof around with some fresh lines.

I can see how Go Ishi’s method of stretching the whole line evenly may make a consistently more even line. If one were to over stretch one region of a line more than another, It could make it more difficult to compensate for that thin spot

I don’t have anything specific to back it up (besides personal experience), but I think I would agree with it. After seeing Go Ishi and Kura-san do that in the DT video, that’s how I’ve been doing it and feel it works very well; better than doing short sections at a time.

So I tested a bunch of stuff. Seems like the nylon (which is what I have been using lately) really holds onto deformation. No matter how much it is stretched or the method. Still enough wave to be a poor transmitter.

The flouro level line is better, but still has some waves that cannot be fully removed.

this is an illustration of roughly what i am talking about: 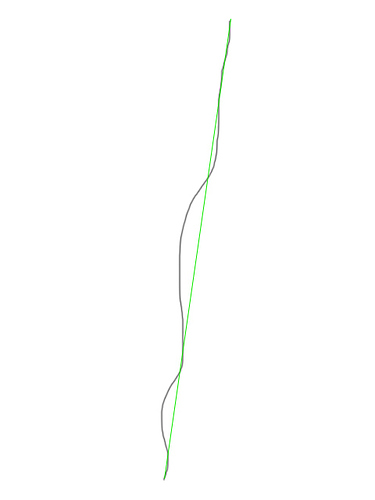 the green line is straight for reference… the dark line represents the 10 feet of level line. It has some waves wobbles and slight twists.

I suspect some of the problem is not employing an even stretch from the beginning and storing it looser in a larger arc.

Its not that one cannot fish this way. I caught plenty of fish the other day… but I did not feel the takes and had to rely on sight, manipulation, anticipation, etc. With a furled leader I felt more strikes because it was straight and probably pulling slightly at even the tippet. A slight draw to me…although ruining my perfect drift, maintained the slightest of tension.

From years and years of angling, my senses are peaked for a strike transmitted to the rod. 90% of my striped bass fishing is at night. Everything is feel and nothing is visual. What I am noticing here, is that although Level line is getting me a better drift it is robbing me of the feel of immediate strike. The slack shown in that green line has to be overcome before I can feel anything.

Would you guys consider the drawing roughly accurate of how your lines look?

My recent obsevations have gotten me tinkering.

I hit the river yesterday morning and I changed lines.

I actually got motivated to try something different. I grabbed one of my salwater braids and fished that.

It fished incredibly well, and definitely more sensitive. The only downside is that it is 25% thicker than the equivalent flouro level line. I have not weighed the difference not have the capability but cannot help but think that it has to be of equivalent weight considering there is a lot of air in these braided lines. This line is made of dyneema.

All this line business I feel is a bit of a scam. I have so many tenkara specific furled lines and flourocarbon level lines that it is laughable. at about $20 a pop, I probably have more invested in lines than in rods…hahahahahha. For me to go into my stockpile and just pull any fishing line out at random and have it fish as well, if not better than the other expensive lines is pretty funny…and really has me thinking.

That invisibraid is white. It was visible for me in both low light and full. The other thing that is nice is that it is straight as a arrow and I was back in action, feeling every tick of structure and grab of the fish.

I may need to try a lighter line closer to the #3 thickness.