It is a very insufficient explanation

It is a rare existence at that time

They worked as a tradition of mountain culture

It is a culture that never tells people in the city

The countryside also absorbed the culture of the city

Japan’s literacy rate in the 1860’s is 99%
There is no time to write a book in rural areas of the countryside, life is busy thing
Because everything had to be created with our own hands

In every country the urban and rural culture structures are complex

Thank you for helping us understand your culture and the history behind tenkara and kebari. This is very fascinating.

Do you understand the connection between Tengara and Tenkara? テンガラとテンカラ?
Or is there no actual relationship ? Only similar sounding names?

Tengara seems to use to a 掛毛鉤 ( kake kebari ).
Which seems to not be a fishing fly. But is instead a treble hook with a tall conical weight in the middle.
掛毛鉤 translates as - Hanging kebari, but maybe that is an inaccurate translation.

I only know that - Kake ( 掛 ) appears to be part of the phrase, shikake, 仕掛け.
As in tenkara shikake. テンカラ仕掛け.
Meaning more or less the same as tenkara tackle. テンカラタックル .

Also is a Kaga Tenkara pole, [ 加賀テンカラ竿 ] an old type of tenkara pole?
A specific design?
Or just a tenkara pole made in the Kaga area?
Which, is also called Kanazawa area.

[ I find the Kanazawa name interesting. I live 30 miles from the Kanawha Valley, Similar sounding names. I have read that - the word Kanawha - was a Shanee Indian or Algonquian word that means - beautiful valley. But I do not know if that is true.]

What is 從毛鉤? [ 從毛鉤って何ですか？]
It translates as either Obey kebari or Follower kebari.

Google does not know the 從 kanji .
Wikipedia says that 從 is related to the 从 kanji.
Again 从 is not recognized by google translation. It seems to mean 2 people. 二人.
Leading me to think. A kake kebari ( 掛毛鉤 ) is 1 of 2 kebari. A pair of kebari used together.
And is the dropper kebari in a 2 kebari fishing rig. ２毛鉤 仕掛け / ２毛鉤 タックル。

As in this nymphing set up.
http://stevenojai.tripod.com/nymph.htm
テンカラ伝承はありません。There is no tenkara tradition, I think.

Do you understand the connection between Tengara and Tenkara? テンガラとテンカラ?

tengara & tenkara is the name of the region 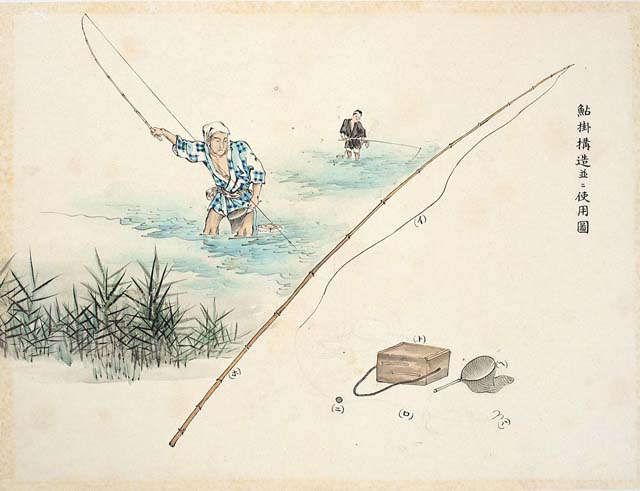 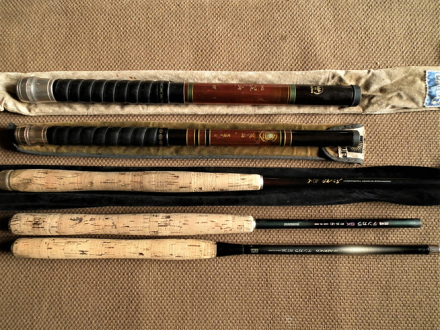 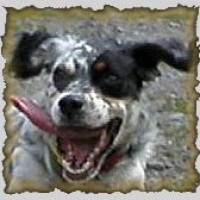 Fishing tool in the Akita area

Also is a Kaga Tenkara pole, [ 加賀テンカラ竿 ] an old type of tenkara pole?

「加賀テンカラ」と名付けた・・・Meaning " nick-name of this product."
Luxurious rod based on traditional ayu rod

This is Chinese 從 & 从

テンカラ伝承はありません。There is no tenkara tradition, I think.

My blog introduces ambiguous or unspecified details in fishing magazines

This explanation is the same amount of story as one book 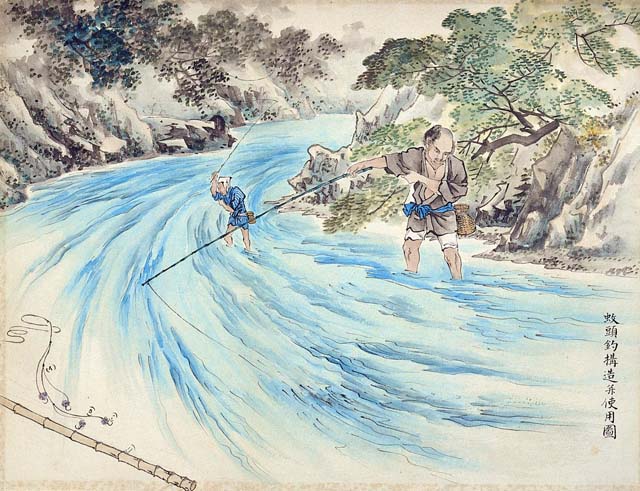 Thank you. Lots of interesting information.
A lot of information in the two blog post too.
But difficult to completely understand because the whole page digital translation into English is not very good.
Line by line translation is better, but tedious to do. And some kanji just do not have an equivalent English translation.
Wonderful art too. I do not recall seeing them before.

I completely agree with you. It’s really amazing info. I too found it interesting that translating one or two lines at a time made more sense than the whole page.