Karin Miller On What Is Tenkara?

Had to Respond. Why the Need? - Zen Tenkara**

Any idea where the original article is?

It was an article I wrote for Tenkara Angler.

Tenkara is misunderstood. In the larger scope of fly fishing it has an image problem that hasn't improved much. Here's some ammo to flip the script.

I really do not understand the disconnect on why this topic has to perpetuate.
Michael has so simply explained it all in the article. We have hashed through it so many times.

Karin Miller is a fantastic fixed line fisherperson, but largely what I have seen of her material, none of it is tenkara. Calling it tenkara is just ignorance and being stubborn.

It is the equivalent of putting on a pair of down hill skis, using them for cross country skiing but calling it downhill skiing. Wrong application, wrong technique.

Much of what Karin is doing is more of a challenge and a handicap. Using a tool for what it is most optimized for is at the core of the difference too. Like tenkara and it’s techniques are optimized for targeting trout in high gradient streams. I would not consider another method for the task. Where targeting larger fish in large rivers, like chum salmon. A spinning or flyrod is better suited. A fixed line rod is just a challenge but a horrible idea in terms of efficiency on the water as it has low probability of landing the fish without toasting it. The fish has the leverage advantage with a long rod.

It does look like fun, but the advantages of fixed line over other methods here are near zero. 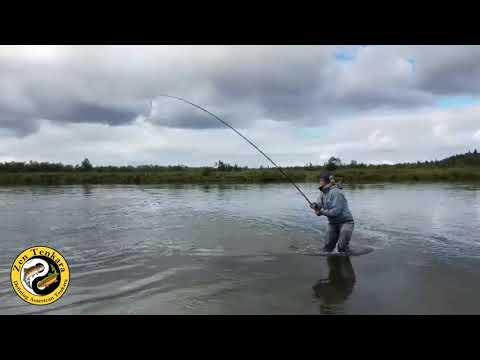 All this said I have fished for salmon with a tenkara rod and for striped bass with a fixed line carp rod. It is fun, and I encourage everyone one to try it. It is a challenge and requires a lot of strength to land big powerful fish on a long rod. Just simple call it what it is, fixed line fishing…hahahahahaha.

I agree with @Gressak. I like to fish for Sea Run Coastal Cutthroat Trout (SRC), “Jack” (juvenile) Chinook (aka Blackmouth) Salmon, and Chum Salmon from local beaches in the Puget Sound using arthropod, cephalopod, and baitfish patterns. There are also “Resident” Coho Salmon (aka “Rezzies)” that choose not to migrate up to Alaskan waters and stay in the “Sound”. I use a Scott 9.5’ 6 weight rod and integrated 35’ intermediate shooting head / floating running line for SRC, Jacks, and “Rezzies”, and a 9.5’ 8 weight for Chums. While SRC hookups can come 20’-30’ out in knee deep water, most all of my SRC hookups occur when retrieving flies swinging in a ~3 knot tidal current at about 35’ to 45’ after blind casting 50’ - 70’, typically shooting 20’-35’ of line. My Chum and Jack hookups usually occur further out near the end of the (usually blind) cast.

With my Scott 9.5’ - 6 wt Trout - Jack - Coho beach rig along for comparison, I tried fishing for Searun Coastal Cutthroat Trout with a 5.3m Keiryu rod and a Fujino 10m tapered line; both rigged with the same fly. I tried the Keiryu rod first. Even though I had done well lawn casting to a 10" pie tin target at a local park with the tapered and 8m #4 fluoro lines, the (typical) westerly onshore wind was causing many of my casts to pile up short. The fish aren’t holding in lies but cruising and hunting prey so with being unable to shoot or strip-retrieve line during and after the swing I felt like I was fishing with “1 hand tied behind my back”; unable to either reach out, effectively cover the closer water or get solid hookups in the intervening distance after the cast. On top of that I did not have a lot of confidence in the 6X max tippet rating for my rod should a hooked fish decide to “dog” me near the barnacled cobble bottom; typical of SRC salt habitat.

After casting my Keiryu rod for about 30 (often frustrating) minutes 35’ into some fishy looking nearshore boulders I retrieved the rigged western rod and standing in the same spot hooked and landed a SRC on my first cast. A western fly rod is more efficient & effective. Similarly, a spinning rod & reel (or fly rod and spinning reel) with a lure or teardrop casting float and fly is usually more efficient and effective for me in lakes than (either a fixed line or) a western fly rod & reel in a float tube-Watermaster raft-boat and especially from shore.

After some experimentation I do find my 2m-3.9m Tenkara rods work best and are usually more efficient & effective than a western rod for me in the conditions they were created-designed for; the small creeks to mid-size rivers where casts will be 10’-22’. I can also expand the intended use of my 5.3m Keiryu rod to reach a far bank out to 30’ with a “Tenkara-style” level line and cast on a couple of atypical larger streams where I can wade out far enough not to have trees on the bank and riparian brush snagging the long length of line I have to carry in the air when casting.

I’m not a social media user really, so I’ve always wondered - do people debate this is real life or only online?

Anyway, I am curious about the whole notion of a handicap. I mean, isn’t any type of fly fishing technically sub-optimal compared to bait fishing (or heck, using a net)? I mean we’re all choosing to handicap ourselves somehow, so why NOT use a fixed line rod for big fish if that’s what you want to do. I mean, nobody criticizes bow hunting, even though it’s clearly sub-optimal compared to using a fire arm.

I mean, isn’t any type of fly fishing technically sub-optimal compared to bait fishing (or heck, using a net)?

Not always. If you consider a high gradient stream with a heavy flow and a complex rocky structure, fishing bait or a net would be challenging. If one were to employ tenkara techniques to that water, they may be way more efficient.

Most fly presentation techniques lean on trying to trigger feeding on fish that may not be actively feeding. As a teenager I have seen so many trout turn down a freelined garden worm. On several occasions…really more often than not…, I have spin/fly fished water with bait guys and have out fished them.

The power in flyfishing is in presentation. Sometimes it can be much more effective then other methods. It is conditional, and like any tool has conditions it shines and conditions it is lousy. Like in wind or targeting distant or deep structure.

I mean we’re all choosing to handicap ourselves somehow, so why NOT use a fixed line rod for big fish if that’s what you want to do.

No argument there. This thread is mostly about definition of our activity. I was mostly correlating the relationship between the activity definition and the efficiency. The less handicap and the more efficient the use of techniques / equipment become… the more likely one is exercising their defined use. Going back to my downhill ski analogy, just because one is using the equipment does not mean they are engaging in the activity. All the criteria need to be met. Can someone use downhill skis to get from point A to B over flat and rolling terrain, one would normally use crosscountry skiis? Yes, they can but it is not downhill skiing. Not sure if it would be cross country skiing either. It would be trying to cross country ski with downhill equipment.

Going back to my downhill ski analogy, just because one is using the equipment does not mean they are engaging in the activity. All the criteria need to be met. Can someone use downhill skis to get from point A to B over flat and rolling terrain, one would normally use crosscountry skiis? Yes, they can but it is not downhill skiing. Not sure if it would be cross country skiing either. It would be trying to cross country ski with downhill equipment.

I relate to this analogy having been a backcountry skier on tele and randonee skis that used downhill ski area runs for early season warmup and equipment checkout. I could not ski the runs as fast or effectively as someone using downhill skis, nor could someone on downhill skis get very far in the backcountry.