meaning of the word

I’m going to try fishing Todoroki-san kebari for a little while. I like what he does. I think this will be fun and it will provide a little influence on the way I do it.

I have learned quite a bit from collecting kebari.

It helps me make decisions on how I do it. 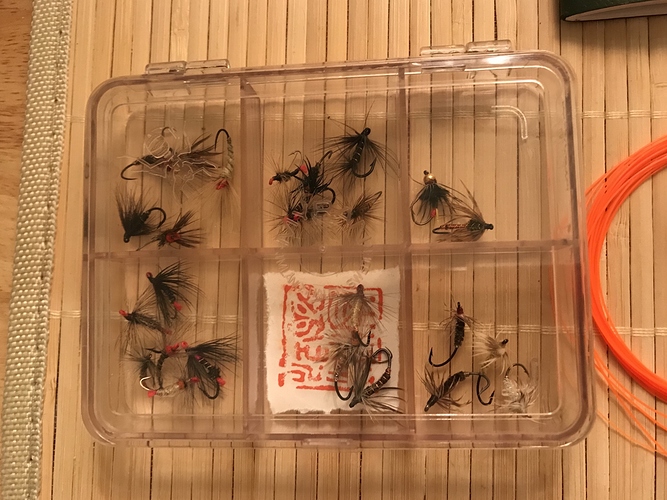 Let’s learn from the pleasure in each other

I think that Todoroki-san’s blog post on Sept 28th, is related to the concept of 漸近自然. Though maybe a little different.

Wherein Todoroki-san writes, as best I can translate it:

Clothing and equipment that does not impair safety and health
Knowledge of mountains and streams that protect fish and myself (yourself)
Edible wild plants, mushrooms also the same
Things to do In gratitude and respect
I think that this is the real intention (Spirit) of Fuji Sudo (Shindofuji) ~~~

Accept or respond to
Nature (or own nature) · river · fish

Both are a Trinity
(That three things are essentially one thing)

~~~ I am not quite certain how to translate Fuji Sudo or Shindofuji [身土不二].
身土不二 is a Buddhist concept. The weblio website defines it this way:
you are what you eat; slogan encouraging consumption of local seasonal foods for one’s health; indivisibility of the body and the land (because the body is made from food and food is made from the land)、inseparability of body/mind and geographical circumstances.

I think it is a somewhat similar to:
“A man is what he thinks about all day long”. - Ralph Waldo Emerson. Or -
“As a man thinketh in his heart, so is he”. Proverbs 27:3

iow - the idea that we are influenced by our surroundings; environment, mental / spiritual / thoughts/ attitudes, & experiences. Self determination by the places and ideas we choose to surround ourselves with. Choose carefully!

Google translates 漸近自然 as Asymptotic Nature. Asymptotic (an asymptote) being a mathematical concept where a curve approaches a line very closely, but the two never touch. Two functions approach unity as the two functions reach their limits. Which I think fits the idea of slowly approaching the unity of the 2 Three Treasures.

Thank you for wonderful interpretation to 身土不二

Ah, playing around with the individual kanji in 身土不二 . I discovered a literal meaning that I think is close to the meaning of the whole phrase.
身Body 土 Soil (earth) 不 Not 二 2. Body and Earth Not Two. Unity or One. Coming closer to the essence or understanding of things.

I like it, but also recognize it is the part I struggle with most.

really complicated stuff…especially when the footprint of modern life can break the focus.

I live and fish in human populated areas.

Angler trash is a big one for me. I do occasionally pick up after others, but seriously addressing the problem would consume a whole day alone on some of my rivers.

Automotive noise is a huge one for me as well.

I am fortunate to be free of much of my competitive drive, but still some lingers. I am human after all. Nature is competitive as well, but for an angler I believe there needs to be a healthy presence of drive without frustration. Frustration has no place in angling. I do not gravitate for fishing with anglers who are overly competitive or easily frustrated.

I have not gotten into binge fly fishing/backpacking, but I do some binge surfcasting.

There is something about fishing every day for a week. Similar to what happens when one goes away on any vacation. The first several days are dedicated to acclimation to the environment. Then a certain understanding of the environment is achieved and a connection is made.

I know some guys fish every day. I do not have this luxury.

I have sort of noted how fishing is like being a fine artist. And as a fine artist needs full immersion and dedication to their art, it seems the same is necessary for a fisherman to achieve the most complete focus in body>nature>fly fishing. A solitary immersion in nature.

Get your hermit for a week cards stamped and get out there…hahahahaha.

Mr,@Gressak Although it may be rude

Get your hermit for a week cards stamped and get out there…hahahahaha.

I am preparing a substitute for it

I am preparing a substitute for it

If you ever hit the northeast in the US, be sure to give me a heads up.

If you ever hit the northeast in the US, be sure to give me a heads up.

I have learned quite a bit from collecting kebari.

I agree, but also feel that the fly is a part of the equation.

Where I feel that I learn the most is fishing with the author or the fly/lure. The context of the design and how they use it may not be easily translated into words regardless of language, and may only be fully understood in watching them fish.

I have learned the most by fishing with others. The context of the day on the water and the choices to convert fish can fill volumes.

We need a teleport to make fishing with our earthling buds like Todoroki-san easier.

I learn most when I fish by myself.

Catching becomes secondary, quiet time in the forest, it helps me keep on track. I go fishing to escape aggressive people, to get away from the city.

I read the arguments in people’s writing and it makes me want to go fishing to escape it.

I have very different ideas of what is good for my fishing. Arguing points is not tenkara. It does not help.

Sharing thoughts, respect for each other and what we do together here, that takes us closer to fishing and describing what it is.

todoroki-san, you are welcome in my home anytime, be careful what you say to me, I may take you up on it.

have a great day!

I really enjoy your decisions. It gives me a chance to get insight into what other more experience Tenkara
fishermen think about. Thank you for sharing information so freely with the community. It is a joy to read this information to guide me through my own journey of Tenkara fishing.

My intent on my note is not argument but rather a conversation.

I agree that i too learn a lot when i fish alone. It is often when i am most focused.

I have also learned a lot about fishing by disecting another anglers aproach and the tools they use. Often it gives me new windows of posibility.

There is no borders for fishing
But since culture and nature are different, the difference is more interesting

I have very different ideas of what is good for my fishing. Arguing points is not tenkara. It does not help.

Sharing thoughts, respect for each other and what we do together here, that takes us closer to fishing and describing what it is.

Have a nice day together with everyone

I have also learned a lot about fishing by disecting another anglers aproach and the tools they use. Often it gives me new windows of posibility.

In 2009, I started watching videos from Kazuya Shimoda on tenkara. At the time, I had just got my first rod from Daniel and I struggled a little because I had no one to watch or go with.

I found that Shimoda-san was a genryu angler and he also used a cut western fly line. So I found one very light and cut it (I still have it) and began to advance my skills quickly.

I then came to understand Ishigaki sensei and his level line school, so now I watch his videos and learn that skill which is what I prefer today.

I went to Japan a couple of times and watched and learned about what others do.

I have learned that tenkara is highly interpretable, almost as much as the many people that do it.

So watching all those different anglers, I develop my own style, my own skills and I do that best by myself, alone.

When I get together with friends and fish together I learn something else.

Although I have learned many things from other anglers and myself, the rod, line and kebari are my teacher, the fish grade my test.

I enjoy sharing what I have learned with a diverse set of people that are also willing to share.

It’s fun and a great way to learn something from others that learn by the same teacher, the rod, line and kebari.

Truly, this is our common teacher.

Thanks for your time.