Yesterday evening I discovered a YouTube video titled - Fujioka Kebari. It was uploaded by Tenkara Stuff, which also happens to be a commercial site in the UK. However, it seems to be more a website from a Tenkara fan, than a site whose primary purpose is to sell tenkara items. I have yet to discover the owners name. He has an interesting Tenkara story on his website. Seems he was familiar with Tenkara before Tenkara USA started. Worth reading, I will post the links below.

Anyway, I found his video interesting because this kebari looks a lot like the kebari I posted about on the Tenkara-Fisher forum last summer. Called the ゼンマイ孔雀止め毛鉤 or ゼンマイ胴クジャク止め 毛鉤 Zenmai body/torso peacock stop kebari, (maybe not an correct English translation). That Takashi Yoshida-san wrote about in the 2013 Spring Issue of Headwater Keiryu magazine. More about that later.

I like his kebari tying videos, I think there are six of them. He is a skilled tier. I like the way he preps the Zenmai in this video. It’s an ornery material to manage, at least for me thus far.

I tied this version from the Keiryu magazine article. 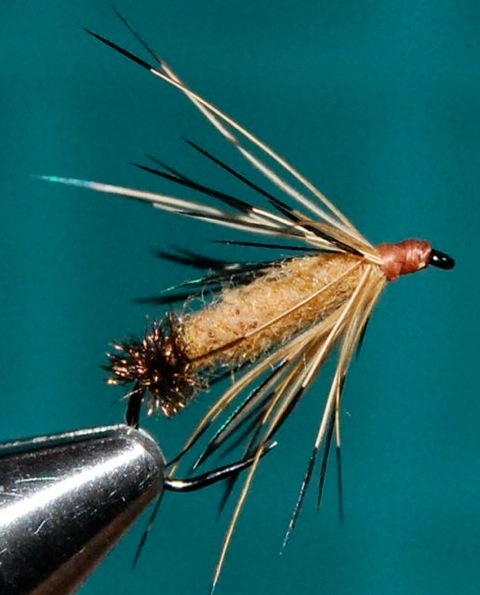 As I recall I fished it a few times and it was fish approved.

The Takashi Yoshida-san article in the 2013 Spring Issue of Headwater Keiryu magazine. 渓流２０１３年・春号 begins on page 104.

Part of the title is 佐藤垢石の毛鉤を巻く , Winding the Kebari of Koseki Sato.

佐藤垢石氏 Mr. Koseki Sato was a well know fishing essayist, and author of books. I think Mr. Koseki Sato passed away in 1956 at the age of 68 y.o., so they are old school kebari patterns. Takashi Yoshida’s article in the magazine is about winding 10 different kebari found in Koseki Sato’s book, 山女魚釣 , Yamame Fishing. This book was written I think in the late 1930s or early 1940s.

This picture, from the Yoshidakebari blog, shows a scan of the ten kebari in book. I think the Zenmai body peacock stop (end) kebari is the #8 kebari. (maybe I will be able to find an online picture from the magazine article showing this kebari and post it later.) 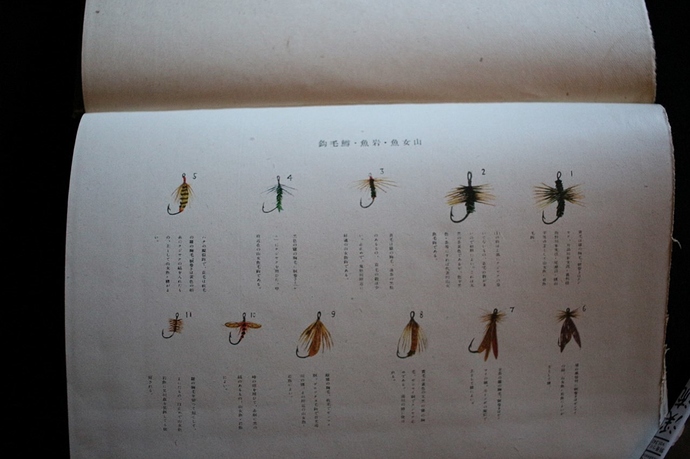 In this Jan. 2013 blog post he writes about discovering the same two books in Tokyo.

Anyway, I think you will find the Tenkara story of the guy at Tenkara Stuff interesting. He writes that he was introduced to Tenkara when he was a boy by a Chinese Chef who had lived most of his life in Japan before moving to, I guess, Lincolnshire.

His name is Rae Leeson and he is the owner of Tenkarastuff - http://tenkarastuff.com/shop/
He has a small shop,in Glossop, Derbyshire, which is on the edge of the Peak District in the UK. I came across his site a few months ago and have since bought a few items. I am currently awaiting delivery of one of the 12’ Tenkara rods he sells.

In addition to tying flies I believe he makes a lot of the stuff he sells. He also teaches Tenkara fishing.

I have found him to be very helpful, as well as offering value for money in what he sells. His service is excellent. As you say he has been Tenkara fishing for a long time - 35 years!

His name is Rae Leeson and he is the owner of … a small shop,in Glossop, Derbyshire, …In addition to tying flies I believe he makes a lot of the stuff he sells. He also teaches Tenkara fishing.

I have found him to be very helpful, … His service is excellent. … he has been Tenkara fishing for a long time - 35 years!

Thanks David,
After getting the time to poke around his website a little bit more I found the name Rae, but not his last name.
And I also found he offers more products than I supposed from my initial quick look. Seems his shop, blog have been around a couple of years already, but I had not seen it before. Hard to keep up with all the internet tenkara activity today. Interesting guy.

I may have discovered why Rae Leeson called his kebari the Fujioka Kebari.

If you look at the following webpage from the Fujioka Yoshikazu website, under the section labeled - Hida Shokawa area - the right most kebari is very similar to the kebari he ties in the video. All four kebari have pheasant’s feather hackle and zenmai or peacock herl bodies.

You can look back through the archive Covers of Tsuribito publications starting at the following web page. The archives go from present to about 2006/7. 15 covers per page going back 38 pages.

I found the 2013 Spring issue of Keiryu magazine on page 17, and I was surprised to find it was the earliest issue of that magazine that I found. I wonder if that was when they started publishing this magazine ? Or if their archives are incomplete?

A better view of the Cover, TOC and two internal pages can be seen in the following blog post. The images zoom if clicked. Unfortunately none of them are from the Yoshida article.

Seems the Tsuribito Covers Archive is far from complete.
I just discover a website 別冊釣り人 渓流シリーズ, Separate Volumes Tsuribito Keiryū Series that shows an issue from 1987, that is tagged , First Issue, The Last Jobs Fishermen (shoku ryōshi-tachi) in Japan. 創刊号 日本最後の職漁師たち. And curiously the 2013 Spring Issue is the last one listed.