…or “A little tenkara in a most perfect setting” This is the long-form version of this post, it’s a 15 minute read, grab a coffee and settle in! Alternatively, here is a short form version with som…

My first ever blog post (so please be gentle!). A long overdue account of a trip to Trentino, Italy with John Pearson and Vito Rubino last July. Hope you enjoy it!

Enjoyed reading that, great first blog post! Certainly an area I’m keen to visit. John has mentioned it enough times too! I recall a good podcast with Vito I think it was talking about the various licenses and access etc, must revisit it.

That’s kind of you, thanks! I think they may be full up for this year’s trip (though do check)… But there is always next year!

Not sure but that hybrid might be a tiger …brown/brookie

Could be, I’d not considered that and can’t claim to an expert. but in this part of the river there are very few if any bookies, we did not catch any, brown trout dominate and marble trout are increasing in numbers, those they are rare!

brown trout dominate and marble trout are increasing in numbers

The tiger trout (Salmo trutta × Salvelinus fontinalis) is a sterile, intergeneric hybrid of the brown trout (Salmo trutta) and the brook trout (Salvelinus fontinalis). The name derives from the pronounced vermiculations, which evoke the stripes of a tiger. The fish is an anomaly in the wild, with the brook trout having 84 chromosomes and the brown trout 80. Records show instances as far back as 1944. The cross itself is unusual in that the parents are members of different genera. Tiger trou...

If they are tigers, my understanding is that they are sterile and rare in nature…but are often a tool in stocking programs. Perhaps the ones you are getting are stocked…especially if they have a regular occurrence.

Ah, I see your line of thinking. Makes sense, however, We met the guy who runs the (very limited) stocking for the river. He explained that the only stocking is of marble trout, they are a native, naturally occurring fish in these rivers. Over fishing in the past means nature has needed a helping hand to get these relatively new “no Kill” zones back to a position where there can be a self sustained marble population.
I suppose it’s possible there may be the odd tiger on the stretches with plenty of brookies. But as you say they are very rare.
I feel pretty confident these were marble hybrids, the odds if them being tigers are just too slim

What are they hybrids of?

Sorry, me being lazy and imprecise. Those pictures in my blog post were of Marble-Brown hybrids.

I’m no biologist, but it’s my understanding that marble trout and brown trout are in fact both salmo trutta. It’s and example of them being one if the most polymorphic vertebrates on the planet. They are endangered https://link.springer.com/article/10.1007/s10750-006-0479-3

This one is probably 50/50, by the look if it, so perhaps first generation hybrid (say a brown trout’s egg fertilised by a marble trout). 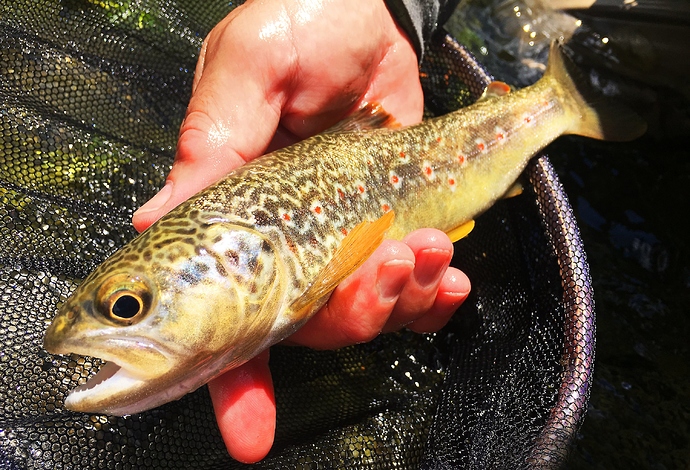 Whereas this one may be second or third generation (perhaps the egg of a hybrid, fertilised by a marble) since it is much more “marble”, and less “brown”. 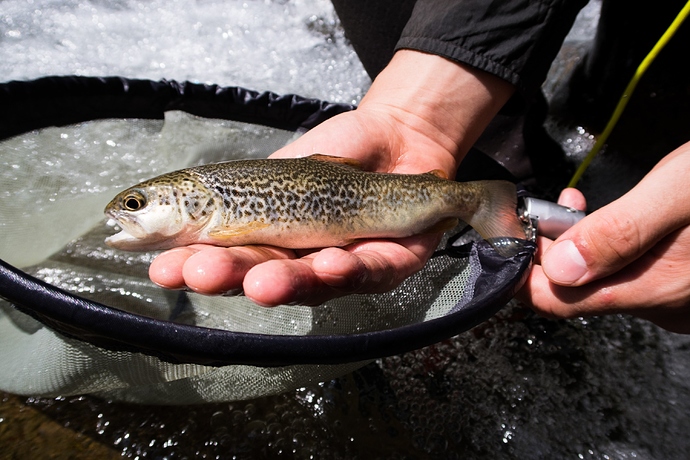 These are “pure” marble trout, used by the local fishing association for restocking. 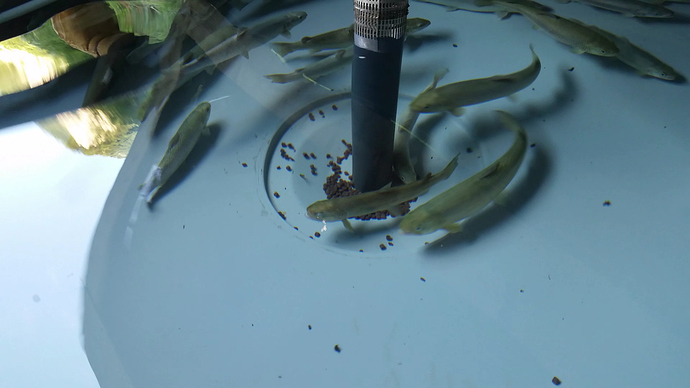 Sorry I don’t have a better picture, but they are in the fishing Association website I think.

I’m just going on what I learnt out there and have read since.

Very cool. Thanks for the education. Never heard of them.

Whoa. Looks like they are limited to that region. What a treat to catch such a specific regional fish.

Those are beautiful @russfx! The few times I’ve been in this area of Italy, I didn’t have the chance to go fishing (granted one of those times was my honeymoon). The first time I learned about marble trout was when I was in Croatia in my early 20’s and they’ve been high on my list of fish I’ve wanted to catch in their native environs, ever since.

The tiger trout (Salmo trutta × Salvelinus fontinalis) is a sterile, intergeneric hybrid of the brown trout (Salmo trutta) and the brook trout (Salvelinus fontinalis). The name derives from the pronounced vermiculations, which evoke the stripes of a tiger. The fish is an anomaly in the wild, with the brook trout having 84 chromosomes and the brown trout 80. Records show instances as far back as 1944. The cross itself is unusual in that the parents are members of different genera. Tiger trout ca…

Off topic from fishing in Italy, But I recalled the mention of Tiger trout here and thought this would be follow up to that topic.

A few years ago I caught several fish I knew looked like trout, but not a species I could identify, then someone told me they were Tiger Trout. I had never heard of them before. They are a cross between a male Brook Trout and a female Brown Trout. At the time it was spring and I was fishing a small lake, it had recently rained a lot making river fishing a risky venture.

Earlier this evening I came across a picture showing another hybrid trout I had not heard of before. The Splake , aka Slake. A cross between a male Brook Trout and a female Lake trout. I don’t know if they stock them where I live. With a quick search I found them stocked in Wisconsin and in Ontario, Canada. I assume they are stocked in other states.

Comparison of Lake trout, Splake, and Brook trout. Apparently Splake are often misidentified as Brook trout. One key identifier is the Splake will have a slight forked tail. Another is a different shaped head.

There is a good picture in the Wikipedia page for the Splake comparing it to Tiger trout.
https://en.wikipedia.org/wiki/Splake

Splake are very popular in Maine too. However, people are usually encouraged to catch and kill as they feed much more aggressively than native brook trout. They’ve been introduced (primarily in lakes) in areas where brook trout have had problems maintaining stable populations.