Here is my first ever fly! (well… the 1st one I’m willing to post a pic of, at least) 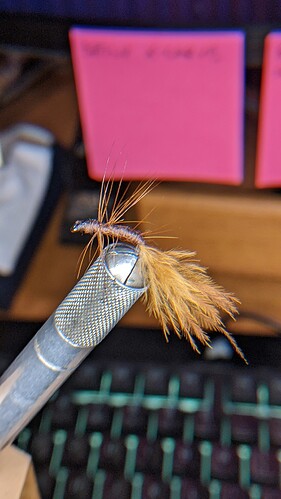 I don’t really know what it is, but I loosely based it on a “March Brown Flymph”. My thread is too thick, I don’t have the right type of feather for the tail, so I used the light and fluffy stuff at the base of a "Chinese Saddle Hackle, and the hackle is from the top part of the same.

Looking forward to trying it out with my tenkara rod when it arrives.

What are some other “firsts” from people?

Nice fly! Welcome to the fun and new journey.

There is something wonderful about catching trout on our own creations.

I dont have any pics of my first flies but I sort of wish I had, especially the ones that caught fish immediately.

I tied up like a fly, with such a tail, for fishing rainbow trout. But when fishing was a lot of flattering, but I could not hook (back) fish. It seemed to me that the fish had enough for the tail, I decided to cut off half the tail with scissors. Ai Trout began to catch.

That is a very good point. I probably should make the tail a little shorter and tie it up higher on the straight part of the shank.

The main thing is to carry scissors or a knife with you, and not be afraid to cut the fly.

Getting better. This one has some pheasant things (barbs?) for tail. I like this kind of stripped down looking fly, but have no idea what it is most like. Will have to study a bit and see if I can find an existing pattern that is similar and try to tie it. 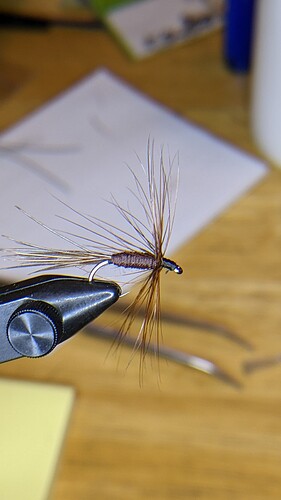 Nice flies! It’s always fun to mess around on the vise. Kebari are a great way to get going and learn various techniques. Keep on sharing - looking forward to seeing the progression… and perhaps one of those in the corner of a fish’s mouth!

As far as comparative patterns, you may find something here, it’s a wonderful resource of traditional regional kebari. (Also great for inspiration)

Thank you for the kind words and the AMAZING resource link. My Tenkara rod(s) are due to arrive any day now and I’m hoping to try the flies out soon. Need the snow to calm down a bit up in the Cascades though.

I love it!
Here is a similar pattern I like this time of year: Soft Hackle Pheasant Tail – Fly Fish Food

If you want to get crazy, this has been my top producer using the tight line nymphing techniques(except I prefer using the inverting beads so the fly rides level): I just got into the Fly game via Tenkara about a year ago and tying about six months ago; so far its been another super fun way to catch fish.

Are you in Washington? Nearly all Washington wet side Central & South Cascades streams that are open year round (prior to Saturday before Memorial Day stream opener) will likely be blowin’ and too high to wade safely for short range Tenkara casting until very late June-early July. There’s only a couple of wetside South Cascades streams I know of that may be in shape earlier including one open for a short time for Whities in winter. PM me if interested.

Those are some neat looking nymphs. As it happens, I did try tying a couple pheasant tail nymphs yesterday. I don’t think they turned out too badly. Here is one of the better ones. 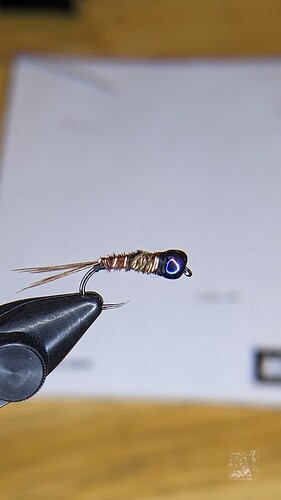 I think I might call this one “Rosie”, because it “ain’t exactly pretty, and it ain’t exactly small”. I kinda threw the kitchen sink at this 1st wooly bugger. Good learning experience, but I think I will omit the copper rib on the next one I tie.

Also, this is the first fly where I’ve broken the hook in the vise. Lots of leverage on that long shank. 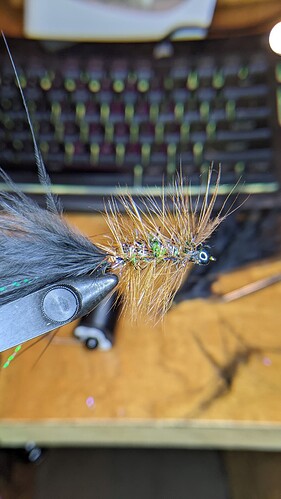 This one came out better. 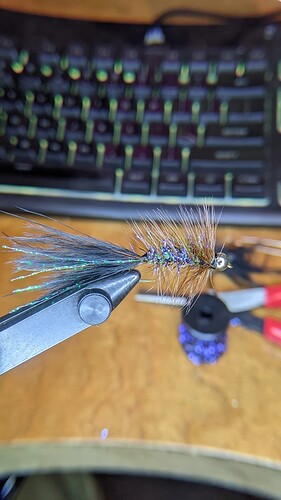