About 25 years ago Dr. Ishigaki made 4 tenkara videos for the WSF (Weekly Sunday Fishing) series of videos.

If you like seeing old videos made during the era of his early promotion of tenkara you will finding these video fun to watch.

They are only available on VHS used, and not easy to find. But they show up from time to time on auction sites or on Amazon. Two of them can be found at for a reasonable price, one usually high priced, and one of them I have not be able to find at all.

アマゴンスキー ( Amagonsky) aka 木村一成氏 Mr. Kazunari Kimura list the four videos on his blog with pictures of the video cover, and a brief description of their content.
Kimura-san is a photographer, and he also appears with Dr. Ishigaki on their 実釣！レベルラインテンカラ [ Real Fishing ! Level Line Tenkara] DVD.
His YouTube channel is アマゴンスキー Amagonsky .

Here is a list of the titles with my crude translation. Listed in the same order as they appear on Amagonsky’s web page from top to bottom.

「最強レベルライン」榊原正巳、石垣尚男
"Strongest level line" Masami Sakakibara, Hisao Ishigai
This video’s content is about Tenkara no Oni’s advanced casting techniques being shown with some clever camera work. But concludes that the filming technique was unable to capture 10% of his amazing casting skill.
This one thus far has been impossible to find.

「テンカラ先生の誰でもできるテンカラ入門」 石垣尚男
Tenkara Sensei’s Anyone Can Tenkara Introduction Hisao Ishigaki
Primarily this video is an Introduction to Tenkara. Basics such as Tenkara’s etymology and history, casting and approach to stream point, points of view and how to wrap kebari are explained in an easy-to-understand manner.
This is by far my favorite of the videos I have from this series. It’s also the most expensive to purchase if it can be found. When I found it two were available, after I ordered it the one left had increased in price by about 30%.

「テンカラの達人1」 出演、竹株渓遊、天野勝利、石垣尚男
[Tenkara Masters 1] Featuring, Takekabu Keiyū, Katsutoshi Amano, Hisao Ishigaki
Takekabu-san’s casting of an 8m nylon level line with a 3m rod, which looks an over reaction compared to Amano-san’s like cast. Amano-san’s tactics used fishing for amago are seen, and Takekabu-san is shown tying one of his favorite kebari patterns stream side in hand.
This is probably my second favorite of the three.
You get a bit of break on this one if you’d like to watch it because it has been posted on YouTube for a couple of years. Probably in violation of copyright. I will post it below. The videos are each about one hour in length.

「テンカラの達人2」出演、瀬畑雄三、堀江渓愚、石垣尚男
"Tenkara Masters 2" Featuring, Sebata Yūzō, Horie Keigu, Ishigaki Hisao
Amagonsky’s description states this video contrast the styles of these two tenkara anglers, which he believes will be confusing for people seeing tenkara for the first time. Small & large kebari, short & long lines, early and late awase are all discussed.
Note: afaik, the difference between Atari (当たり), and Awase (合わせ) is an Atari is a hit, and Awase is actually hooking the fish. Awase will frequently translate as “combined” or “matched”, but I’m still a little unsure of what they mean in Japan.

Anyway, if you would like to watch Tenkara Masters 1 - here is the link to the video on YouTube. But it was not uploaded with that title.

1 Like
『職漁師伝 渓流に生きた最後の名人たち』("The history of the commercial fishermen, the last masters who lived in the streams."
troutrageous1 (Michael Agneta) January 11, 2017, 2:01pm #2

Thanks for posting this David!
(Also, testing out some of the features in the reply functionality. Seems pretty straight forward.)

I’ll have to watch the video you embedded, not certain I’ve seen it before. The whole series you outlined looks really interesting!

It’s a great video. I’ve probably watched it three times over the past year. There are several others that are great too that aren’t directly related to it but have similarly great information.

If nothing else, it was good for me to see another person’s technique.

I posted it on TF Forum when I first found it on Youtube. Long before I learned that it is from the WSF series. Before I discovered they existed. Only later did I learn it is the Tenkara Masters 1 video. There is a lot of my rambling about Takekabu-san’s Casting style there. Taken from several old post about him on the Parmark web site.

Thank you, David. These are a great resource.

To add a little more information about when these videos were made. It has been a few months since I last watched them. Back in July I think. I can’t find a published date on the box nor in the movie credits. But maybe I just missed seeing it.

For some reason I was thinking all four were made over a four year period, but that appears not to be the case.
A comment below the the video on Youtube states that Tenkara Masters 1 made in 1989.

On the Oni_Tenkara web page linked below states that the Strongest Level Line video was issued on Feb. 1998. (I keep thinking there must be a better translation).

I would assume the Tenkara Masters 2 video was issued sometime after 1989.
Would it be logical that the Anyone can Tenkara Introduction video was made first?
For some reason I seem to recall finding that one of them was made in 1992, but maybe that is an incorrect memory.
The Tenkara Masters 2 video might fit that date. Maybe I can figure out the dates of issue using an ISBN search.

Anyway, watching them feels a little bit like looking at the family photo album and realizing you once looked a lot younger than you do now.

Great video! Thanks for posting.

It is an introductory video 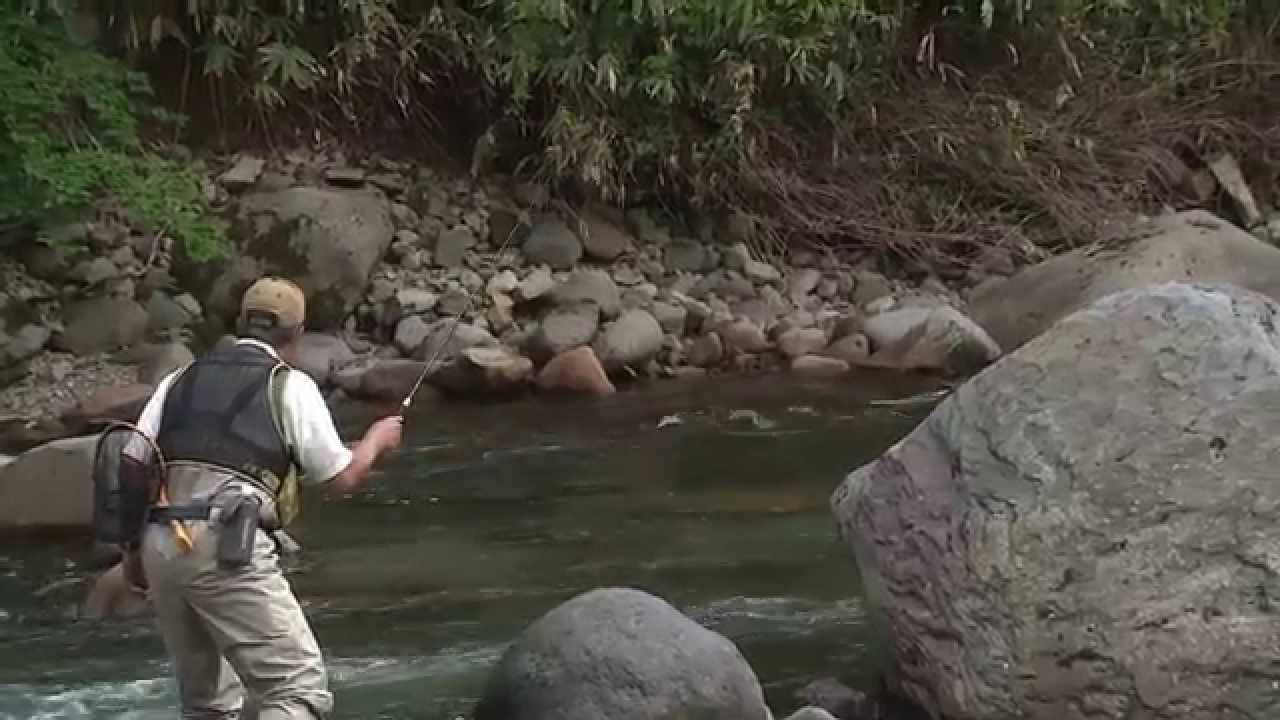 Todoroki34, thank you for posting that video.
It caused me to recall the version of 'Fishing Café “Tenkara with Hisao Ishigaki”" with English subtitles that was on the Tenkara-Fisher forum. About 53 minutes.

The post there was also paired with this link. The website with: Tenkara"Waza" with Hisao Ishigaki (trailer), and Tenkara Do (with Sebata Yuzo) videos.

Thank you very much David.

I have watched that video many times in the past year and it has helped me improve my casting skills.