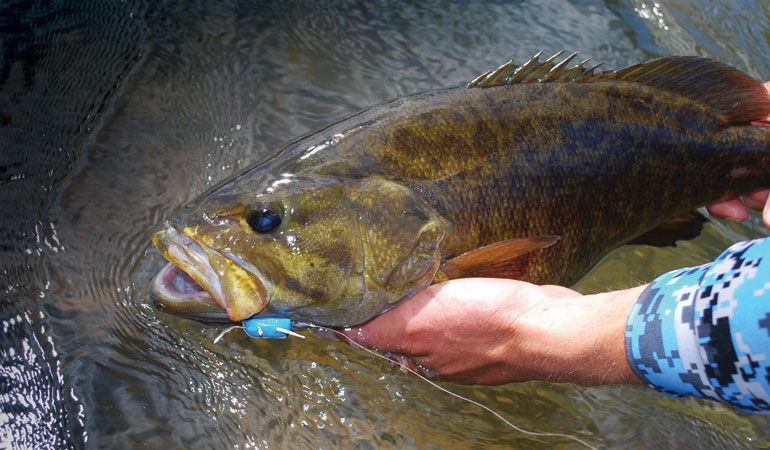 A scientific look at how trout and bass perceive reds, blues, and greens.

And here is another take on whether or not color can and will make a difference: 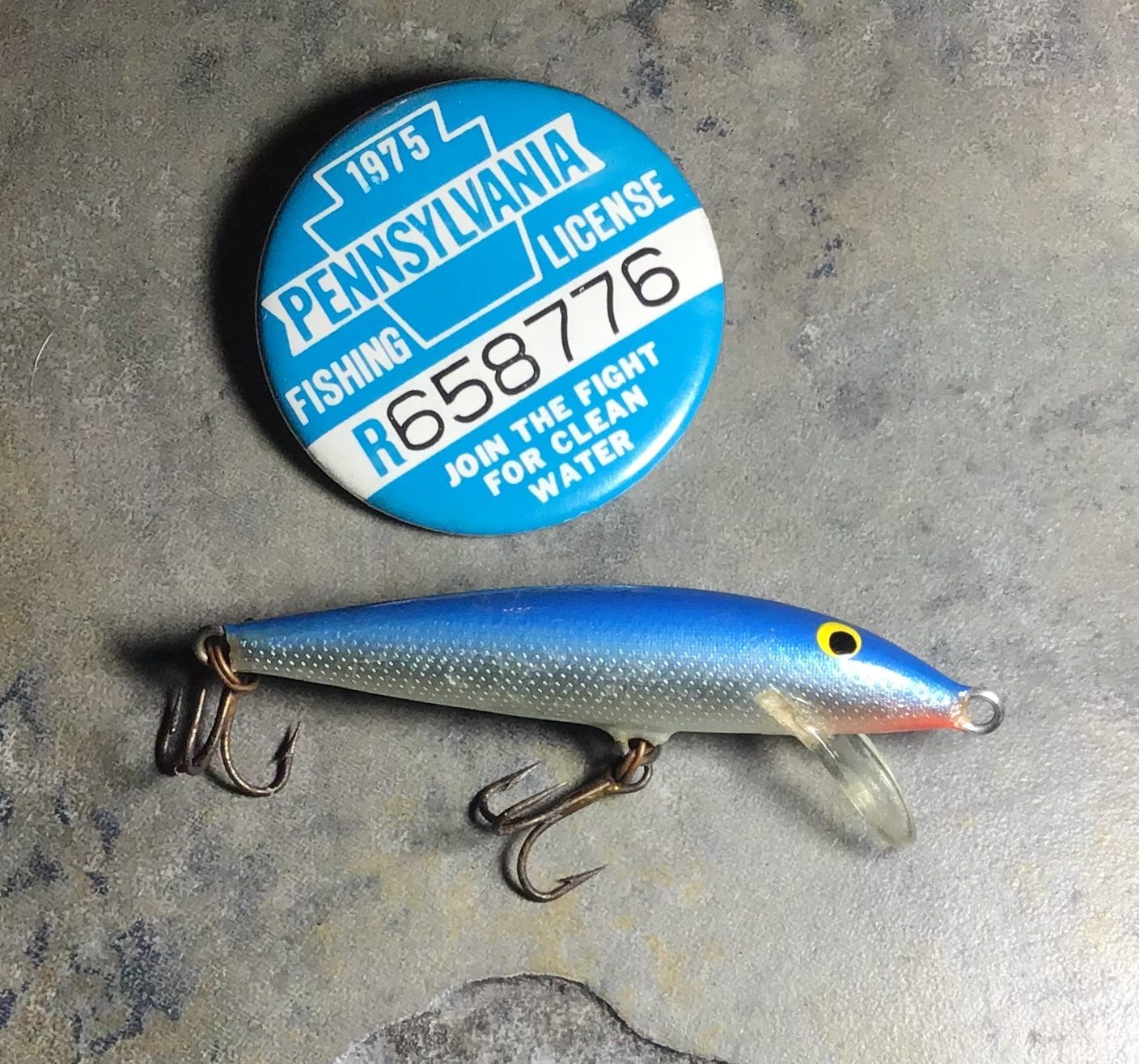 The Power of Blue - Glenn River

The short story: Several years ago I bumped into Ed Engle at the fly show in Chicago.  Ed was conducting a fly-tying session, tying small flies of course.    I showed Ed several flies that I tie and fish as I am also very fond of...

I think sometimes it matters but most of the time not.

My Shenandoah Blue Poppers are generally more productive than other colors on bass from my experience, so I use them and they work. They must be the right shade of gray then.

The two different articles above say that color has little to no relevance in catching fish (first article) or that the right color can make all the difference in the world as to whether you will or will not catch fish (second article), so who is right? Actually, they are both correct but for different reasons, in different places, and at different times.

As mentioned in the first article, fish use their senses of motion, sound, smell, and size and shape to find their food, but their eye sight is the sense that they rely on the most. Here is an example of just how much fish are dependent on their Eye Sight to capture their prey: Dr. Loren G. Hill placed transparent caps on a group of fish’s eyes and offered them live crayfish. The fish were only successful in finding and eating the crayfish 6% of the time they were offered to them with out their vision. Next, the eye caps came off and the fish’s nostrils were plugged so they could not smell their prey, and the fish found the crayfish 100% of the time. For predatory fish to engulf their prey or our flies, they half to be able to see them.

Both articles were written from a Match The Hatch point of view, which is something most tenkara anglers Choose to largely ignore. And neither article took water color or water temperature (and how they effect fish) into account. And not much was said about contrast either, which is probably the biggest omission of all. The Power Of Blue Article leads us to believe that fish must have a decided preference for blue colored baits or blue bait parts at least, over and above all the other colors, and neither article took Brightness into consideration either.

Water comes in an infinite variety of 3 primary colors - Blue for clear water, Green for snow runoff and algae stained waters, and Red/Brown for turbid (muddy) and tannin stained waters, and each respective water color will often make up the back ground the fish will view our flies against, so the most effective fly patterns include a color used somewhere on the fly pattern that contrasts with the water color you are fishing in.

The water temperature, i.e. Cold, Optimum, or Warm (which differs for each species of fish you may be fishing for) determines how big and how bright of a fly you need to use. In Cold water, the biggest and brightest patterns need to be used; the Optimum Temperature ranges, smaller and duller patterns will perform best; while in Warm to Hot Water temps, the smallest and dullest (black flies are very good here) of fly patterns should be used.

Fish do not really have color preferences. The colors that “attract” them best are the colors they can see most easily against the backgrounds where they live and are feeding, which will change with the water color conditions, lighting conditions, and various other factors

Motion is another highly important consideration, which involves more than just fly manipulation. Wherever possible, highly mobile micro-fiber materials (like wool, peacock herl, ostrich herl and marabou feather flues, pheasant tail and natural fur dubbing blends) should be used in the tying of fly bodies to create life-like breathing motion on and in the bodies of our flies, to make them come alive in the water during drops, drifts, and retrieves.

Whether Kebaries or soft hackle style ties, high feather web, highly pliant hackles should also be used wherever possible to add additional motion and life to our flies in both running and still waters.

Red is the most miss-used color used to tie flies with. Probably, most anglers are not aware of how a material’s color shifts from a bright red to a dull black in as little as a few feet of linear distance underwater. Colors do not look the same to fish in the water as they appear to us in the air. All standard colors loose their intensity under water very quickly. Fluorescent colors have the ability to maintain their colors at much greater distances but, caution is needed with FL-colors as too much will turn the fish off. Less than 30% of the total surface area of a fly should be made up of FL-Hot-Spots.

Another factor often over looked by the match the hatch types is The Stranger Theory. Many years back, on a family vacation, we camped on Rock Creek in a very windy area. As the sun went behind the ridge, the wind died and a prolific Blond Elk Hair Caddis hatch came off and the fish went crazy eating them, so I put on a #14 Elk Hair Caddis pattern thinking I would surely get a bunch. Matching the hatch in that situation was very un-productive. The fish were not taking my fly at all, and there were so many blond Caddis Flies on the water that I could not even keep my fly in sight for all the naturals, and all the naturals were also getting lost in the back lit conditions. Having had previous backlit fishing condition experience, I put on a #14 Black Caddis Dry Fly, which solved all of my visibility problems - it stuck out like a sore thumb in the glare. Not only could I see my fly better but so could the trout! I caught more rainbows than I could keep track of in the midst of a Blond Caddis Hatch on a Black Caddis Dry Fly. It turns out that the fish could also see my fly better than all the blond ones on the water and chose to eat my black Stranger Fly over and above all the blond naturals. Contrast is a good and often useful fly tying and fly fishing tool…Karl.

Excellent narrative!
I am reminded of a long scientific article I read some ten+ years ago written by a biologist about the eyes of tuna when that was my obsession.
To make a very long and technical topic short, the #1 factor in catching a predators attention is movement. Color is only relevant in making something visible against the background. Their eye has evolved to notice movement, often very very subtle, much more than anything else.
From the fish’s perspective it’s:
Everything that’s alive is food, everything that’s swimming in the water is alive, if I don’t eat it it’ll be gone quickly.

So, that’s the way I fish. Just makes it simple for me.

The Stranger Theory Explained: The Stranger Theory concept includes the use of purple, dark blue and/or black fly tying materials (either used singularly or in some combination together) to tie a pattern with that is about the same size and shape as the natural prey schooling fish the predatory fish you are fishing for are feeding on, but contrasts with the wall or ball of silvery prey fish Species that the predatory fish are in hot pursuit of.

Here, the contrasting color or colors provides a much more solid target over motion as the schooling fish use their many, individual, motions to confuse their pursuers and that defense mechanism makes them nearly impossible for the predators to successfully target any single individual fish. The “Stranger” gives the angler a strong advantage as the predator’s eyes and brains are Hard Wired to focus in on the motion of the contrasting Stranger’s coloration automatically. While the motion is a key ingredient for predators focus in on, it is the contrasting coloration that allows the predators to be able to see the motion of the darker fly pattern and choose to take your fly over and above the multitudes of schooling natural fish.

Without a Stranger to target, the predators charge indiscreetly through the schools of prey fish, slashing and striking aimlessly at anything and everything in front of them in the hope of creating some cripples that they can come back and pick up to eat later. The cripples often exhibit some motion but the dead fish mostly just sink motionless to lay still on the bottom if the water is shallow enough for that to happen. The prey fish also often exhibit color changes when they find themselves in hostile situations; they also put out alarm cell substances to communicate to the school that they are under attack, which may also aid the predators in locating the dead individuals with their olfactory abilities because dead fish do not move all that much but the Scary Stuff Smell takes a while to dissipate in still water, so motion, while it may be a primary means of targeting prey, is not always the only mechanism predators use for food procurement. Cripples can also be detected with the predator’s lateral line vibration sensitivity as well as by sight, enabling them to find prey that they are not be looking at and may not be in their line of sight. But, pretty much, to eat it they need to be able to see it, which is where the colors that provide contrast comes into their own…Karl.