For those who have fished the SX45 and the Sagiri 45MC…
Which do you feel is an easier, more casual one-hander?
I’m not looking to target big fish with either, but which could probably handle a larger fish? I know the Sagiri is recommended max 6x…

I have the Seiryu-X 35, and love it dearly. Incredibly light, extremely fun with a small to medium sized fish, and just beautiful. Not to mention, affordable as all getout.
I feel like the S-X is kinda a modern version of the Sagiri, without the zoom. They sound very similar on paper. For a lot of my medium to small stream fishing, I can use the 35, if not my Soyokaze 27. I feel like the two lengths of the Sagiri 45 would be beneficial, or maybe I’m overthinking things. A Seiryu-X 45 would be cheaper by a little, rated to 5X (always a plus), and easier to get parts for, for a longer time.

Chris - I haven’t tried the SX45 but I do own several Sagiri’s the MC39, 45, and 54. They are so light and nice to use I just don’t know how another rod could be better, but perhaps so.

I like the 39 and 45 so much I have new complete rod spares in case I total one of them, I only do that with one other rod the Suntech GM Special. I also have replacement parts. While I like other Fixed Line rods a lot, these would be the last I would give up.

On paper they sound incredibly similar. I am getting the Seiryu X 45, mostly based on how much I love the 35 and already know it…

@Chris_Lynch I’m curious to hear what you think about it because I’ve been debating between both of these as well.

I know lots of people really like the Sagiri, but don’t really know about the SX45.

I haven’t used a Sagiri. I’m sure I would love it, but I think I prefer the simplicity of a single-length rod over zoom, and I would rather have the 5X max tippet rating as well.
I am head over heels with my S-X 35, i go out of my way to fish it in situations when it might not be the most appropriate rod haha.

There are two streams in particular that I’ve got in mind for this 4.5m rod, one of which is my favorite wild stream in Alabama, a short stretch of creek between a small lake and some falls that is home to loads of redeye bass from 8-12". Lots of room for casting, and you gotta sneak up on these guys.

EDIT- It does help that the S-X is such a cheap rod. There are a few places where you can still find a Sagiri, and they aren’t terribly expensive, but it is both easy and cheap to get a S-X just about anywhere through the normal channels. 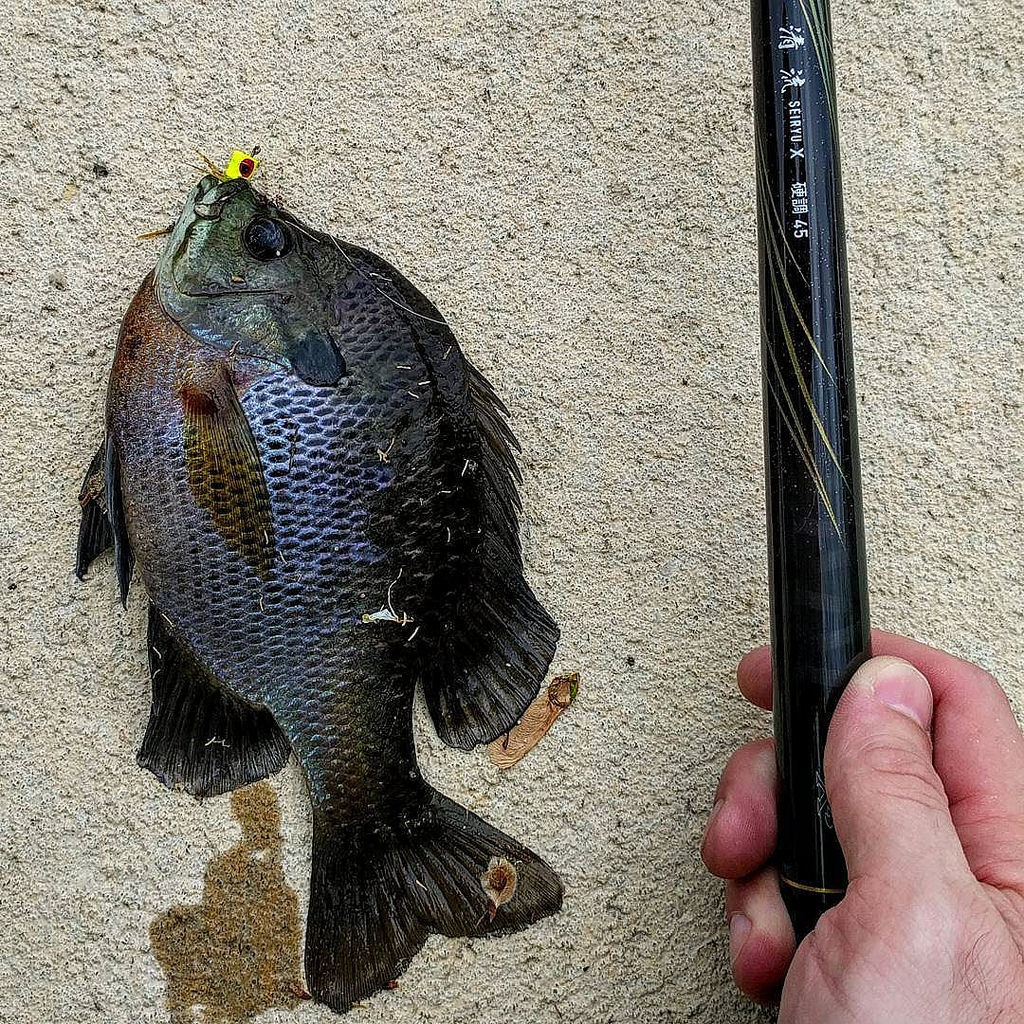 This rod is a weapon, a tool, a precision strike fighter.
I went to a local creek that I haven’t hit since last summer, which just happens to be around the corner from the post office that was holding my EMS package.
Immediately, I saw lots of sunfish, a couple bass, and at least one gar. This was in shallow (1-2’) stained water, with almost no flow, and lots of floating debris. Gross water. Lots of room above for working a 4.5m rod and ~4.5m of #3 level line though.
Started off throwing a beat up old #8 popper, most the fish were too small for it, finally got one, but then lost the popper right after releasing the fish.

Changed to this smaller micro-popper, and was getting fish on just about every other cast. I got two small bass to fight over it, but couldn’t get them to actually take the damn thing.

Green sunfish, bluegill, and redbreast sunfish were all caught, so the “alabama stagnant creek” panfish slam was achieved within an hour of unboxing the rod.

Pictured fish was my hoss for the afternoon, put up a noble fight.