An unexpected competitor for fish

Locally near our family vacation house over the last couple of years people say fish populations have declined due to increased Otter population. Last summer I saw a group of them on Deer Creek.

[as an aside, apparently sometimes pollution is a beneficial thing. The locals that live here year round say fish populations were much higher before the tannery, that operated in a town about 20 miles up river, shut down]

This summer fish seem to have almost disappeared in the small stream that runs along the south edge of my property. My sister-in-law lives just east of me, down stream. She has seen a family of Mink in front of her house several times this summer, [or they might actually be Fishers, that are slightly larger critters] Perhaps they are reducing the fish in my stream.

I was surprised to discover - Wolves Feed on Fish - we don’t have wolves locally but we do have coyotes. Once in a while we see one during daylight hours. Making me wonder if it might be desperate for food driving it to expose itself during the day near houses. If wolves compete with us for fish maybe coyotes do too.

…while managing a wolf/bear-jam at the south end of Gibbon Meadows, we observed a member of the Canyon pack capturing and consuming a trout in the Gibbon River.

This might be old news, common knowledge for many, but I was surprised to learn wolves feed on fish. Bears being the more common animal photographed catching fish in a stream. 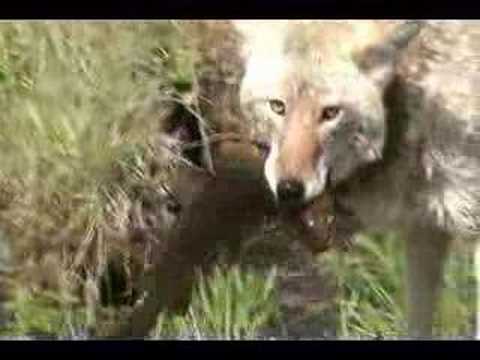 There are several YouTube videos of wolves eating salmon in Alaska.

That’s pretty amazing and the fact the coyote catches a fish multiple times in that short clip. It clearly knows what it’s looking for. On top of that, those are some huge fish for that tiny steam.