An Italian perspective on flies

Interesting point on some of those hooks. I don’t ever recall seeing them up turned like that before.

It seems they’ve taken (as have I in flies I’ve created) inspiration from a variety of sources and I’d guess they’re likely effective.

Are they flies? Are they kebari? Are they both? I guess that’s for each to decide on their own. Regardless, I’m sure they fish well.

The flies with hooks with the turned inward tips look to me like circle hooks. I’ve mostly seen them used in larger sized hooks for bait fishing. More specifically for salt water fishing.

From the featherandfluoro dot com website in S. Africa, for what they call - poly-nymphing. 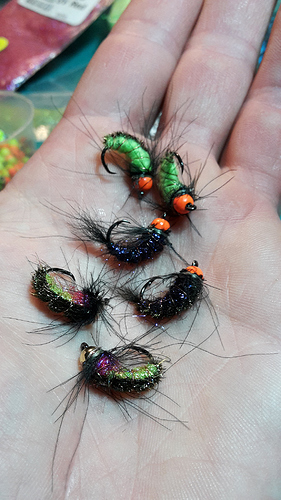 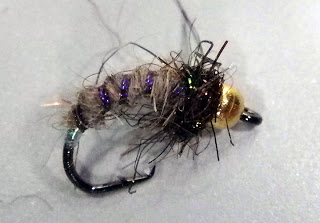 Circle hooks are claimed to provide easier hook sets, almost automatic hook set, due to the angled tip. However, I read mixed opinions about them. Some bait fishermen report more fish die from being gut hooked with them, and the hooks difficult to remove. Other websites say circle hooks reduce gut hooks. Hard to know who to believe. Yet the following website reports - circle hook flies are good for catching not keeping. But while that author starts off writing about the introduction of smaller circle hooks being a benefit. As you read on the smaller circle hooks are size 2/0.

Maybe an idea that didn’t work or find customers. The Moffitt Angling system referenced above seems to be kaput.

Anyway, the articles about hookless flies, reminds me of the forum thread about the Mystery of the Labyrinth Hook from almost a year ago. Fishing to get the take, but not actually hooking the fish. Similar to the Plains Indians idea of Counting Coup to gain the highest honor.

Or what this angler in Switzerland calls - Teasing.

Circle hooks are claimed to provide easier hook sets, almost automatic hook set, due to the angled tip. However, I read mixed opinions about them. Some bait fishermen report more fish die from being gut hooked with them, and the hooks difficult to remove. Other websites say circle hooks reduce gut hooks. Hard to know who to believe. Yet the following website reports - circle hook flies are good for catching not keeping. But while that author starts off writing about the introduction of smaller circle hooks being a benefit. As you read on the smaller circle hooks are size 2/0.

I have fished circle hooks. I have used them both for my own usage and for using with my young nephews. I can confirm you can still gut hook fish with them, as my nephews managed to.

They also can be difficult to re-program an angler’s response on strike. In order for the hook to do its work you can not set the hook, you need the fish to provide its own tension in order for it to set in the corner of its mouth.

I see circle hooks as a gimmic or not appropriate for most species. Technique can greatly reduce fatalities.

For me.
It is better to learn to set a regular hook at the right moment.
They are not appropriate for trout as a trout may spit the fly before it can engage.

They are not appropriate for trout as a trout may spit the fly before it can engage.

I’ve often read that a trout can spit out a fly within 200msec. I don’t know if Dr. Ishigaki was the first to measure that or if he only confirmed it by his own research.

The presentation of Dr. Ishigaki was shocking at that time
（Fish reacts in 0.2 seconds）
If so, we can not catch fish, but human beings can not do it, so many opposing opinions came out
(Human reaction time takes more than 0.3 seconds later than fish)
Angler than the fish was violently react to this theory
As a result it resulted in pain in the mouth and fish body of the fish
(A quick hook set is fished up)
An angler who had been fishing since long ago did not take this theory at all

I think that there were many people who laughed at the theory themselves among the fishermen
However, it was accepted for fishing beginners
That is because it became an excuse for when beginners could not catch it
（Theory armed excuse that can not be caught the fish）

Now laugh at everyone is the topic

The presentation of Dr. Ishigaki was shocking at that time

If so, we can not catch fish, but human beings can not do it, so many opposing opinions came out

I have first hand witnessed trout taking and spitting flies at imperceptible speed.
I have no doubts this is true.

This is prior to me hearing about Dr. Ishigaki 's statements, and I am not a beginner, nor would I ever use it as a crutch for failure.

A couple years ago took a friend fishing, and wanted to introduce him to tenkara. We got really lucky and stumbled on a pool that had freshly stocked fish. The spin fisherman were leaving with limits and there were still about 50 large rainbow trout packed tighly in a spillway from a dam that was only about 6 meters wide. We had a ball. All these fish were 13-20" fish…and fat.

What a wonderful opportunity. After demonstrating catching and landing technique, we each focused on fishing. I started to experiment, and after some time the fish got really picky. Then suddenly I started noticing fish coming to my fly enhaling it, but I kept on missing fish. I felt the fly bump their nosed on lift. What??? I had the benefit of being within 10 feet from my target, and also above them. Their takes and refusal was so fast I could not respond quick enough. I started to feel like I used to in a baseball batting cage. Anticipate the take and try to strike before they could spit it back out. I continued to miss another 4 fish. Trust me, these were takes…and so fast, no human could possibility land one unless by blind luck. They would rise up and their mouth would flash open and shut…my fly would disappear for a split second. It was nuts.

So my theory…
Trout have the capability for take and spit flies at lightning speed, but like everything in the natural world…it is not a rule. Its the same on how some fish dont spit a fly at all and will just hold onto it, where other times they will spit it the minute you try to put pressure on them. Like how you feel a fish take, but there is nothing there when you come tight.

I am against his opinion

If the angler does not notice the fish and kebari is liked by the fish, the fish slowly puts kebari in his mouth

I have no way of knowing if the 200msec time is accurate. I recall seeing a video somewhere of Dr Ishigaki’s that had the time stamp on it from take of the fly to ejection of the fly.

And I have other videos filmed underwater of trout holding in water taking what ever drifted by them. Swallowing some items, and spitting out others, and it was very quick.

One surprise was they would often take in bits of moss or other green vegetation that drifted by that they ejected quickly. The mystery was did they take it because they mistook it for some insect or did they take it because sometimes there is something attached to it that they would sometimes swallow. The questions were - would a fly that looked like a small piece of moss be an effective fly? Are we wrong that that fish will only take what looks like some of worm or insect? Their repeated taking of vegetation suggested perhaps they frequently find some type of protein hidden in drifting vegetation, and sample it. They seem to either somehow quickly swallow what is hidden inside and eject the rest. Or only eject the pieces that did not have hidden inside what they were looking for.

I think it was in one of the DT videos with either Go Ishii or Ajari where they commented they have seen fish follow a fly and bump it with their nose, before either turning away or deciding to take it into their mouth. They appeared to sometimes first make some judgment about whether it was food or not by bumping it. Who knows - maybe they sensed something about it’s texture or movement when bumped to make a decision about it.

I remember one of the early marketing arguments for cdc was the possibility of creating softer dry flies so that the fish kept it in its mouth longer.
Same with soft plastic lures for spinning.
I believe that it has its good points.
It’s probably also a matter of what ‘mood’ the fish is in.