A New Hook For My Foam Spider Pattern - Gamakatsu C15-BV

I have recently changed to the above mentioned C15-BV Hook for tying my Well-Hung Foam Spider Patterns, because the Vertical Eye and Barbless design is most helpful in releasing fish and tying on Parachute hackle flies without crushing the hackle: With the vertical eye, you just turn the fly on its side and stab the tippet through the eye hole under the hackle, and tie the tippet knot there as well - quick and easy.

For a view of the hook and some Kebari tied on it, Please see the following:

Tenkara on the Fly

I believe it’s interesting how much the colors of the materials the fly was tied with changed when viewed against the 3 different colored back grounds the photos were shot under compared to what we see in the air above the water. The fish get a very different view than the one we get.

After TUSA was sold, the forum went away and all the links to articles that appeared there (Here as well) have also been Lost. Fortunately, I have other access to some of that material, so I’m putting up the Materials List and Tying Sequence for the Well-Hung Foam Spider Pattern as follows:

HACKLE: Gray Partridge, with half of the fibers stripped off the inside curve, tied in tip first, then wrapped around the foam tie in point 1.5 to 2 times.

THE FOAM SPIDER: The Well-Hung Foam Spider is as close to a One-Fly Pattern as I’m going to get. I’ve been fishing it a lot stream fishing for 3 years now, but it also works well on stillwaters, but not as consistently as the ant and beetle patterns do on lakes. This pattern has been in development for more than 20 years now, here’s the Tying Instructions:

Karl, can you add a photo? 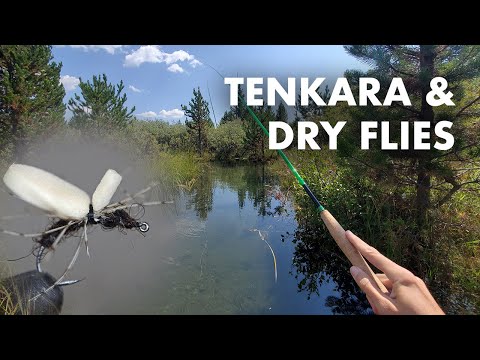