We had to put two 12 and 14 year old purebred and lab mix rescues down in 2019 and 2020 respectively. Over the years I was able to take (only) one of them at a time fishing with me. It was very painful to lose them. Now a younger Lab-Shep mix rescue “Sprocket”; the latest in a series of five rescue Lab-Lab mixes over a 38 year period who was left “intact”, always kept outside, never trained, and finally abandoned without water or food for ten days when his “owner” went into the hospital, is now peacefully snoozing on a big comfortable bed five feet away from me. We’ve got another often naughty but wonderful loving companion. 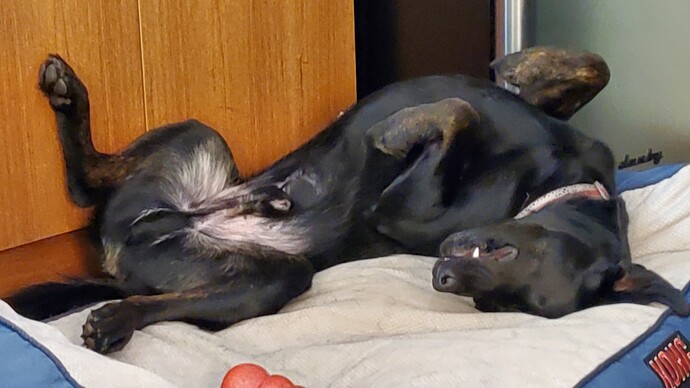 I’d been sick in July; pneumonia from inhaling fungus or bacteria when cutting down and limbing wild hazelnut and cherry trees on the property. After I recovered we replaced our fence and I had a lot of cleanup to do. Then Mrs Brian went out of town for 3 weeks on an urgent family matter. I continued the work around the property. But yesterday I needed to get out and catch some fish. Unfortunately after 8 mos “Sprocket”, probably due to his previous owner’s neglect, doesn’t like being outside for extended periods even with a big fenced wooded lot and a nice dog house that has a comfy bed. Plus he loves enthusiastically greeting other people (bothering them). The biggest problem with taking him along is he isn’t fully “emergency recall” trained. He does OK with long lead training but take the lead off and he still “lives in the moment” keying on what he sees and smells. All this means I couldn’t just leave him at home, and had to go somewhere remote, and lonely. So I took him to a “Curtis Creek” that is at the end of a dead-end logging road. I have fished it for over 20 years and have rarely seen anyone else, and never anyone fishing. The upper reaches where there was an easy access point has many-many trees down over the stream after severe snow runoff several years ago so I now bushwhack down into the steep ravine a ways downstream.

I put a doggie backpack on him so he could carry some food, a dish, leash, etc… I kept him on a long lead until we got to the stream. I unsnapped the lead and put it in the cargo pocket of my trousers. He took a long drink from the stream then began wandering off following his nose while I took temps, rigged up my T-rod, and kept one eye on him. Air temp was 76°. The water temp was 62° in the sun, and 58° in the shade. When he was about 100’ away I blew the whistle on my sling packstrap. He quickly stopped and looked back at me. I said “Treat?”. He immediately ran back and got some chicken jerky and a heartfelt “Good Boy!!” as a reward. That set the tone for the day; he was almost always in sight and I never really had a problem with “come”. The backpack seemed to work like the training lead signaling “I’m working”. He also wasn’t getting in my way, or wandering through any water I was trying to fish. 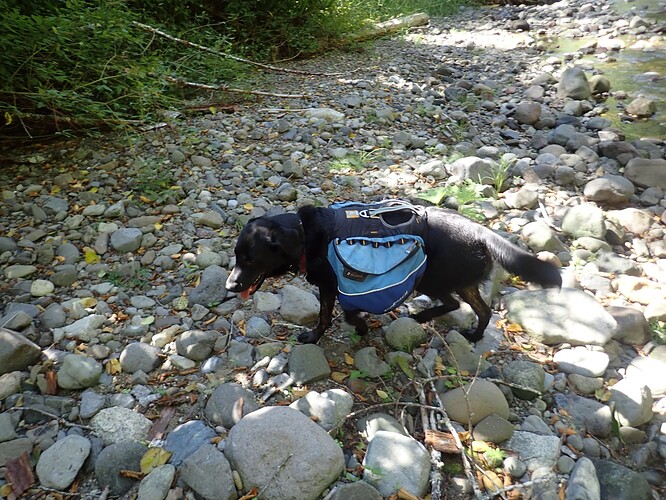 This was the first little run-pool I fished that is almost narrow enough to jump across. 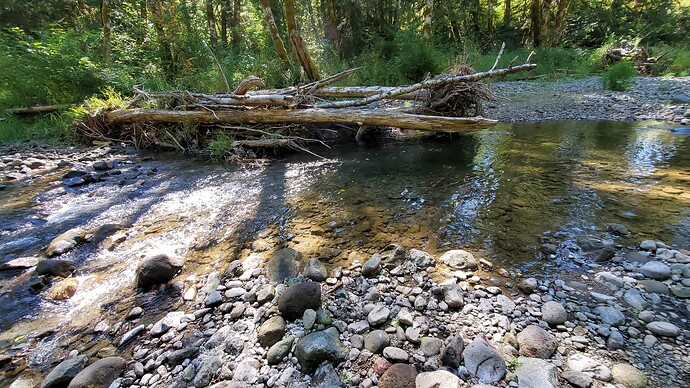 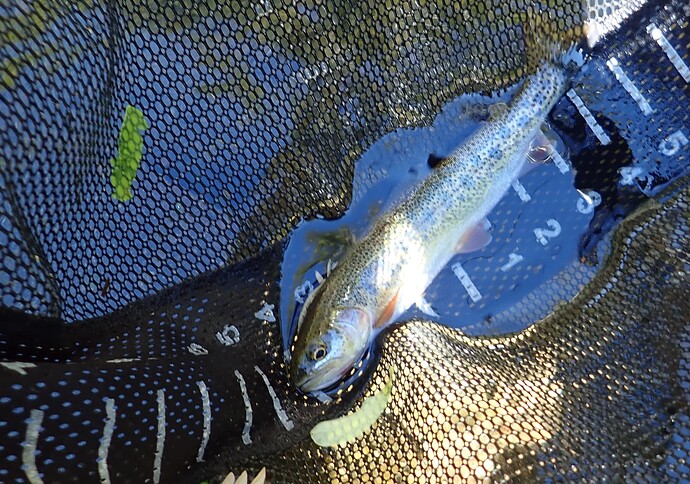 Sprocket was about 30’ downstream on the bank and was oblivious to the splashing in front of me. I called him and he came over. I pointed to the net and he took a look at the fully submerged fish. 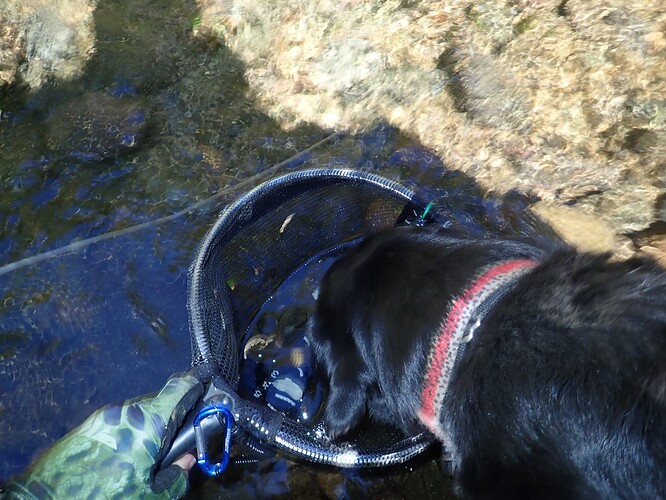 He reacted with a “meh”, and walked back down the bank to investigate some elk droppings. I fished for two hours and landed half a dozen fish.

“Rescues” are such a dichotomy. Early on we struggle with their behavior, and spend endless hours trying to train the feral out of them. For sooo long there will be many @&^$* then suddenly a “bright spot”; maybe a breakthrough-highpoint, then more @&^$* . We learn how to work with their unrefinement and see results we’re hoping for. At some point we both mellow and learn to live together in a state of equilibrium.

But all this time they are so grateful we’ve given them a home where they feel safe, and they’re no longer having pangs of hunger for days. We spend time with them, show them affection, and they love us so much for it; we see their gratefulness and devotion to us in their eyes . The years go by, and they slow down. We go on slower, shorter, walks and they follow us around the home because they just want to be near us. We can tell they’re in pain but they never let out a whimper. I wish I was that tough.