Two Daiwa rods on the stream after work

More suburban runoff ditch action here in Alabama.
I have to thank Troutrageous for the Coleman Can Cooler/sling idea, I’ve been using it lately and it’s awesome for short excursions not far from the car. 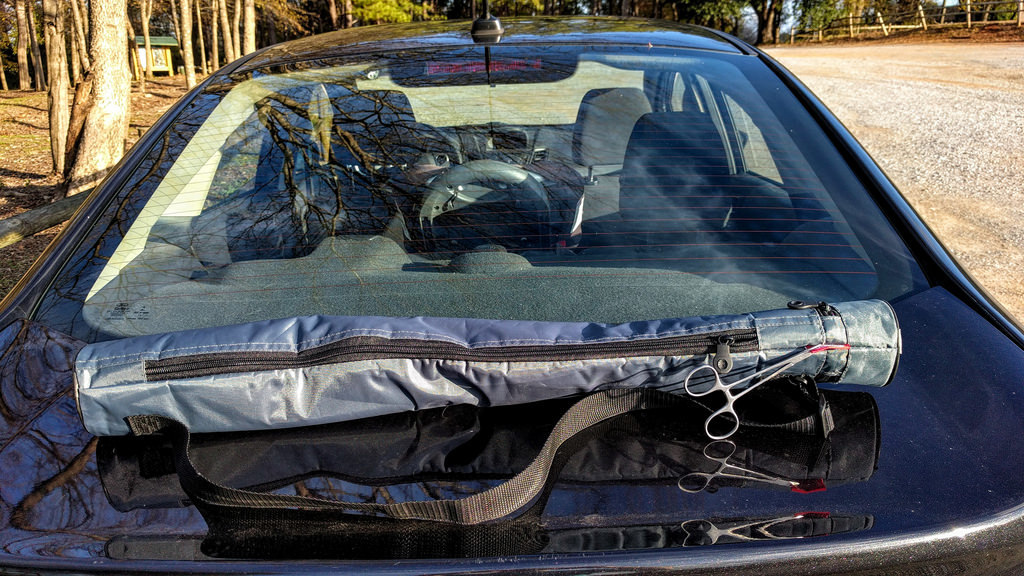 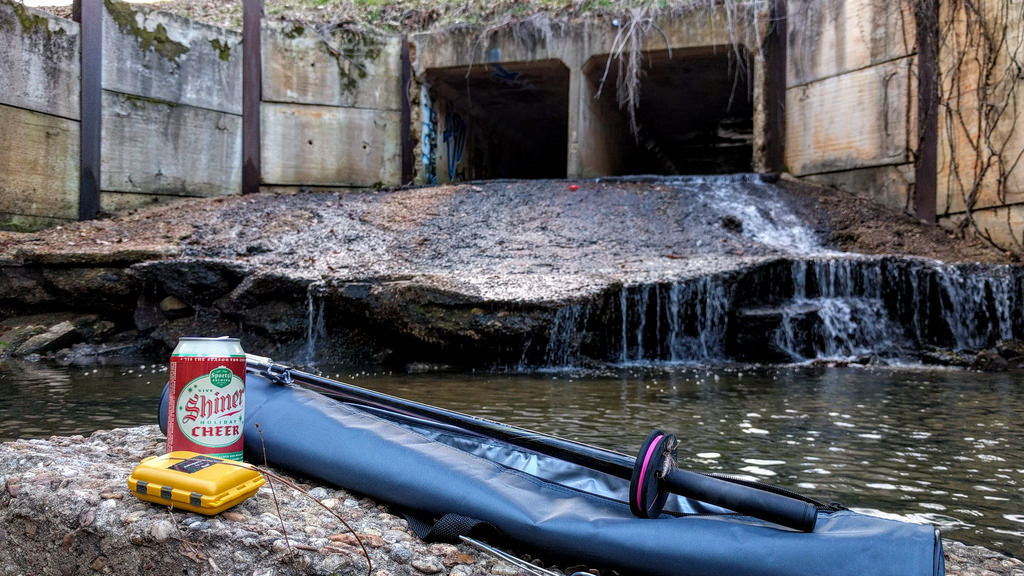 First I actually went a little further downstream and was fishing with the Soyokaze 27. Love this little rod. I was throwing a little kebari and caught several little sunfish, like in the 3-4" range. Was basically yanking them out of the water.
Then I moved back upstream to the first main pool, under the bridge that leads from the parking area to the “nature trail” which follows the “stream”.
Here, I used my giant (#6) killer kebari, which was the second fly I tied. I have already caught both bass and trout on it, it’s an incredibly successful fly for me.
While I was rigging up, I couldn’t see any fish at all in the pool around me. A few days ago we had 3 days of freezing weather, but today we’re back into the 70’s. I wasn’t sure what to expect.
First cast, I had at least half a dozen sunfish come blasting out from under the rocks and fighting over the fly. YOINK! 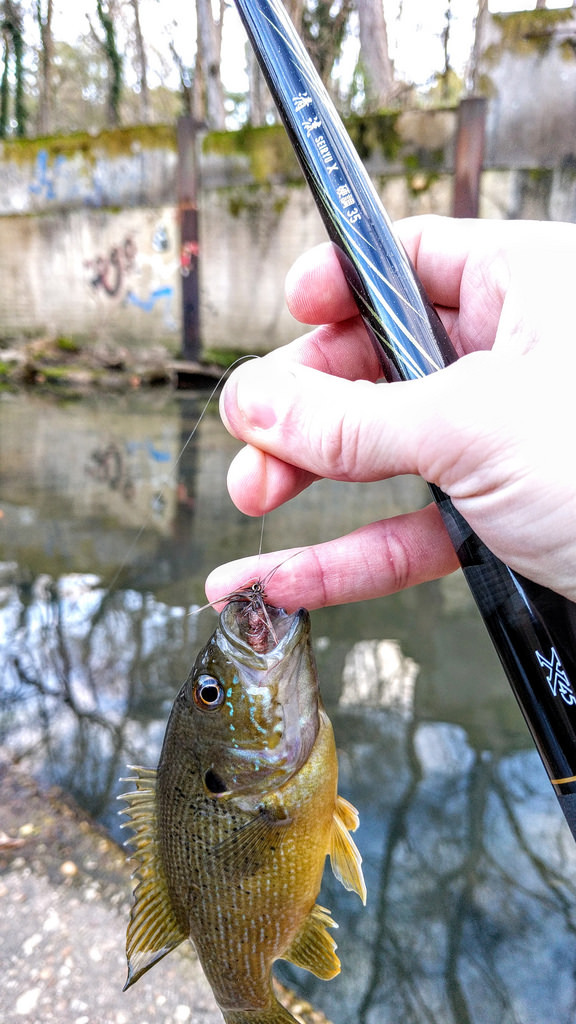 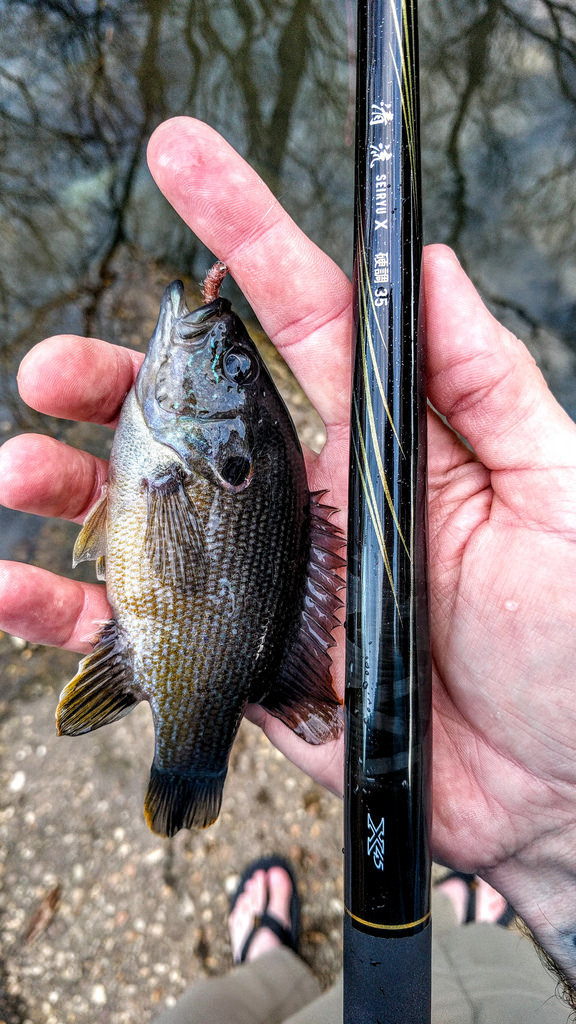 Really amazed how much bend these little guys put in the Seiryu-X 35. This rod throws a KB so damn well. I’m using 2.5 Oni LL and 6X.

Good to see you here already. I’ve been throwing same thing with same line combo with my new 45. I like the way the rod casts, very accurate and the reach is super nice. Its a bit heavier than my Sagiri 45 however and I could feel it in my shoulder after half an hour of practice. Probably as much to do with poor technique as with the weight. The rod definitely has more backbone than the Sagiri. Can’t wait to get a chance to land a fish with it. For now it’s just practice to get use to it.

Interesting to hear what you say about the weight of the Seiryu X, Martin. On the Daiwa website, they say that the Sagiri 45 weighs 68g and that the Seiryu X weighs 69g (near the bottom of both pages). I wonder what the differences is in the rods that makes it feel heavier?

Both rods have 9 sections. The collapsed and extended lengths are nearly identical and the rod diameters are nearly so too.

Chris the pictures of your sunfish always remind me of fishing as a kid with my grandfather in the Upper Midwest, they’re great. Maybe it’s just memories from being a kid, but I always swore the fish were 5x bigger than the ones in your pictures.

Ha! Glad the can tube cooler is working out for you!

Looks like a neat little spot. I used to have a similar one when I lived in Pennsylvania at the base of a larger reservoir. Loved fishing for sunnies, rock bass, and the occasional dink LMB.

May be blasphemy, I’m not a Killer Bug guy, but looks like you’ve found a really sweet combination.

Peder, your memory is probably accurate, most of the fish I catch are T I N Y haha.

Mike, I go through phases with killer bugs.