I’m in the very early stages of pre-planning for a 3-5 day backcountry backpacking/fishing trip…in other words, I’m trying to pick a location. I figured I could solicit some ideas and help my own planning, but also give others an idea of dream locations for a backcountry trip.

Personally, I’m looking for 3-5 days, with 6-10 miles of hiking each day and a few hours of fishing. I’m not opposed to base camping for a night or two, but definitely want to move around quite a bit. Some ideas I’ve had:

As you can see, I’m all over the place. I’d love any suggestions/ideas anyone has. Certainly not asking anyone to “hot spot” their favorite secret stream, though!

Hmmm, I’ll have to think about that.

It also depends on how big of a river or stream you want to fish. Depends on what kind of stream/river, as well as the surrounding environment.

Kern River is a tough place to fish, especially if you don’t know “the spots”. It also depends on when during the year you are planning to go and specifically where. Much of it is limited to miserable fishing. I used to live and work near there and after four years was only just starting to know where I could spend the day fishing and actually get something.

In theory, I’m open to everything. Location will be chosen first, time of year will be then picked to find optimal conditions.

I prefer small(er) streams, and since I’ll be backpacking I’d definitely be interested in a place where I could hit multiple streams, or multiple sections of the same river/stream over the course of a week. Not looking to drive all over though…one parking spot, foot power to get everywhere else!

Kern is certainly beautiful; but, at least in my opinion, it doesn’t exactly fit those descriptions. Although, depends on where along the Kern you intend to fish - it’s a long river.

Haven’t done any real research on the Kern…I saw a couple trip reports about the Upper Kern that looked fantastic though.

Yes, that’s certainly the best place to go - no questions asked. There are “some” fish in the Lower, if you get what I mean.

I’ve hit the upper Kern in SEKI, some of the best fishing I’ve done and what started my obsession with Tenkara. Also probably one of my favourite backpacking destinations. I can suggest some nice loops out of Roads End, Mineral King or the East Side of the Sierra. I’ve done several long trips there and have covered a significant amount of trail and off trail terrain. The lake fishing is really outstanding in the Sierras. It worked with Tenkara, but if you are not into lake fishing with a fixed line rod you’ll be missing out on what the range offers best IMO. I’d suggest lurking/researching in the Fishing section of http://www.highsierratopix.com and asking some questions. Really deep body of knowledge there and usually up to date as to closures, conditions and issues. Worth hanging out there if planning a Sierra Trip.

I’ve fished Yellowstone, never backpacked and never at optimal time. Always very early season or very late. With the closure they had this past season I would be weary of planning a trip there until I knew what to expect. On the other hand the Sierra are experiencing a huge snow year, so I would not plan to head out there until August this summer.

I’m leaning heavily towards Yellowstone at this point, with the Smokies as a fall back option. I’ve only spent one day driving around Yellowstone and have ever since wanted to go back for a backpack, even before I started fishing. Planning for 4 - 6 days in the park, fishing as many smaller streams as possible in the backcountry.

Don’t fish Specimen Creek in West Yellowstone. My brother and I were in Bozeman last September and we made a foray into W. Yellowstone specifically to fish Specimen because of the likelihood of catching some west slope cutthroats. The creek looked amazing, clear water, excellent flow, abundant food and extremely scenic. We searched pool after pool and even walked through some but we didn’t scare any fish! We spooked one fish 1/4 mile from the trailhead but that was the only one we saw. We hiked about a mile and half upstream and called it quits. We did hit the Gallatin on the way out. The Gallatin headwaters are pretty and they flow from W. Yellowstone. 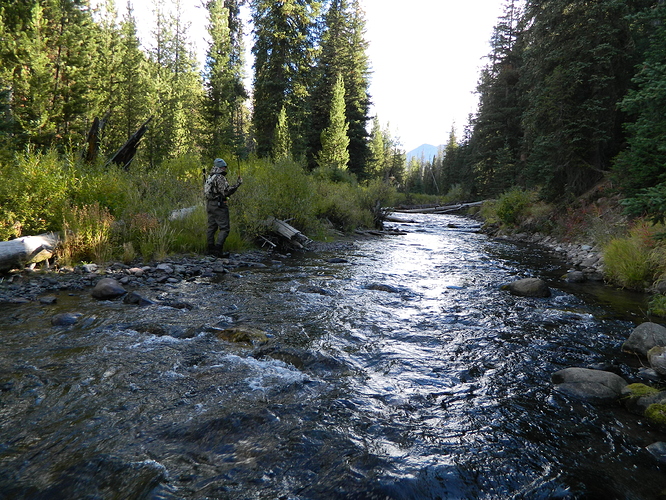 Last Sep, I was able to fish several areas in north NM but I will be returning to the Pecos wilderness this September. I’ll be staying in a cabin along the river and fishing the main river to include the Pecos “Box” section. I’ll hike up the Mora depending on how well it’s flowing. The Mora campground is always popular with bait fisherman and the stocked rainbows, but if you hike upstream about one mile, there’s no one and plenty of browns. I also plan to backpack in to the upper reaches of the Pecos for two nights and fish the Beatty Flats area and possibly head up above Pecos Falls where the RGCT reside.

Also in September is a trip to Tom Davis’ region of southeast Idaho and the west slope of the Tetons.

Give me a heads up a few weeks before you come and I’ll take you fishing.