Where I hike and explore I usually encounter quite a few lakes of different sizes. Using tenkara gear in lakes is a lot of fun, and contrary to what many may think it’s really effective too. That’s probably no news for anyone on this forum though.
Using tenkara gear changes your perspective to the better on how to approach and view the water. At least it has for me and I thought I payed enough attention to these things before.
I also think that, in calm conditions, a thick western fly line put quite a few trout off -no matter how gentle the presentation.

Anyone else enjoying using tenkara stuff on lakes?

Occasionally I do hit lakes and ponds, but my heart is in the moving water. There are currents in lakes and ponds but minor compared to other waterways.

The majority of fixed line stuff I do is in streams in rivers, followed up by the ocean, then ponds and lakes.

The ocean stuff because of the tidal influence is nearly the same as the drifts we do in rivers. The biggest difference is identifying structure close enough to be within casting range.

I’d say 95% of my fishing is done in creeks and rivers, but I’m really enjoying the other 5% too.
Brown trout streams are closed in this part of Sweden from august 30th to january 1st, so that means that fishable waters are reduced to grayling streams. Which is fine, but I happen to have small forest lakes with nice wild brookies (americans introduced in the 50’s) in them and it’s a lot of fun.
I also swing by some stocked lakes at times when I don’t have a 2-hour hike in me.

I’m almost always on moving water, but I usually give it a shot when I come across a pond or lake. Unfortunately, I’ve had almost no luck on still water.

Most recently I was hiking with my family and found a small lake in a forest. Perch were clearly visible just below the surface. However, the only way I could get them to strike was to pop a kebari right on top of them — basically, I had to hit the fish with it.

Maybe I haven’t spent enough time trying to understand still water, but without a current, I’m not having much luck. Any advice? Favorite techniques?

Approaching a lake with a tenkara rod can feel a little limiting. But it’s important to be confident in the fact that the shoreline is the most productive place in a lake. Trout will search the shores because that’s where most of their food will be. Choose the side of the lake where the wind is blowing. Keep a low profile, just like you would in a small stream.
Fish deliberately, aim at weed or other structures.
Trout love lily pads and such.
Once you get some success, and you will, you’ll look at a still water differently, and focus on what’s happening within 10-15 yards from you. The feeling of being limited will go away.

I fish the local canal quite regularly with my Shimotsuke Kiyotaki 360 . There are no trout in it, mainly perch, roach, bream, bleak and pike.
There is a small branch canal running off it, which is relatively shallow. Here I have caught perch, usually on a gold beadhead pheasant tail nymph.
However the main canal is a different proposition altogether. For a start it is mostly 16’ deep with the sides having a ‘drop off’ from 5’ down to 16’ which is where I concentrate. The canal is also very wide. It is 16 miles long. It can also be very windy.

To date I have struggled but it has become a fixation with me and I am determined to ‘crack it’ with the tenkara rod, or should I say, fixed line rod, as it is about as far from tenkara as you can be. I know there are plenty of fish in it, as I have caught them with my spinning rod on jig flies, soft plastics & spinners.

With the cooler weather here in the UK I am about to tackle it with a vengeance and hope in the not too distant future report on a few ‘many’ sessions! Watch this space. 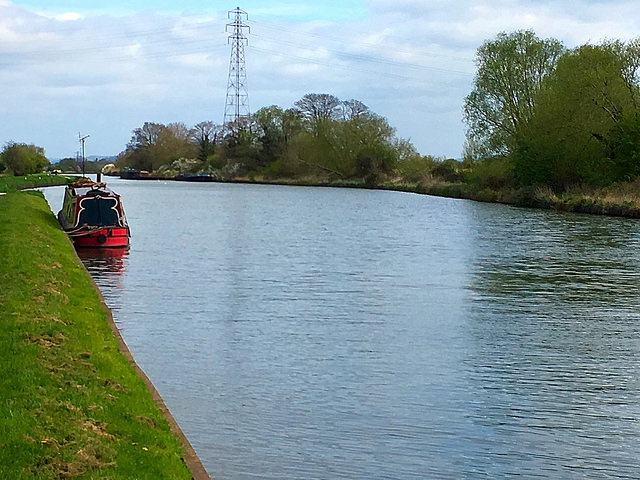 Cool!
A challenge is always fun. Looking forward to see how you get on.

It is a very interesting

I think that Stillwater fishing is a place of study such as casting, line and kebari

Selection of my kebari 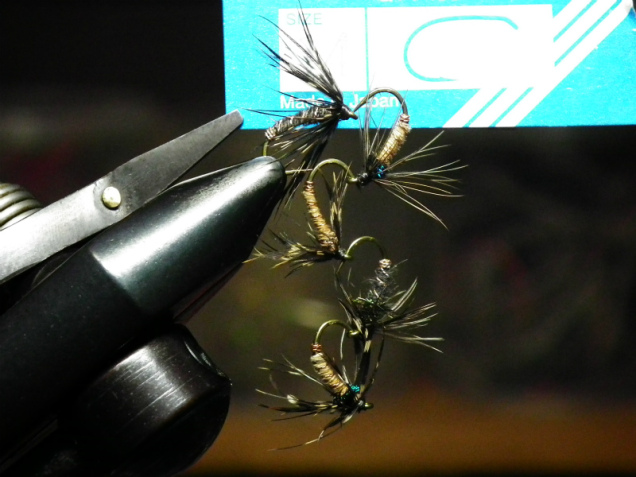 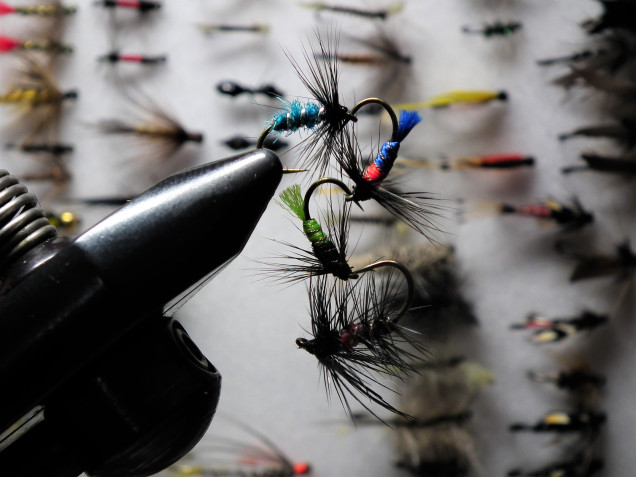 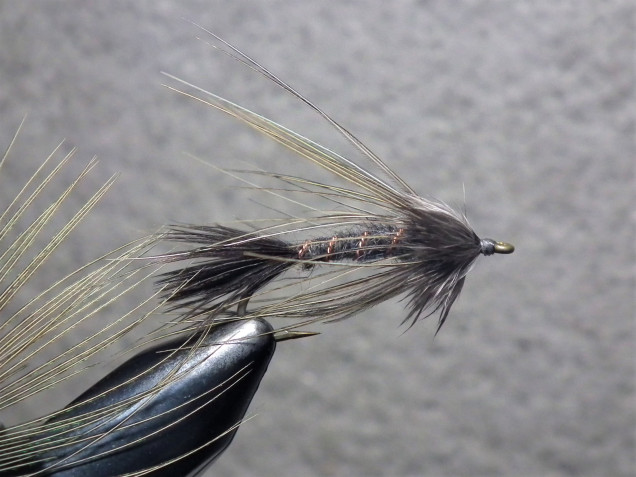 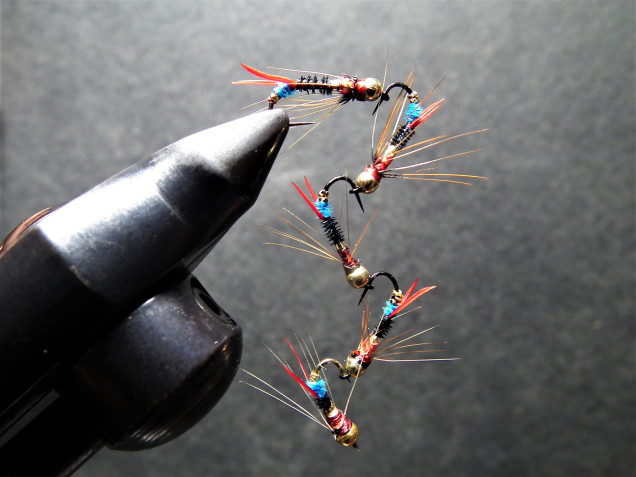 The wind will help you

Thank you for the examples of your flies. I am particularly interested in the last two photos, especially this one

May I have details of the materials used please.

May I have details of the materials used please.

In my case it is all Japanese pheasant 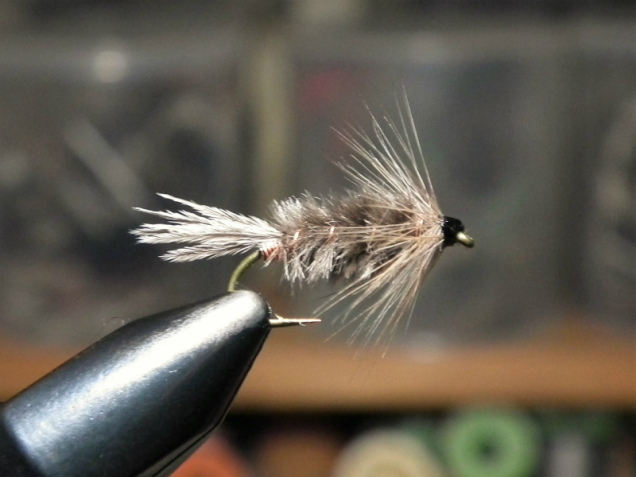 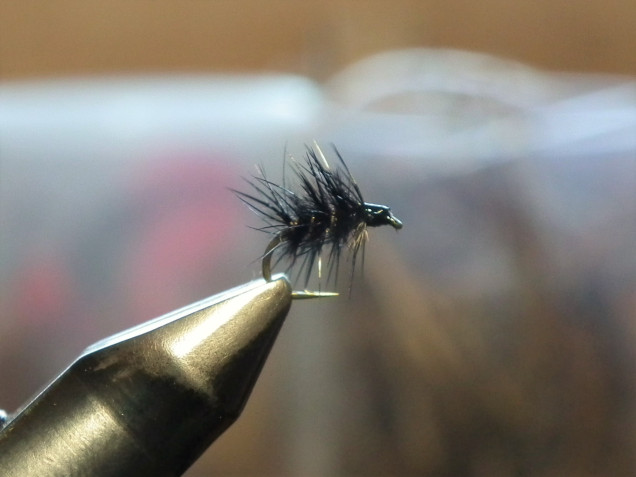 Thank you everyone for your contributions and thoughts about flies.
Personally, I use the same stuff as in streams, I don’t fish still waters enough to use flies specifically for those situations. Large brook trout, which is my main target tends to love a quite big, red sakasa kebari.

Large brook trout, which is my main target tends to love a quite big, red sakasa kebari.

It is very interesting
Thank you for teaching me

It should be me thanking you, your replies are very informative.
I hope to hike in to one of the lakes this week and gather some photos and maybe do a little bit of (poor) filming.

I am looking forward to it
Good fishing

My first experience with tenkara fly fishing was on a bass/bluegill pond. Here, the trout season runs between the last Saturday in April through the 15th of November. We have a seasonal cycle in the mountains I fish - Snow runoff on the streams begins in the Spring, good fishing conditions and water levels flow though the summer months on streams, with very low water conditions and difficult fishing conditions prevailing in the Fall. When the streams fish poorly, the lakes usually are fishing at their best.

For both lakes and steams, Thermal Up-Draft winds are nearly an everyday fact of life in the mountains. The streams are mostly infertile Free Stone Streams. And like wise the lakes are also acidic, and lacking in plant growth and abundant insect populations. The daily thermal Blow-In-Winds provide the bulk of the trout’s food in the form of Terrestrial Insects - ants, beetles, hoppers and such - for both the lakes and streams.

Mountain climbers climb mountains because they are there. I fish lakes for much the same reason but, there is a little more to it than just that. Around here the lakes produce bigger, stronger, and more challenging fish to catch than the streams do. In still waters, the trout have an unlimited amount of time to decide whether to take your fly or reject it, where stream fish must make a quick decision or go without, so patterns and presentations have to be more to the trout’s liking in still water environments than they need to be in streams.

In streams the trout hold in places where the flowing water brings their food to them. In lakes, the fish constantly move in search of their meals. Once you learn the kinds of places that trout hold in streams, you can prettily easily pick the pockets and catch the fish. In still waters it is Spot-And-Stalk-Fishing game, where the angler has to find the fish, see the fish a head of time, determine its line of travel, lead it with his cast allowing enough distance for the fly to land on the water with out spooking the fish, float there and or to sink to near the trout’s eye level, and then move the fly in a life-like manor to get a strike. Flowing streams automatically provide all the motion the angler and the trout need. For both kinds of angling, the fisherman’s most valuable tool is a good pair of quality made Polarized Sunglasses.

Generally speaking still water is thought of as having no current, but as was mentioned above the best place to fish in lakes is along the windward shore, where all those terrestrial insects that the wind delivers tend to accumulate, and the trout cruise looking to pick them off near shore and in the splash-back zone from wave action. Because nearly all furled and level T-lines sink, a Floating PVC coated T-line with a tapered slow sinking leader butt is the best tool to use for casting into the wind and getting the drag free drifts the trout will respond positively to, because the sinking lines causes any fly you present with it to drag, putting the fish off most of the time.

When I started tenkara fly fishing, I carried both Western and Tenkara gear for fishing the high lakes because I was concerned that tenkara lacked the casting distance needed to succeed on the lakes, which proved to be a false impression. For sure stealth on the lakes is even more important than it is for stream fishing, where the flowing waters provide much more cover for the angler than lakes provide. But the longer rod length of tenkara style rods gives the angler some of this distance back. And it allows the angler to present and fish his fly parallel to sedge reeds growing out in the water along the shore of some lakes much better than can be done with a Western fly rod. But lakes with timber growing right up to the water line are troublesome in that it can be very hard to lay your rod back far enough to get a hold of your line to land your fish, so always pick your casting locations with your fish landing strategies in mind.

I now catch just as many (and probably more) fish with fixed line tackle as I did before with my Western fly rod and reel tackle. But more importantly, to me at least, is that I enjoy the direct contact and feeling I get from catching tenkara fish so much more than I ever did with my Western fly fishing gear.