Many of you are probably familiar with my interesting 390. I borrowed the rod from Chris Stewart (was part of his personal stash), and broke the grip section on the river. Well, it broke my fall at least.
The grip is “splinted” with a plastic tube and gaffers tape. I have fished it this way for 6 months, landing panfish, bass, and trout with no problems. 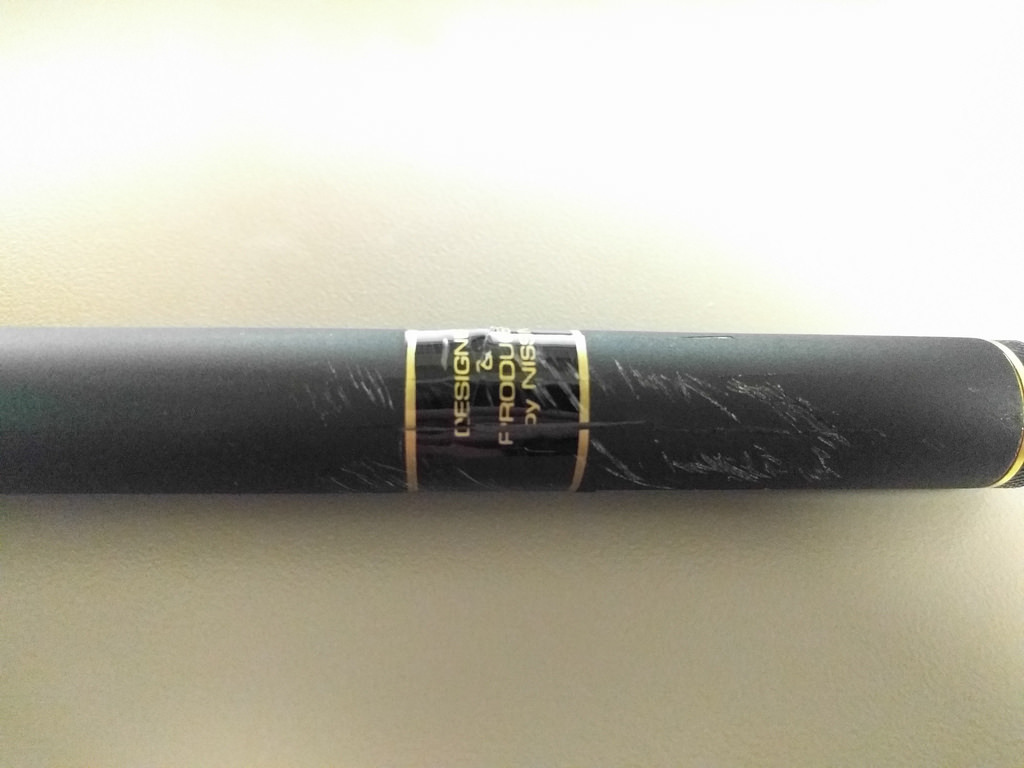 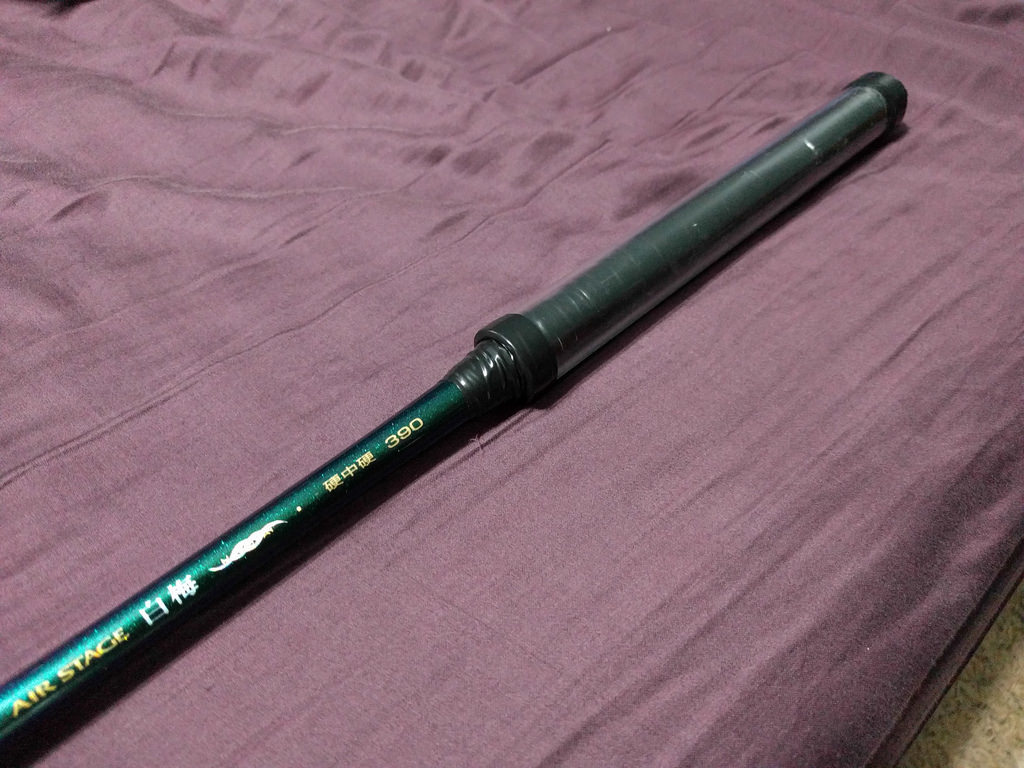 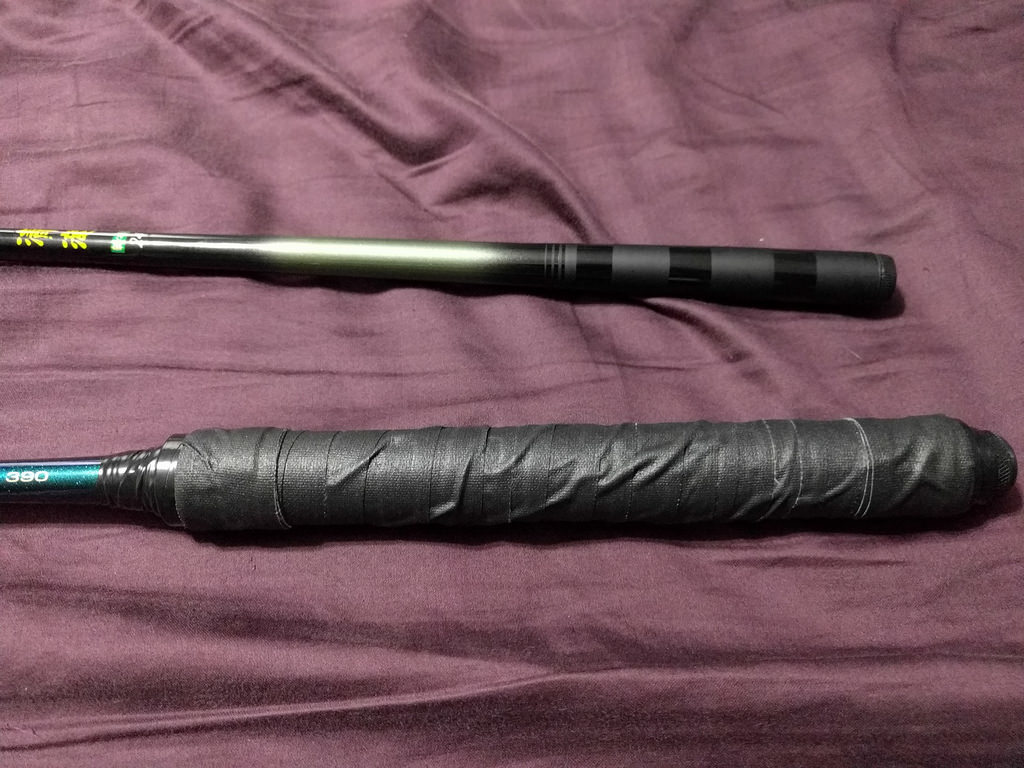 Redeye Bass! POPPER ON AN AIR STAGE! This rod will cast a tapered line and bigger fly surprisingly well, but you will feel the smallest fish on the end. It’s pretty awesome. 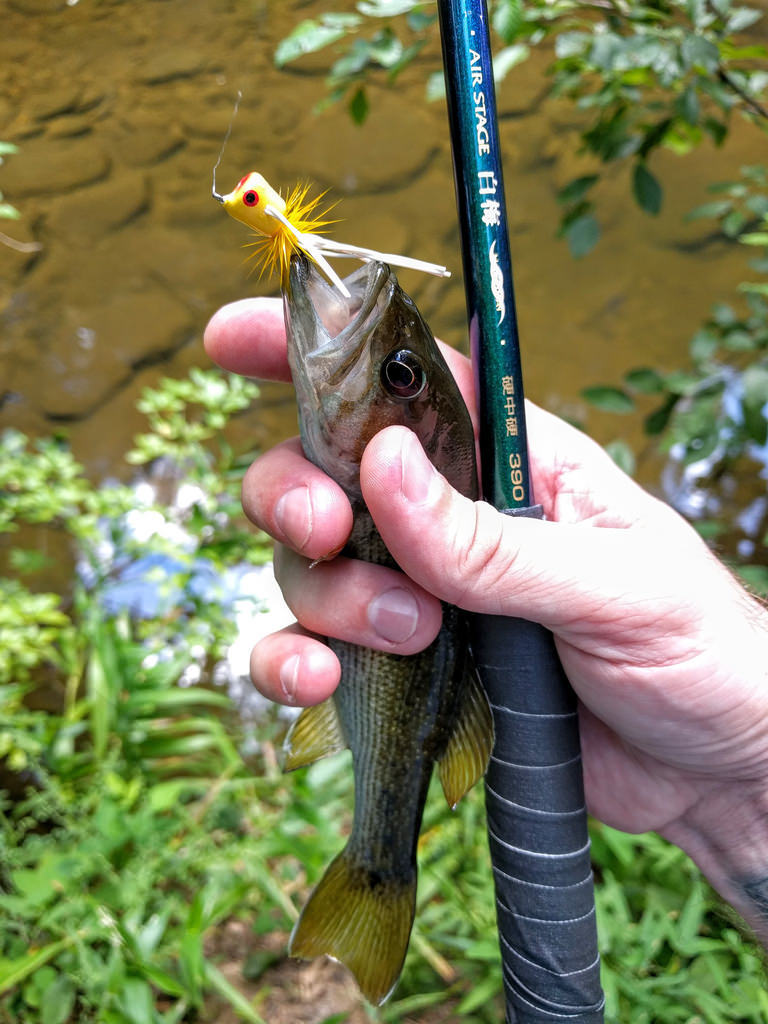 IIRC, Chris quoted me somewhere around $70 for a new grip section.
The second section up from the grip has a decent scuff on it from the fall, but not anything that I think would interfere with this rod’s capabilities, seeing as it’s a 7X rod.

My 290 I bought new from Rakuten in the summer. It has caught me a nice variety of trout and warmwater fish. Always 7X. I don’t think there is a single blemish on the clearcoat. Prob some dirt on the non-skid finish of the grip that will clean off, but that is about it.
First day I had it (15 mins after getting it in the mail) 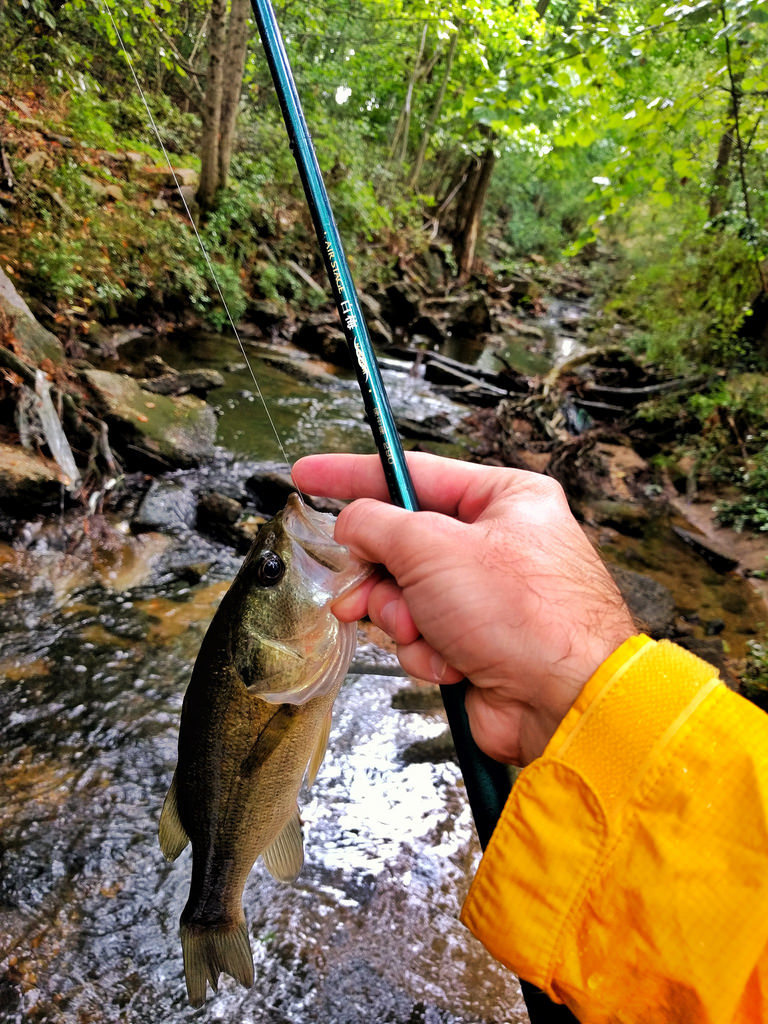 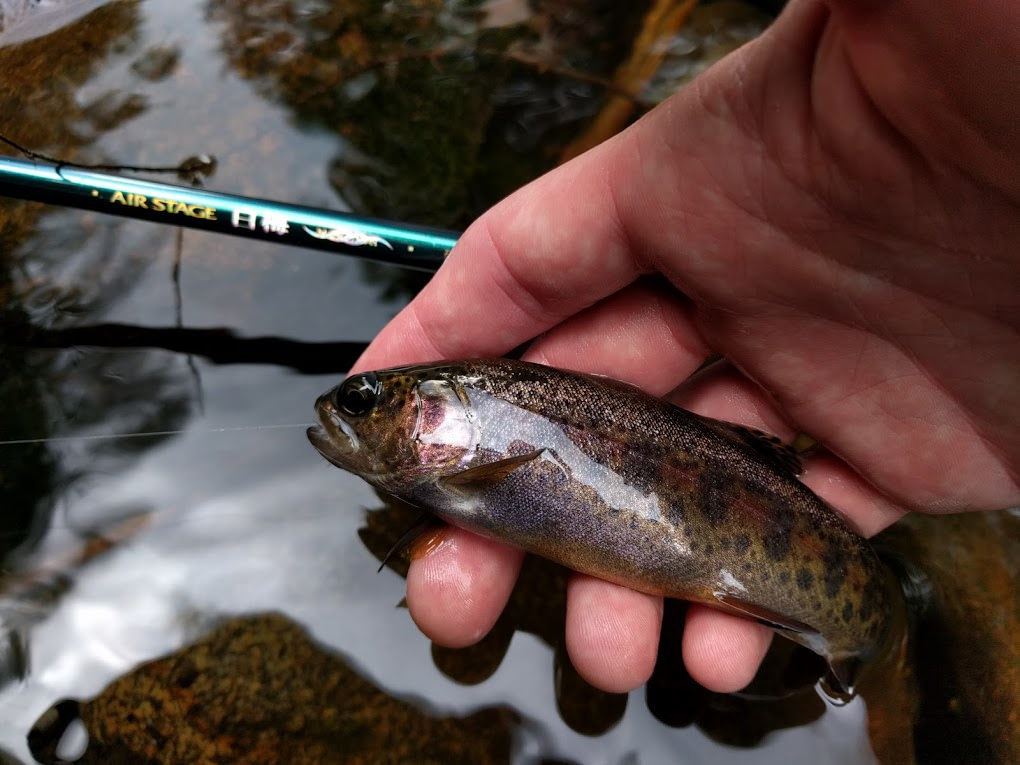 These are the 硬中硬, “Hard in hard” or “Hard in Medium Hardness”, depending on translation. What does this mean? These are the softest variant for their respective lengths in the Air Stage family. The 290 is not on Chris’ Common Cents scale, but I would estimate it around 7. The 390 is an 11 on his scale. An 11 penny 3.9m rod.
The 290 is just magical with the Fujino White Tenkara tapered line. I fish it almost exclusively with this line- mine is the 3m line. Small dries, kebari, and small nymphs.

WHY AM I SELLING?
Truth be told, a good portion of the reason is that I just don’t want to fiddle with 7X anymore. I’m right handed, and here I am 6-months post “fall in the river”- my index finger on right hand still does not work right. Dr says prob never will be “normal” but will get better. 7X is very difficult for me to tie these days, and i get very frustrated quickly with it.
The 390, for the fish I would target with it, is simply too long for the places I will target those fish, at least most of the time. I really have to find places to use it. I have therefore not been motivated to “fix” it.
The 290 is awesome, but with some recent aquisitions I think I prefer 270 as my general purpose “small stream” rod, then maybe something really tiny (180?) for even smaller.
Basically a combination of factors led me down this path.

I will entertain offers of trade for a big fish rod- something that can handle a 20"+ trout, large bass, or carp. 450ZX, Daiwa 42MF, Kiyose 42SF, Keiryu-X, etc. Single-hand big fish.

290 I would like $110, including shipping and paypal. I have the box and papers, both original caps. Can include the Fujino White Tenkara 3m line if interested (FREE BONUS! OOOOOH)
390 because of it’s state of disrepair, I am asking $35. No included bonuses lol.
Together, $125.
Two interesting 7X seiryu rods that will have you covered from tiny headwaters fish to medium sized medium to large water. The 390 is surprisingly powerful when you have the room to work it.

That is a bummer about your hand.

Yeah it is. Since I’m in the AF I have to just deal with our healthcare. My provider sent me to physical therapy, and the guy there is like “it’ll get mostly better, but the knuckle will always be swollen and it’ll always hurt probably. No point in surgery”.

Nice! That was quick!

I agree! Tom’s went quickly too.

Not to point out the obvious, but I’m guessing that @CM_Stewart could answer your question. And who knows, maybe @tvdavisid’s experience with the 620zx he just sold may help - although it’s just a guess.

The Daiwa Kiyose 43M is the current version. The previous version was 43MF. It is rated for 5X.

The Keiryu-X 42 is going to feel like a broomstick in comparison to the Air Stage Hakubai rods, but just about EVERY rod capable of consistently landing 20+" fish is going to, unless you want to start exploring 5.4 and 6.3m rods, where the rod’s own inertia will make it “bendy” (technical term) when you cast it. Still, of all the rods you have mentioned, this is the stiffest.

The tippet rating of the Nissin 450ZX depends on the model. The 中硬 carries the same tippet limitation as the Air Stage Hakubai. The 硬中硬 is rated for 6X and the 硬調 is rated for 5X. The 硬調 is barely a one-hander, though, and really only at the shorter 4m setting. I would recommend the 43M - it is an easy one handed that has proven itself on large trout and on carp. It is definitely not a broomstick.

Thanks @CM_Stewart, that is the knowledge I was looking for.
I’m not looking for a rod remotely similar to the air stage. Looking for something that won’t suffer the same fate as my Sakon if I hook into another big fish.

Yes the zx rods are rated to be 6X, but remember because the length of the rod is so long it can absorb a tremendous amount of force by the fish. Remember that 6X will catch more fish than 4X because it’s harder for the fish to see and it doesn’t affect the fly as much. 6X allows nymphs to get deeper than 4X. That said, I often used 5X with my 620 zx and I did just fine on large carp.

Thank you @tvdavisid for that info. The 450ZX had been very interesting to me due to cost and the specs on paper sounding very nice. I like the two lengths it would give me, and I like the sound of its bend profile in a writeup I read either on your site or @CM_Stewart’s…
6X is, for me, a bit easier to work with than 7X, and I don’t think i’ve ever had 6X slip out of the knot unlike 7X… SO this brings the 450ZX Medium back into the fray.

Bought 450ZX med from Roger Hall, who was the same kind soul that sold me his Soyokaze.

Chris. I’m sorry to hear about your finger. I have trouble with knots too. I find that a fine point hemostat with a scissor blade is really useful. I use the hemostat to grab and feed the line end to tie my knots. Then same tool to trim. It really helps for those of us with less dexterity. I always use what Daniel demonstrated as the Ishigaki one knot. Using my hemostat trick I can tie very quickly and easily even with gloves on.