April showers bring high water.
In my case…high and stained water…and not good for my fishing ego.
It was opening weekend for me. I was surprised on how few people were on the water.
Perhaps they got the memo…rain and high stained water is challenging to fish.

This year had me reflecting on the stocked water I fish. In the shadow of NYC, much of this water is heavily pressured and not by any means pristine. Most of the water is dotted with residential and industrial structures…which means pollution. A lot of the wider rivers even have water treatment plants that are notorious of purging into the rivers during heavy rains. MMMMmmmmm…nasty.

Sometimes it is just not worth it to just get the fishing fix. For those of you who live near untouched and wild water…I envy you. Most of the wild water I live near…is well over an hour away.

Back to the fishing. I landed a couple fish but they do not feel much like a reward. The rivers I fish get heavily stocked. A couple beats away from being trout parks. One recently had over a thousand fish dumped. You would think I could do better than a couple of fish. What was cool , a pair of osprey have returned to the river from last year. I bet they do a number on the stocked trout. On my outing the osprey came up the river on a raid…thumping its wings…whoosh…whooosh… just over head. When it spied me it turned in went in another direction. “Wise move osprey”…I thought …“thats my stretch of river”.

G’day team, I thought I would seek the greater combined wisdom and experience of whether fishing after a period, say a day, of rain has been productive for you. If so, any more than usual or has it been not productive?

As a bit of entertainment…this is the Farmington river on opening day. Granted this is a few years ago, but the updated 2019 photo looks the same. Someone posted one on facebook…hahahaha same image…just 5 year later. Those poor trout…hahahahaha. I would be tempted to put on a wetsuit, snorkel and fins and swim down that gauntlet collecting lines as I go…give them something to talk about…singing drags…hahahahhaha…granted when the weigh me at the local tackleshop I wonder which one would claim to have hooked me first. 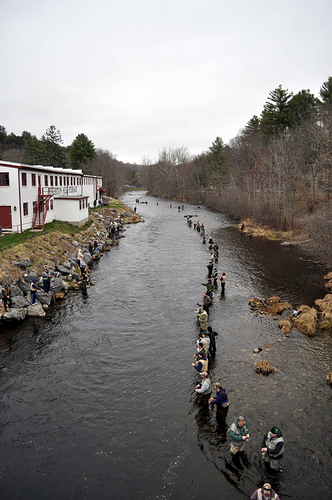 Man that’s insane, I’ve never seen anything like that before.

That looks like awful!!!
I think I would find somewhere else to fish, or not bother, perhaps tie flies instead. My image of the fishing in the USA with all her rivers, streams and lakes is most definitely not that.
I assume the ‘anglers’ and I use that word loosely, are only able to fish when their fishing spot has been ‘filled’ with fish. So sad.

I read an essay about a similar opening day in Michigan(?) with an accompanying pictorial series in a (hard core) western fly fishing forum.

Not my thing but those people came from many miles away braving treacherous icy roads in the dark well before sunup to get a good spot on the beat to cast their line when the opening whistle sounded. It’s a tradition that many families enjoy together and they were having a blast. F&G officers were on hand helping to ensure civility so everyone could have fun. Other forum members were writing in how they fondly remembered opening days like that as a kid fishing with their Dad after a long winter. i imagine that there were community organizations and churches holding pancake breakfasts, and serving hot coffee and cocoa in the parking areas.

Again not my thing, but there are many more than 10 Colors of angling.

Man that’s insane, I’ve never seen anything like that before.

hahahaha…yeah…welcome to the the Northeast…dense population…her resources can get crowded. Look up “fishing the pulaski river”. Its an atlantic salmon and steelhead fishery…fist fights break out…hahahahaha. When the striped bass fishery gets going, same stuff. Guys fighting over territory. I go the opposite direction. That said, I have experienced that kind of fishing and it has a crazy energy that can be awesome to experience. Part of the fishing culture here in the NE.

That looks like awful!!!
I think I would find somewhere else to fish, or not bother, perhaps tie flies instead. My image of the fishing in the USA with all her rivers, streams and lakes is most definitely not that.
I assume the ‘anglers’ and I use that word loosely, are only able to fish when their fishing spot has been ‘filled’ with fish. So sad.

For that reason I fish lesser know or rivers that are C&R only during those opening weekends. Once the easy meat is caught…things go back to normal and I have any river I want to myself especially at dawn. Those guys are most likely cashing in on their license fees with “easy” fishing/catching. That pic is atypical…but there are days where I have had 20 anglers on a half mile of river…even in the winter. Most guys want big fish so, they only will fish in stocked areas. Fishing the wild water offers tiny fish and most anglers dont bother.

The are very few rivers here are stocked with trout, at least on the west side of the Cascade Mountains perhaps because of the declining salmon and steelhead stocks, and the native Coastal Cutthroat have adapted pretty well above natural and man-made barriers to the salt. The big opening days were lakes but as of last year most are now year - round. It saddens me that a fairly close low elevation river that for many years was open year - round for trout has been designated for the general opener in June as of 2019. It was my favorite winter freshwater fishery because it drops and clears earlier than many other “wetside” rivers. I would have been out many times already. I emailed the district F&G bio a couple of weeks ago to find out why it was changed but haven’t gotten a response.

In May 2018 a few weeks before the general opener I landed the largest trout I’ve ever caught there on my 2nd Tenkara outing. The river had dropped and cleared from recent rains but was still pretty high and wading was sketchy so I was fishing from the bank over a likely prime lie. I had a similar bookend high water experience on a small local creek at the end of the season in October. In both cases I think the fish were aggressive in of the shoulder seasons trying to fatten up after and before winter.

Anyway, high water fishing after rains seems to be best close to the bank where the current is slower, with big colorful flies if the water is turbid and off-color.

Anyway, high water fishing after rains seems to be best close to the bank where the current is slower, with big colorful flies if the water is turbid and off-color.

https://youtu.be/PaVaHqHvCiM
How similar it is to our rivers, the season of salmon and pink salmon.

How similar it is to our rivers, the season of salmon and pink salmon.

Now that is similar to the lowland rivers and salt beaches in the estuaries here when the salmon are running. But because it depends on the run timing it is not like an “opening day”. And I’d don’t think I’d call the local salmon run gauntlets here “family friendly”.