Quick trip this weekend in either AL or GA

Weather looks nice this weekend. I have a new tent (big dumb car-camping 3 person) and some other new gear I am dying to try out.
Wife normally works kinda late on Fridays, so if we want to go all the way to GA it’ll probably have to wait until Sat morning… Hmm don’t like the sound of that.
If we stay inside AL state lines, we could head out Fri night.
I have been wanting to check out Cheaha State Park (or is it Cheaha Mountain State Park?), which is where the aforementioned mountain is located- highest point in AL. A mere 2400ft ASL hahahaha.
Anyways, one of the tent areas at the park is next to a small lake, and there appears to be a creek flowing into then out of the lake. I have fished nearby, and am willing to bet that those streams will both have redeye bass.
Redeye bass are one of my favorite species to target- they’re lovingly known here as the Alabama Brook Trout. Small, aggressive, and beautiful.

If we go to GA, we’ll likely stay kinda “close” and go check out Hickey Gap USFS campground, which is on the Western edge of the Cohutta Wilderness. It’s kinda low elevation, supposedly has trout, but I would imaging it’s about the lowest elevation that wild trout could possibly be found at, the creek is around 1600’ ASL. Supposed to be a mix of stocked (rainbows) and wild (likely just bows but possibly browns). It looks like a pretty area. I’m just not so sure about a 4hr drive for a one-nighter. It’s probably a nicer spot though.
HMMMMMMMM…
What do you guys think?

I’m biased, but I’d go for the trout.

I make the trip a few times a year to North Georgia (it’s a 5-6 hour drive from Florida) and it’s so worth it. Even though most of the trips are drive up after work, fish on Saturday, maybe a little on Sunday morning, and drive home. Feel like a different person when I get back…although it’s really hard to go to work on Monday.

Truthfully, going to find the redeyes is the more sensible option…but…ummm…trout!

You are only like an hour farther from N GA than I am… I thought you were further down/away in FL?

I’m in NE Florida (Jacksonville area).
Might as well be South Georgia…

I work in JAX and usually leave right from work, so that cuts out about 30 minutes of travel time.
Driving through Atlanta metro-area is usually the killer.

ATL is just over 2hrs for me, so that is my halfway point to “getting into the mountains”.
Man we should meet up sometime.

Was informed about Vogel State Park (GA), which looks to be a hair under 4hrs for me… There should be trout in the creek(s) there in the park, and if not there are plenty of trout streams all around. It looks like a cool spot. Might do that.
Alternatively, Cloudland Canyon State Park (GA) looks freaking awesome. No trout, but likely redeye bass and some killer scenery. Closer too, at like 3hrs.

I remember going there (and the surrounding National Forest) when we visited relatives in Rome back in the late 80’s. At least at that time, there were trout there, stocked as far as I remember. We were there just before Christmas and it was completely dead - everyone thought it was freezing cold and that we were crazy to go camping. We were fishing in jeans and sweatshirts in the balmy 48 degress! Haha, that’s what you get when you live half of your life in MN! Even VT seems warm compared to MN.

Just did living room setup dry run with the new tent, a slumberJack daybreak3. Big heavy car camping setup that was cheap.
Man I hate fiberglass (tent) poles they always feel and sound like they will explode and kill you.

Man I hate fiberglass (tent) poles they always feel and sound like they will explode and kill you.

Haha. So true! That made me think of being a kid again - that’s twice you’ve done that now. This fall I went camping with an old North Face tent that I bought back in high school. Let’s just say it saw it’s last camping trip. Either way, I forgot about how heavy and inflexible the older aluminum poles were. During the summer I borrow a friend’s tent that’s only a couple of years old - totally different.

Redeye bass are one of my favorite species to target- they’re lovingly known here as the Alabama Brook Trout. Small, aggressive, and beautiful.

Small, aggressive, and beautiful. That statement reminds me of a story Jean Santos told in an interview he did for the French Tenkara website - Tenkara Languedoc. A story about the Shokuryoushi, 職漁師, the name for the professional Tenkara fishermen in Japan. That was told by Misako Ishimura at the 2015 European Tenkara Summit.

"Since fishermen are often liars, I will not tell the story of big trout …

A little anecdote told to me: Misako told us that professional fishermen in Japan worked mainly for the innkeepers who lodged the pilgrims going to the temples lost in the mountains. These innkeepers required trout from the fishermen that were all of the same size (to avoid complaints from customers who would have been upset by seeing their table neighbor eat a larger one than theirs …) Not only should they be identical in size , They also had to be SMALL, so that customers would eat them quickly and free the space.

On this point, I think I am the perfect fisherman in tenkara: during this first season that I was able to get out was small fish!

But as you know, in Tenkara even small fish defend themselves, so I also took a lot of fun. …"

I hope Jean joins this forum. Here is a link he emailed me to the interview (in French of course)

While my French is far from fluent, the translation isn’t too bad.

Went to Vogel State Park.
The lake was not the slightest bit interesting to us.
We camped right next to wolf creek in a small section, very “headwaters”.
Just around the corner was a bridge over the creek, I caught a few small rainbows from it on a kebari i tied last week. 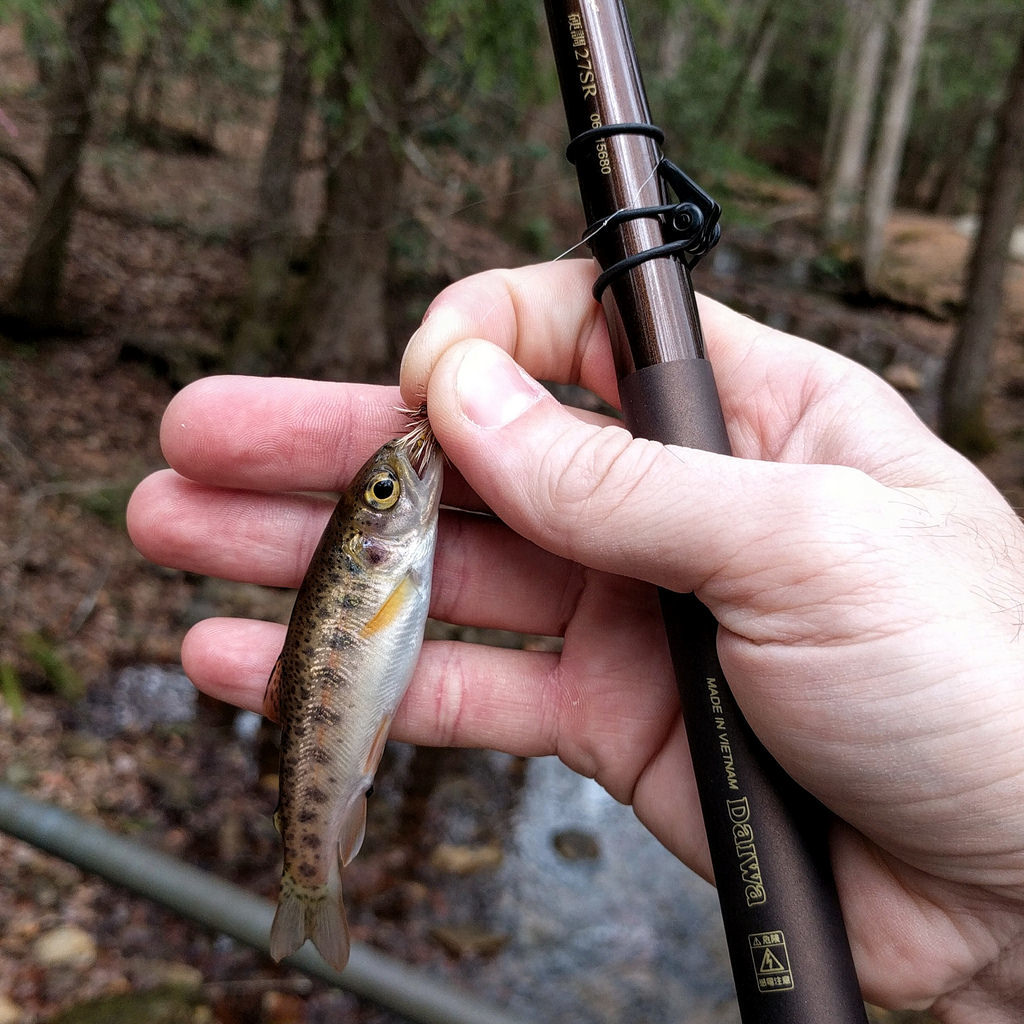 Nice. Would you consider your camping trip a success?
That’s a really pretty fish, perfectly suited for that water.

The fish were beautiful for sure. I love trout of all sizes, so long as they are wild haha.
We have found that our son really does not want to have much of anything to do with fishing. We need to find ways to keep him entertained on trips like this, so he doesn’t get all cranky.