In my opinion 10 rods is easy, with 10 you can cover 99% of the water and fish targeted with tenkara. How about 1 rod? If you could only have 1 what would you pick?

For my waters and what I enjoy doing I believe I would pick the Kurenai HM30R. For the size streams and fish that I target mostly it works very well.

Much more interesting scenario …the desert island rod… Same as you. For my home waters of Shenandoah the Suntech Kurenai HM30R is the perfect rod. It’s a close call against the Oni Type 3. 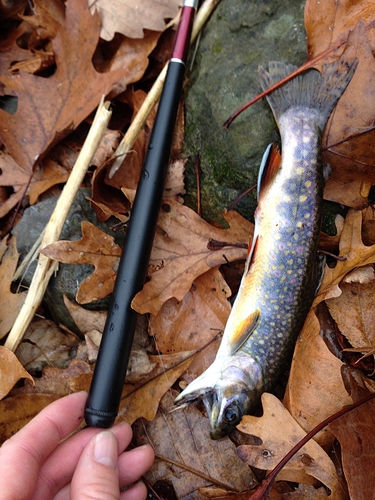 I’d definitely choose a zoom rod…both of my rods zoom and I think it’s a great feature. I think I’d choose my Rhodo over my Suntech GM Suikei Keiryu Special 39…I fish small waters of the Blue Ridge Mountains much like Martin, and I fish the short length often. I’ve also found the Rhodo to be plenty strong enough to handle bigger trout and even decent size largemouth bass, so it’s my winner.

That said, I’ve only fished my two rods and probably only ever casted with 2 or 3 others besides them.

I have only ever used half a dozen rods so far; so this doesn’t give me a huge pool to choose from. Of the ones that I currently own and have used, I would choose my Shimano LLS33.

That being said, I think (based on everything I’ve read) that the Suntech GM Suikei Keiryu 39 may become my go to rod. The thing is, it arrives tomorrow - so I’ve yet to even fish with it. On top of that, the season doesn’t begin again until April so i have to wait to try it out. I cannot even try casting it in the driveway or yard because we have sleet, freezing rain, and snow that started yesterday going through tomorrow.

have kids? sneak into the gym at their school after hours to cast a bit!

For my streams, I’d choose my Gamakatsu Multiflex Tenkara Suimu 4.0. But a close second would be my Suntech GM Suikei Keiryu Special 39.

That would be my pick if I could fish only one.

GM39 sounds awesome for sure.
Right now I’m losing my mind over my Seiryu-X. I don’t think I could fish it everywhere for everything but I love it.
A 3 or 3.2m version of this rod would probably work just about everywhere I want to fish in my area though.

It definitely would be some sort of zoom rod for sure.

my TUSA sato has been more or less my goto. It has really surprised me how strong it is.

I know that the Suntech GM Suikei Keiryu Special 39 is very similar. I have the GM 53…which I really like so far. The only thing that I wish was different about the zoom bits is how they seat. I sort of like the TUSA wedge method over the o-ring method, but it could be that I have not gotten used to it yet.

It seems to me that in a pinch the Suntech GM Suikei Keiryu Special 39, Gamakatsu MultiFlex Suimu 4.0, or Sato can really be fished from the tiniest to the largest streams and rivers. Not perfect for the extremes, but definitely functional.

I had never heard of the Gamakatsu MultiFlex Suimu 4.0…looks like a nice rod. Tom…I like the review.

You won’t regret it. I didn’t like the swivel tip. By a stroke of luck, or unluckiness, I broke the swivel off while in Montana, but, it was a perfect break. When I arrived back home I affixed new lilian to the tip and it fishes even better. No problems.

Now I have rod envy. Damn Sam, now I’m going to have to buy another rod. Sounds like an amazing rod, the Suntech 39 Mountain Special. I knew this was going to happen. :- ) Beautiful trout pics Chris and Martin

If I’m stuck with one rod, I think I would pick a zoom rod too.

Perhaps my Ito, it has done more than any one rod that I have owned and operated and it’s made by a friend.

I really like my Tenryu TA39, that is one tough and delicate Tenkara rod.

If pressed, I would grab my Ito.

The Ito is my one rod but really, there is no one rod.

My first choice would be a zoom rod because of the flexibility it offers. Like Michael Agneta, I would lean
towards the Sato or Rhodo. I know there are a lot more excellent rods out there but I have not fished them yet.
I will stick to the rods that I have some experience with catching fish.

If pressed, I would grab my Ito.

True more than ever.

I’ve sold off my fat quiver, more stuff isn’t better for me, less is, I learn more.

I’m down to a Rhodo, Sato, Amago and a Hane.

I’ve taken a few sections out of a rod and have fished that, it works. I like it better than nesting to length.

I think I could actually make an Ito work as a single rod. I would be crafting short handles for it but having 5 or less rods? Im hoping to get it to one.

I like the idea of one…but the places I fish make that concept challenging. I like your idea of making a number of handles for one rod. Perhaps a better way to go is one rod and one handle but a number of adaptors to nest in that one handle.

Lately I have been fishing some tight water. Sometimes it seems it would be nice to have a 6 or 7’ rod, but I am not about to buy another rod…hahahahhaha. Some sort of adaptor or semicircular shim might do the trick.

I don’t think I have been “into” tenkara long enough to make a choice. There are so many rods I would like to try out. But I’m a bit of a gear horder haha so choosing one may be difficult.