I want to talk about one fly and who out there does this.

The funny thing is that for striped bass there is an equivalent one pattern it is called a bucktail jig. 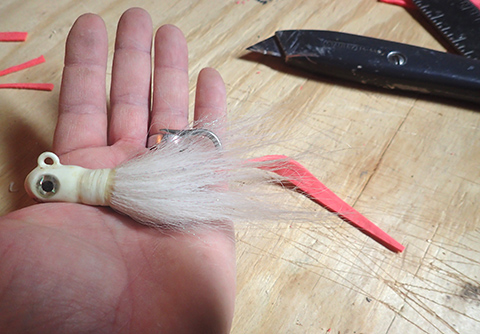 I mostly fish white and occasionally chartreuse in stained water. The biggest variables are its weight and the amount of hair. Both factor into both its profile and its buoyancy.

The description of the bucktail.
It is a lure that does not imitate a specific forage but represents them all.
Sound familiar???

Anyway striped bass spend most of their time on structure in current.

I really believe the same rules apply to trout. Matching a fly to the water you are fishing and the target depth may be one of the most important considerations. You want to make it easy for that fish to take your offering.
Nuances of weight make a huge difference.

I must admit, I do change flies a bit. Often I am not focusing on the fly coloring but rather the working depth.

This year I am going to trim down the color and material patterns and just tie up a few that I am fully confident in. The thing I am going to do differently. I am going to just vary the size and weight of these patterns to have more options when fishing a stretch of river. Lately, I have been very frustrated in my drifts. Some of my flies are too heavy, some not heavy enough…some are too light.

things to vary the weight.

That ought to cover it and get me one step closer to the one fly philosophy.

I want to talk about one fly and who out there does this.

I am not a one fly philosophy guy. There are to many different patterns to have fun tying and fishing with to only use one fly, imo.

However. that being said. I do sometimes fish with the same fly for a couple of weeks without changing the fly. If the fly already attached to the tippet is catching fish. And I am fishing the same type of water. Why spend time changing it?

I will often fish the fly already rigged till it falls apart, is lost or I just want to test a new pattern. Or same pattern in a different color.

I will choose different patterns, colors during different seasons. I’ve not yet decided which pattern is best for each season, spring to fall. When what worked well in the spring stops working I try a different patterns till I find one that works better, more takes. Generally brighter softer flies early, and darker maybe more dense material flies late in the season. Why be stubborn and stick with one fly when a different fly will more readily attract takes?

I will use a sparser hackle in slow water and thicker hackle in faster water, or soft hackle or stiff hackle depending on stream conditions or lake / pond fishing.

I prefer stream fishing to lake fishing. But often fish lakes when heavy rains make the streams inaccessible or dangerous or maybe a lake is just easier / quicker to get to. I don’t think I did any lake fishing last year. After a rainy spring the summer was pretty dry opening up a lot of river areas I usually could not reach. But still, as long as I was fishing the same type of water I rarely changed flies just to be changing it. If the one I had rigged was providing me the expected catch rate.

Why be stubborn and stick with one fly when a different fly will more readily attract takes?

As noted, I already employ a one pattern philosophy in targeting a different species. I am troubled about what in my mind prevents me from employing the same concepts to trout.

It is a wierd hang up.

I have noticed some patterns work well for me regardless of season. Some better in some seasons than others but its difficult to be completely scientific about it. How much influence does other anglers preferences have on me? Can i break away from those preferences?

I also want to test the theory that propper profile and weight is more critical than pattern.

Stephen, I’m not sure if we spoke about this but I did one fly last season. My fly was “herl and hackle”…so not techinically one fly but one basic pattern I tied in about 8 renditions…herl and stiff hackle, herl and soft hackle jun, herl and soft hackle sakasa, herl and stiff hackle with bead (I like my weighted flies with stiff hackle :)), small herl and stiff, small herl and soft…you get the point. While I personally do not feel one needs to permanently limit themselves to this strategy I do think it is a great learning experience for any angler. The commitment forces the angler to think of a fly more for “how they want to fish” the pattern than what the pattern is…this helps you build confidence in using techiniques rather than patterns to catch fish. I think it is a fun exercise for all anglers to try.

Right on Adam. Welcome to the forum.

Can you share a picture of your flybox or a few of your flies? 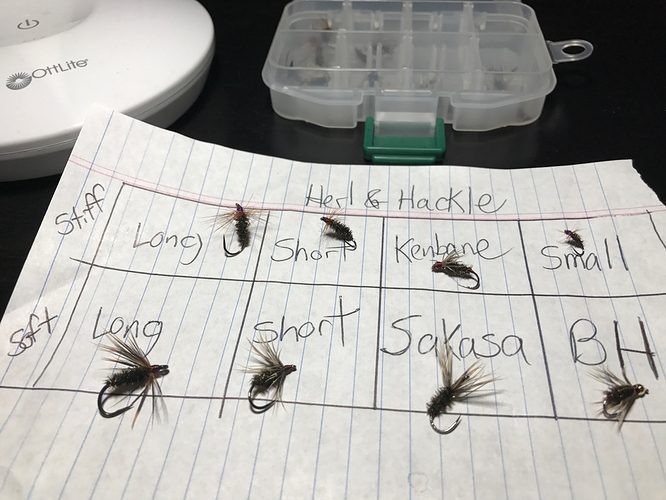 Here is a pic of my basic plan for last season. I bought a simple inexpensive 8 compartment box from Anthony Naples and did 8 variations on herl and hackle. Filled the box and fished that way most of the season. I was not perfect in only using these but I did largely stick to them. It was great to learn how often changing techniques and matching the fly to the technique used worked…rather than a “match the hatch” concept.

Oh I forgot to mention that as I progressed in the season I went to manipulations a lot over dead drift. Because of that I began to favor stiff hackles…and even if I wanted to fish deeper I used stiff hackled bead heads…

Very interesting, and thank you so much for posting the pic of your flies. I think you had mentioned to me that you were doing a herl and hackle only season but my imagination of what that meant was different than your above lineup. I thought it was more of a natural materials constraint and that there would be more color variety in your box…I also did not know that it was sticking to the above pattern.

I am impressed by your discipline. Really, that is pretty awesome.

Are the first two soft hackle flies on salmon hooks? I like the look of those hooks.

I guess what took me by surprise was that all the flies are large bodied. I sort of imagined some thread bodied versions with a herl thorax. If you continue with this experiment and such a variation is not a foul. I would wonder how a thinner bodied variation would work next to the wide. I guess thinner bodied versions of the above would be considered a different pattern.

I sometimes alternate between thick and thin when I fish. Sometimes it seems they have a preference of one or the other, but my tests are not scientific enough as sometimes there are other factors in the flies that I throw that are different…like color and type of hackle.

Seeing that line up has me thinking about a lot of things. I would like to try that limitation sometime.

As for my recent experiments. I did tie up a bunch of weights of one pattern, but was weak on my first outing and ended up stinging some fish with the creature instead.

For sure the first soft hackle in the “long” category is the Daiichi Salmon hook #6…I do not think the second one is… The Salmon hook is a fairly heavy hook that Rob L. introduced me to for sinking flies a bit faster.

The flies in the picture were some of my first ties and I used 2 or more strands of peacock herl…later I varied that using 1 only to make a “thinner” body. I also did some flies with a thread tag tail…

You for sure are right on stiff hackle for the places and presentations you mentioned, but you can also sink the flies deeply using less hackle and heavier hooks or even beads… There is a “west country” tradition in the UK of stiff hackled wet flies…the best book on the subject is by Cutcliffe. He used plunges to sink the flies…and I find I do that too with both stiff or soft…but the stiff seem to “resist” the pulse and stay deeper longer…?? I have no science to say for sure on this next point…but my opinion is that stiff hackled wet flies pulsed emit more water vibration than soft hackles and I think fish use their lateral line to feel for prey a lot - coming out of hiding spots to pounce.

When I was in Japan, Go-san showed me some manipulation techniques for SOFT hackled flies on the surface…long big hackles create a lot of surface disturbance which may attract a prey or defensive hit.

I recommend trying the limitation if you are curious.

I will need to try all of it.

stiff seem to “resist” the pulse and stay deeper longer

Agreed. I don’t think the soft hackles help in any way with getting a fly deep. The current grabs the stiff hackle much better. Each type of hackle creates different motion and effects in the water.