Finally some time to tie flies

Yesterday, I finally had some time to tie some flies. The past month or so had been really busy and I just haven’t had time to sit down in peace and quiet. Yesterday was more of what I call my experimental tying days. I didn’t tie any particularly specific patterns or any known patterns. Some of what I tied were modifications of patterns I use and others were aspects of various flies that I thought when combined may work well.

I tied about half a dozen of each of these yesterday. 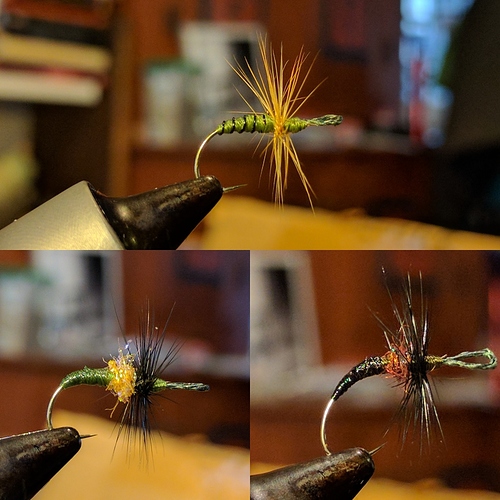 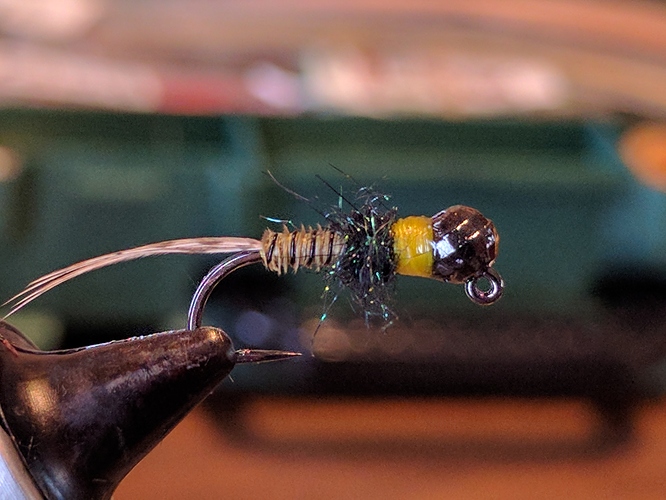 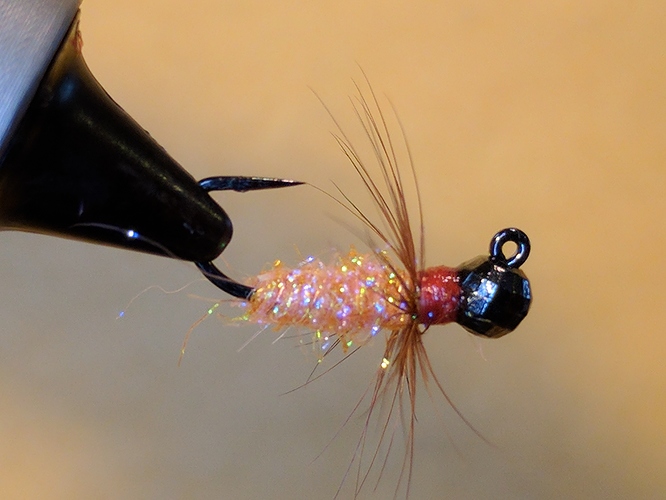 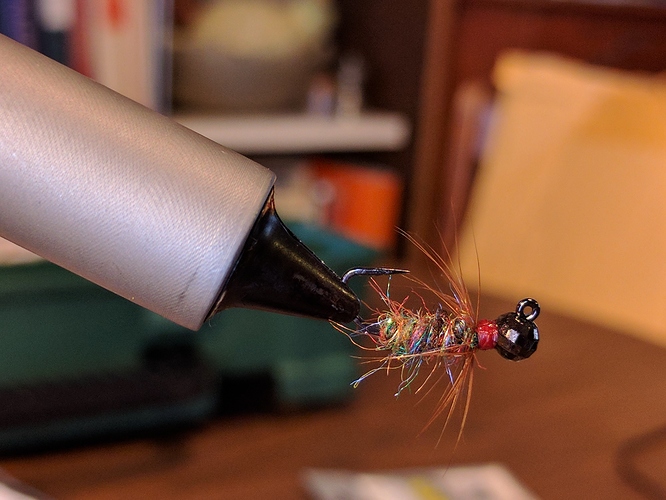 While you cannot see it in the photos, the last two bead heads have copper uni wire ribs and holographic tinsel shell casing on top.

This last one turned out rather ugly, but I liked it better with the darker ribbing. 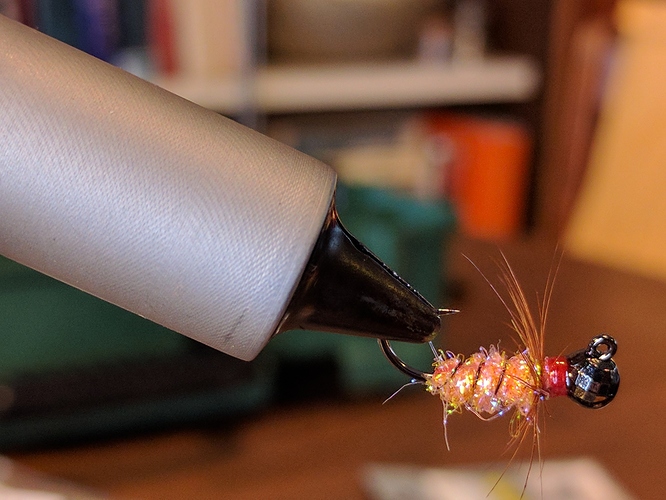 Thanks @Kookagee. If you want to know more about them, I posted a little more information on the blog here.

Very nice tying. I am glad that somebody else does experimental tying too.

I recently bought a small selection of Jamiesons Shetland Spindrift wool ( the wool used in the Killer Bug) and have been ‘playing’ with it. 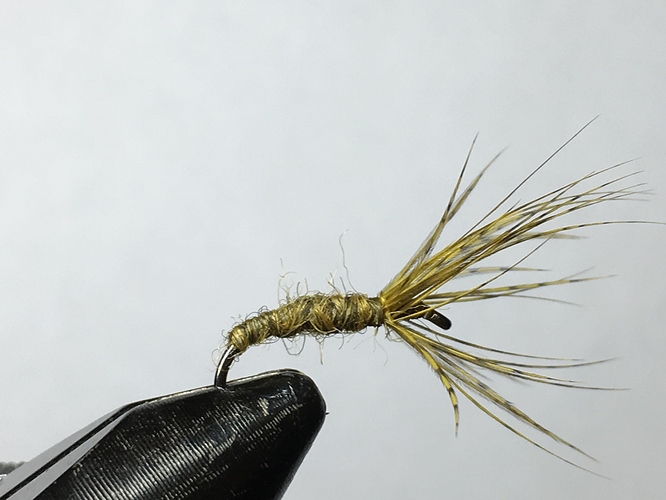 I really like that color David, it would certainly work well where I live.

It’s been snowing all day, 8" (20cm) so far, and town was full of crazy tourists, so I mostly stayed in today. I got some more time tying in and made a couple of changes to a kebari that worked really well for me last year. I still tied some of the original too. 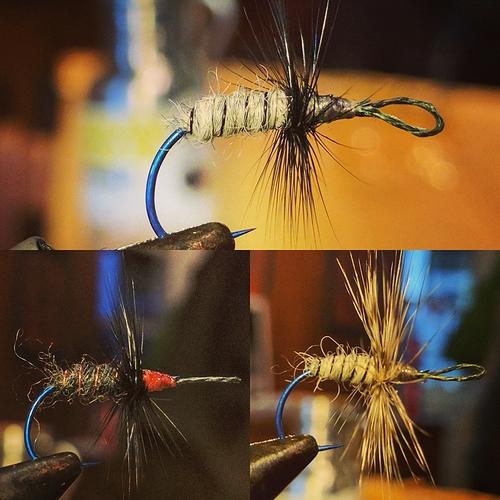 The colors turned out a little strangely in the photos as the to and bottom right both are tied with the same body material.

Has anyone else been tying recently besides @davidsr and me? If so, what have you been up to?

I have been putting together my travel tying kit. I will use it as my primary vice for several months as I did my Nissin Mini rods before I took them to Japan. I want to make sure I am familiar and the kit works well on its own before I go someplace and expected to do as well as if I were home. The Marco Polo kit is good yet I want my materials box to be small and just as good so I am using the same box that houses the vice. So far, I have succeeded but just need to pluck some feathers and figure out a dubbing dispenser.

Your flys look good!ooks like you are back at it. I will be soon.

Thanks Adam! Yes, I think I’m starting to get my tying back up to par. It usually takes a few sessions to do so.

What kind of vise are you using as your traveling vise?

I really like that color David, it would certainly work well where I live.

Yes. I think for ‘buggy’ type flies there are quite a few of the colours in the Shetland wool range ideal. I am pretty sure that the ‘Bracken’ colour I have used is the one sold by @CM_Stewart . It is nice to tie with too.

That’s good to know, I didn’t realize that was the one he sold. Many of the places that sell it online here in the US are often sold out of the more “natural” or “buggy” colors. I started tying with more wool yarn last year and have really enjoyed tying with it and found it very effective. The flies in the last photo collage are all tied with wool yarn. The top and bottom right are a light grey and the bottom left is a heather charcoal.

For way it’s worth (and that’s likely not much!) the eyes on mine aren’t actually silk. It was actually some 50 pound braided fishing line by PowerPro that I got on clearance at my local sport shop.

Anyhow. I find it hard to say. I fished that style of hook exclusively two years ago. At the time I thought I was getting more hook ups, but after I went back to using eyed hooks I think it’s more that my tenkara skills had just improved slightly.

I do think that they impart a little more action than eyed hooks do. Enough for me to use them exclusively any longer? Not in my opinion. But I do still tie flies with them and fish with them. I also think I tie the eyes on mine a little bigger than many other people do (something I learned on a Japanese blog a number of years ago).

Wool yarn FTW. I’ve only used the Smperfli killer bug yarn from J Stockard, but it’s been great so far. To my inexperienced eyes, it appears pretty similar to hares ear dubbing when tied, and for me is a lot easier to work with than dubbing which is a big win in my book.

Question about using wool yarn: do you all use wool for wets/subsurface flies? I assume that wool yarn wouldn’t be effective for dries, although I’ve never tried one.

Yes, I use it for wet flies. But the main reason for that is because I rarely use dry flies.

That being said, I have used it for dries too. If it is a multi-ply (not math, but a multi-strands) yarn, I have gently separated them (for ex: cut a 6"/15cm piece and gently pull them apart) and used the thinnest strand to tie dries. It really depends on the type of wool though. Different wool works better for dries and other works better for wet. It depends on how fine or course the wool is, what breed of sheep it came from (often determines the end use of the wool), what grade of wool it is, and how much lanolin remains in the wool; amongst other things.

Can you tell that I used to breed sheep?

Not to mention that I may or may not have been known to pick up some knitting needles when I was younger.

Whoh that’s rad @peder! I’d never given thought to all the differing properties of wool yarn based on the breed of sheep but it totally makes sense.

I’ve been happy with how easy it is to separate my yarn from one big strand into three little ones. I’ll have to do some flotation tests with one strand on a dry fly hook with some elk or calf hair wing.