Answer: Not as much as most anglers believe. For any color to be seen (by us or fish), that color has to be present in the light illuminating the object being viewed, in this case a red rod. The rod is red because the red light hitting it is reflected back into our eyes, while all the other colors of light hitting the rod are being absorbed by it.

Air and water have very different properties of light transmission and absorption, with air freely passing on all the visible colors freely, while water absorbs red light in the shortest distance of all the colors available because red light has the longest wave length and the least energy. This process is known as Color Shifting.

Red shifts first to Brown, then Gray, and eventually to Black, which is a function of distance and depth in water in as little as 10 feet or less. Particulate matter in the water and the water’s color will also absorb red light much faster than clear water, in a shorter distance, so the fish under the water get a very different picture of a red rod than we anglers get above the water.

Blue, whether light or dark, appears to be a very popular rod decoration color. Fish can see purple up to 65 feet away in gin clear water, and green is also a long range color that fish can easily see from farther away than they can see red painted rods. While those Fire Engine Red Rods are highly visible to us, nobody needs to loose too much sleep over all fish they are scaring out of their whits in the water, so fish those bright red rods with confidence and joy. The fish are taking little note of your rod color if it is red…Karl.

I have the tenryu furaibo tf39 red rod and ive noticed no difference in my catch rate. Ive also never noticed a difference in my clothing color. As long as im moving cautiously and thoughtfully and presenting my fly without beating the water to a froth then I personally dont think it matters. At least on the mountain streams I fish. Maybe on a highly pressured spring creek with slow flows a red rod might no be the best choice?

Camo or no, the two biggest give always to spooking fish are Motion and Contrast. Go Low and Slow and dress to blend in with the fishing background, avoiding Light against Dark and Dark against Light at all cost, staying in the shade as much as you can will lmprove your Stealth Skills Greatly. Dark rods seen against a light sky are also a real giveaway but, until they develop background color matching rod technology, we have to just do the best we can and educate ourselves enough to be aware of the problems and challenges involved.

Ryan, I have to believe that if Tenryu believed that a red rod would scare fish, they would have chosen some other color to paint their rods. As it is, painting the rods red, probably, costs them some rod sales. But your fishing experiences in fishing a red rod, while not exactly scientific proof, goes a long ways in supporting the efficiency of a red rod in the catching of fish. It is very hard to argue with success. Tight lines.

I can’t cite any scientific studies to back up the video’s opinion, or Dr Tom’s and my preference for the effectiveness of camo for fishing but I do have an interesting anecdote.
One day I was fishing and wet wading a stream wearing this Aqua Design “Green Bayou” camo shirt, a camo hat, and AF tiger stripe ABU trousers. I had exited the stream and was walking the wooded and brushy bank trail to bypass a long, wide pool that was too deep to wade with high banks that I could not make a decent presentation into.

I walked around a corner in the bank trail where it intersected another trail further away from the stream and an attractive young woman; the only person I saw that day, was walking alone towards me. She was about 20 ft away and looking in my general direction but hadn’t seemed to notice me so I immediately stopped. I didn’t want to frighten her, and hoped she’d notice me before she got much closer. I let her take a couple more steps and said “Hello”. Her eyes got real wide and she said “You just appeared out of the trees.” We wished each other a good day and continued our separate journeys.
(I replaced the red DIY toothbrush hook remover with a green one after seeing this photo) 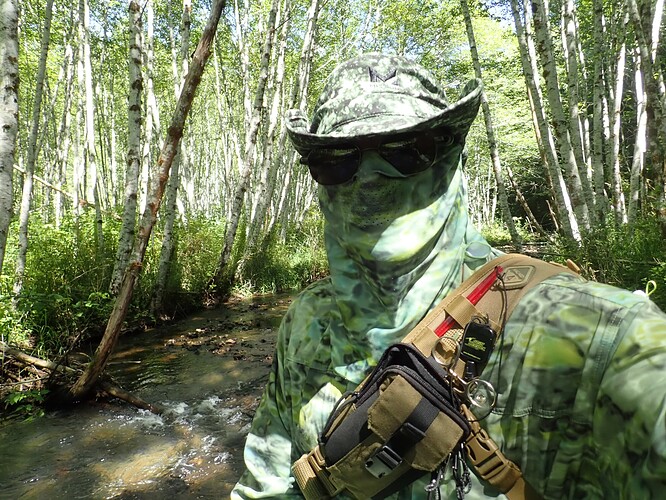 Right or wrong, I like camo. To borrow from the end of Dr Tom’s “The Short Game” essay in Tenkara Angler “If you meet a guy in camo, crawling around in a mountain rivulet,” and it’s not Tom Davis, I might just be the “other insane and eccentric angler!”

Article by Tom Davis I enjoy fishing small and technically challenging streams. Actually, I think you might call them creeks, brooks, rivulets, or the like, rather than streams. Streams connote that there’s a good amount of water flowing, but the...

Brian, thank you so much for making this information available on the board; it really illustrates the important things we have to deal with as anglers.

My first experience with camo clothing was experienced during a deer hunt, in which I did a little fishing. I had never tried to fish before in full camo, and I thought I would have a much easier time sneaking up on the trout than I did. It was a big disappoint for me. Camo clothed or not, my movements along the stream were just as obvious to the fish. Camo can help in breaking up our outlines for sure but, trout being prey as well as predators makes them extremely sensitive to any and all movement that might be a predator approaching them. And in many cases, the camo pattern, itself, calls attention to our presence with High Contrast black and white elements included in the design, which is really meant for viewing at much greater distances than are involved in trout fishing. But hay, keep doing what ever is working for you with my best wishes…Karl.

It probably matters to varying degrees in various circumstances. I think the camo could also work like a confidence fly pattern. If you feel more stealthy you might move and fish more stealthy.

Shadows and movement will send a fish into hiding vs whatever color the angler is wearing or carrying. I’ve worn white shirts and it doesn’t seem to make a difference to the fish.

What most anglers do not realize is that fish have evolved in an environment where both their predators and prey use camouflaging to obtain their food and protect them from being eaten. So, necessarily, fish have become very adapt at recognizing camo patterns on the bugs they eat and on the things that eat them. They are pre-programmed to detect patterns and movement, and hard wired to react to movement. When the eye detects movement, the fish’s brain is automatically excited. The only decision to be made is, is it time to eat or run for your life? If the object is small enough to fit in your fish mouth - Eat! If it is bigger than you, Hide or run for your Life.

So their is a very real possibility that wearing camo clothing may make the angler even more visible to the fish we are trying to catch, since it is something they are always on the lookout for anyway. In the above video, the Dark Brown and Dark Olive fishing vests were the least visible clothing from the fish’s point of view, with out any camo patterns present on them.

People notice red. From fast food logos to flags, red is the color. This research supports the notion that red is the color humas care about the most, transcending cultures (there is still debate around this though).

In the development of the fast-paced video game Team Fortress 2, developers found that the first thing a player’s vision could resolve was silhouettes. In turn, the developers designed enemies with distinct silhouettes. Similarly, fish have white bellies to hide their own silhouettes from predators lurking below.

Usually, I try to keep my shadow off the substrate where I’m casting all while being careful not to become backlit. Color is a somewhat secondary concern for me.